Mark Byrne, Olly Lee and Brandon Hanlan all find the target as Gills dominate proceedings at ME7 to advance to the FA Cup third round.

Gillingham progressed to the Third Round of the Emirates FA Cup with a dominant 3-0 win over Doncaster Rovers at the MEMS Priestfield Stadium on Sunday afternoon.

The Gills were 2-0 up inside a quarter of an hour thanks to goals from Mark Byrne and Olly Lee, before Brandon Hanlan’s strike midway through the second half secured a fourth home win in succession.

Gillingham manager Steve Evans made one change to the side that were beaten by AFC Wimbledon last week. Stuart O’Keefe dropped out of the side after picking up an injury in that game, with Tommy O’Connor taking his place. Matty Willock returned after injury, and was included in the squad for the first time since the home win over Bolton Wanderers.

Gills had the first shot just after a minute. Alfie Jones found Olly Lee on the edge of the box, but he turned his effort just wide. Moments later the Gills looked to be denied a spot kick as Brandon Hanlan was hauled over at the far post as he looked to get on the end of Barry Fuller’s cross, but the referee was unmoved.

The home side were having the better of the early exchanges, and had another opportunity when Mikael Mandron headed Lee’s corner wide at the back post. With ten minutes played, the Gills got the goal their early pressure deserved. Hanlan drove into the box, and the ball eventually dropped the way of Mark Byrne, who fired into the corner to make it 1-0.

Just a few moments later, the Gills doubled their lead. Tommy O’Connor found a pass over the top to Lee, who calmly chipped the ball over Seny Dieng, who got a hand to it, but was unable to keep it out. 2-0.

At the other end, Doncaster had their first chance when Kieran Sadlier found room on the edge of the area, before seeing his shot deflected just wide of the post. After 22 minutes, the Gills really should have added a third. Hanlan reached the byline, before squaring for O’Connor, who put his shot inches wide of the post.

Doncaster had their best chance with 37 minutes played, when James Coppinger crossed for Rakish Bingham, who was unable to direct his header on target. On the stroke of half-time, the Gills came close to extending their lead, as Mandron headed over O’Connor’s free-kick from the right. 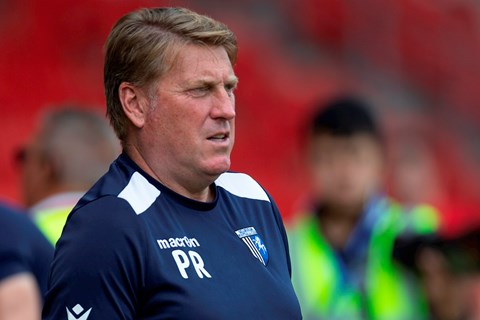 Brandon Hanlan had the first opening of the second period, driving down the wing before seeing his dangerous low cross cleared in the six-yard box. Coppinger had the away side’s first chance, slaloming between challenges before hitting a shot straight into the arms of Jack Bonham.

With 67 minutes on the clock, Gillingham got their third. Hanlan chased down a long ball, beat Joe Wright on his outside, before beating Dieng at his near post. 3-0.

At the other end, Doncaster had the chance to get one back almost immediately, but Bingham failed to connect inside the six-yard box. They had another chance with 15 minutes remaining, as Reece James’ cross picked out substitute Kwame Thomas, who headed over the bar.

Hanlan almost had another with ten minutes to go as he burst into the area, but couldn’t keep his shot down.

In the first minute of added time, Gillingham made their first change, bringing on Matty Willock for Hanlan. A moment later they made their second change, with Mikael Ndjoli replacing Mandron. With the final whistle looming, they made their final change, as Barry Fuller was replaced by Lee Hodson.

Willock’s first action was to shoot wide from just inside the area, and that proved to be the last moment of the game as Gills advanced to the third round.