Gillingham manager Steve Evans was happy with the improvement from his side in Wednesday’s 2-0 win over Shrewsbury Town at MEMS Priestfield Stadium.

Two first half goals were enough for the Gills, with Stuart O’Keefe giving them the lead, before Olly Lee doubled their advantage from the spot. 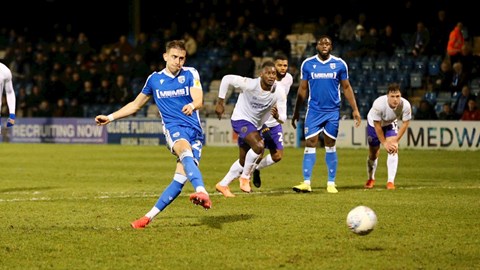 Evans said: “We draw at Rochdale, which on any given day, a point is hard to get, as we’ve found out over the years. We were a notch down, and I told the players after the game, but they trained really well yesterday. We worked on a particular shape and the way we wanted to play tonight.

“I thought they carried it out to a man, I thought we were outstanding in spells. On another day, we win more comfortably.”

The Gillingham manager was happy with the showing from Ben Pringle, who returned to the side in place of Brandon Hanlan. He said: “He’s been getting stronger and getting fitter. I had Rochdale earmarked for him, but we went for a little change in system.

“He’s a good kid. He works hard. He’s fit now, we recognise that, and we’ve said to every player at the football club that we pick this with opposition in mind, we pick this on what you do in training.”

Evans was also pleased with the effort of John Akinde, who made his home debut against Shrewsbury. He said: “When the big man’s got that strength and power that we know he's got, he doesn’t get a lot of decisions. John was very good, and the front two were very good.

“When he gets into his strike he’s powerful, and he frightens defenders, as you’ve seen with the penalty.”