Ex-Gills striker chats to the club's media team to reflect on his career at MEMS Priestfield Stadium.

The Canadian, now 33, joined the Gills in January 2008 from Rushden & Diamonds, having been on trial with the Kent club earlier in his career.

When Jackson first came to England he joined the Gills as a schoolboy, but was unable to earn a scholarship when he turned 16. Despite this minor setback at a relatively young age, it did not deter his emotions for the club as he revealed:

“I’ve always had a love for the club because it was one of the first clubs I saw when I first came to England,” he revealed. “I remember going to Priestfield and the first Gills game I watched was against Wolverhampton. I sat in the Gordon Road Stand and there was a massive pillar in the way! It was the first game and I couldn’t see anything, but I was just buzzing. I just had this thing for the Gills!

“When I heard they were interested it was at the back of my mind as I was getting on with my professional career and you’re focussed on doing well. To know that they were the ones that put the money in to get me out of the Conference and into League One, it was just funny.

“It was a great time and I was very excited because it was like coming back to where I thought I was going to start off. Now I was in the first team I was able to make something happen which was good.”

Jackson’s first six months at Priestfield did not end well as the Gills were relegated into League Two following a defeat to Leeds United at Elland Road on the last day of the season, a game in which Simeon scored the opener. This would be the first time the club would be competing in the fourth tier since 1996.

His first full season however ended up being one he would never forget.

The striker enjoyed a good first half to the season scoring 11 goals in the league by the New Year. His first goal of 2009 was easily one of his most memorable. The Gills hosted Premier League side Aston Villa in the FA Cup, who at the time were chasing Champions League football.

Despite James Milner giving them an early lead, the striker caused bedlam at the Priestfield after half-time by firing the Gills back on level terms. A controversial penalty won the game for Villa, but Jackson looks back on what was a memorable day in his career, saying:

“It was my first real big FA Cup tie; live on TV and Priestfield was rocking. It was just a really good day. They had really good players, but we were confident going into it. We knew we were at home and thought we may as well go for it, but that bit more experience and quality played out on the day from them. We gave a great account of ourselves and obviously getting a goal was great.” 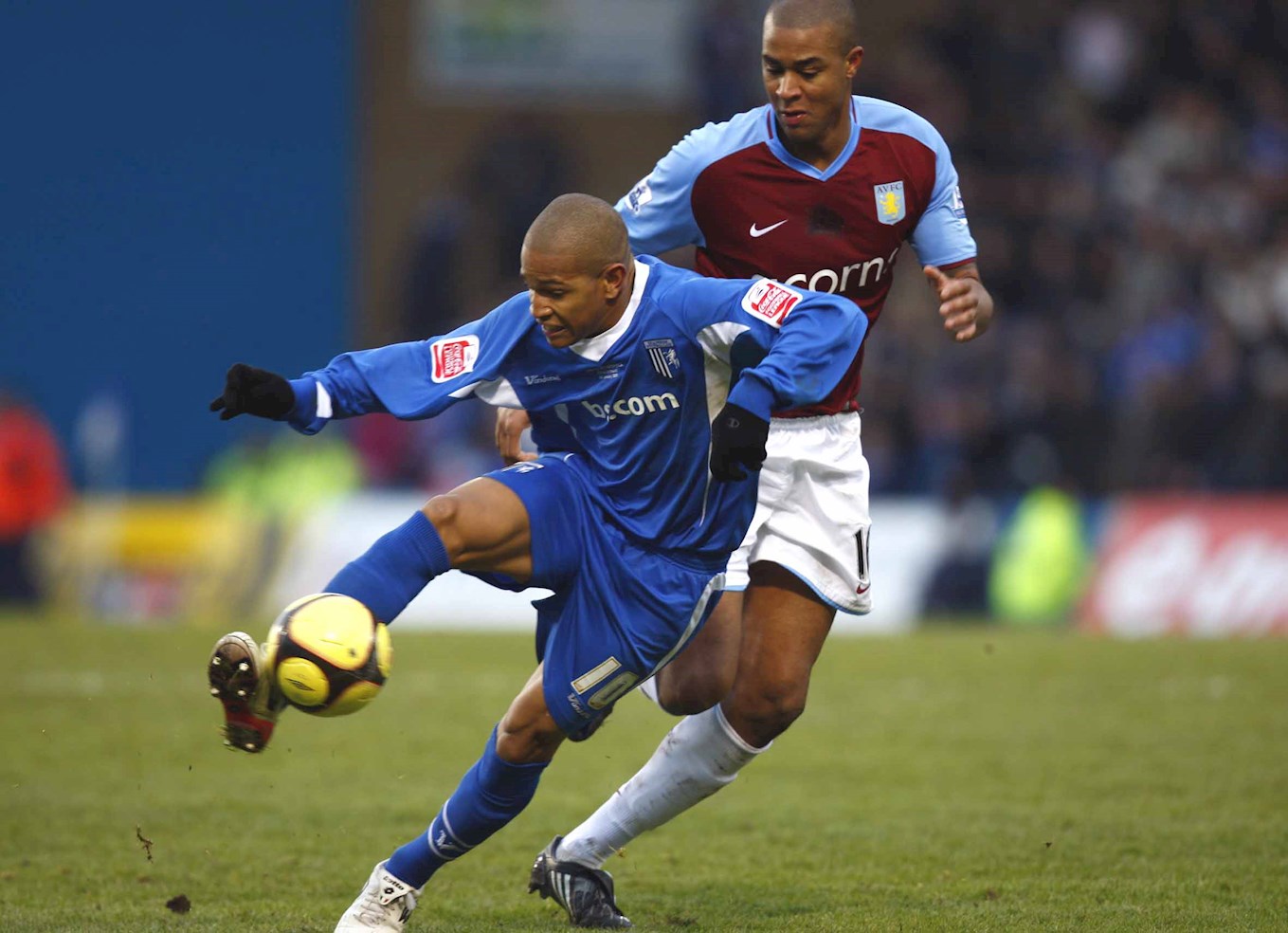 Jackson’s great form continued, as his goals helped fire the Gills into the play-off places.

He notched up 18 goals as the Gills finished the season in fifth place, setting up a semi-final against Rochdale. In the first leg at Spotland the game ended 0-0 and Jackson reminisced on the personal disappointment, but remembers the confidence that was created when looking back.

The Canadian said: “For me it was weird because I was really disappointed after the first game because we didn’t play particularly well and I didn’t play particularly well. We felt we should have done well, but we thought that they didn’t really threaten or hurt us in any way and they were at home. The atmosphere wasn’t great, so we knew coming back home that we were in the ascendancy.”

The second leg proved to be one that Gills fans would never forget as Jackson built the foundations of his legacy at the club.

Jackson scored twice to send Mark Stimson’s side to Wembley in a 2-1 victory. After opening the scoring Chris Dagnall equalised for the visitors before Jackson’s second half penalty sent the Gills to the new Wembley for the first time.

The then 22-year-old credited the emotional support of his teammates for helping motivate him on the night, saying: “The boys were just really supportive, I think they could kind of feel that I was a bit disappointed from the first leg. We stayed in a hotel before that game [the second leg] and I remember coming to the game on the coach and they were saying: “It’s your day today.” I thought ‘decent’, the boys have given me some support, it is my day today. We went out there and we did really well. I was lucky enough to get two goals and get us to Wembley which is just an amazing achievement.”

The win set up a play-off final against Shrewsbury Town, however, this was not like any other final.
Earlier in the season, the Gills travelled to Shrewsbury and were beaten 7-0. Playing them in the final added more motivation for the squad as Jackson revealed:

“From day one, as soon as we knew it was Shrewsbury, we thought “perfect”. No one had to say anything. It was a play-off final at Wembley and to put them in the picture, we were like ‘yeah’. When you lose 7-0, it’s just the embarrassment of it. I still remember the meeting on the Monday and having to go through all the goals again. Seeing what happened, who was at fault, and where we went wrong. To get them back in a final was really good and we knew what we wanted to do for more than one reason.”

Heading into the game Jackson had the nerves of playing in such an occasion at Wembley. However, an idea by Chairman Paul Scally helped settle his and the rest of the squad’s nerves. Jackson recalled it all saying:
“One of the best things that could have happened to us was that the Chairman got us to go to Wembley a few days before.

He got us to walk around the stadium and he was saying to us how important it is to get the feel of it initially. It can be a daunting place with 60,000 fans there and I hadn’t competed in that sort of environment before. To have a walk around and get a feel for the ground took out that initial fear factor. You still have the nerves, but it’s an amazing occasion and in my mind I was always told play the game and not the occasion.

“I felt confident, a little bit of nerves, but I just remember coming out of the tunnel and you’re anticipating what’s about to happen. Then this fire just blew up as we’re walking out and I nearly wet myself! It kind of shocked me and it was really powerful actually as it brought me back to the present instead of thinking. Then you walk out and do the formalities and you just want to get the game underway.”

It was tightly fought game with chances lacking and heading into stoppage time the Gills had a corner.
Jackson, who was arguably the smallest player in the penalty area, was the one to win the header. He broke down his thought process in the moment saying:

“Usually I’m meant to be sticking on the goalkeeper, but I just went for it and made my mind up before the cross came in. It looked like I was free and I closed my eyes and headed it.”

His header ended up in the back of the net and his 21st goal of the season had the Gills on the brink of promotion. Jackson had written himself into Gillingham folklore, sending 30,000 fans into pure ecstasy as they put the heartbreak from 12 months beforehand behind them.
The emotions at full-time are still remembered by Jackson to this day as he looks back on the club hitting its pre-season target.

“It was relief, satisfaction and pride,” he added. “Knowing that we set this target and we worked towards it and we did it through the play-offs which I think is the toughest way to do it, but the most rewarding.”

The next season began in a similar fashion to how the previous one ended.

The Gills beat Swindon Town 5-0 at Priestfield and Jackson scored a hat-trick in that game. It was the perfect end to what had been an incredible three months for the Canadian striker.
He recollected his feelings at that time as his stock within the game continued to rise, saying:

“When you do get promoted, you carry that momentum. The club’s buzzing, the players are buzzing. I was over the moon because I had just come back from making my debut for the national team. I remember coming into the game thinking that I had to kick on now. It’s a new season with new targets. It was a great way to start.”

However, this was as good as things got for the Gills as they struggled to find any consistency.
Heading into the final game of the season safety was in their own hands as they travelled to Adams Park just needing a point to guarantee safety against already relegated Wycombe.

If not, the Gills just needed one of three results to go in their favour.

On a day that was filled with such promise for Mark Stimson’s side, it proved to be one of the most difficult days in the club’s recent history.

Wycombe beat the Gills 3-0 and Jackson missed a massive chance with the home side only 1-0 up. To make things worse, all the results went against the Gills which saw them relegated.
The miss is something that still hangs over Jackson to this day and recalls the long-term impact it had on him. He said: “I just overthought it and I ended up putting it over the bar. Relegation was just a heavy, heavy feeling and it took me a while to get over that.”

That proved to be the Canadian international’s last ever game for the club as he moved onto Norwich and helped them gain promotion to the Premier League the following season.

Despite ending his Gillingham career on a sour note, Jackson holds his time with the Gills in high regard and he shows great pride in what he achieved while at MEMS Priestfield Stadium, saying:
“Being able to go in and do something really successful with the club, it always leaves a special place in your heart. I think for me that’s what it is.

"I’m lucky to have those memories and experiences. You always want the club to do well and I’m glad I could play a part in the club’s history.”