Last gasp drama in Sunderland as Mika Mandron fires home with the last kick of the game to earn Gills a point.

Mikael Mandron fired home with almost the final kick of the game to earn the Gills a point at the Stadium of Light in a 2-2 draw with Sunderland on Saturday.

Sunderland had led twice in the second half, with Kyle Lafferty firing in a near post header, before sliding under Jack Bonham after a good pass from George Dobson.

However, they were twice pegged back by the excellent Mandron, who first produced a poacher’s finish from the edge of the six yard box, before drilling a fine effort into the bottom corner from 18 yards to earn the Gills a deserved draw at the death.

Gillingham manager Steve Evans made three changes to the Gillingham side who were beaten 2-1 by AFC Wimbledon last week. Tommy O’Connor, Olly Lee and John Akinde all dropped out, with Jordan Graham, Jordan Roberts and Mikael Mandron coming into the XI.

Gillingham had the game’s first effort inside the opening three minutes, with Stuart O’Keefe trying his luck from range, but dragging his shot wide of the post.

Sunderland’s first opportunity came after 22 minutes, with Chris Maguire’s deep cross landing on the head of Tom Flanagan, who was unable to divert his header towards the target.

They had the best chance of the game soon after, as Luke O’Nien’s cross caused problems in the Gills box, and Jack Bonham had to be alert to keep out Lynden Gooch from close range. 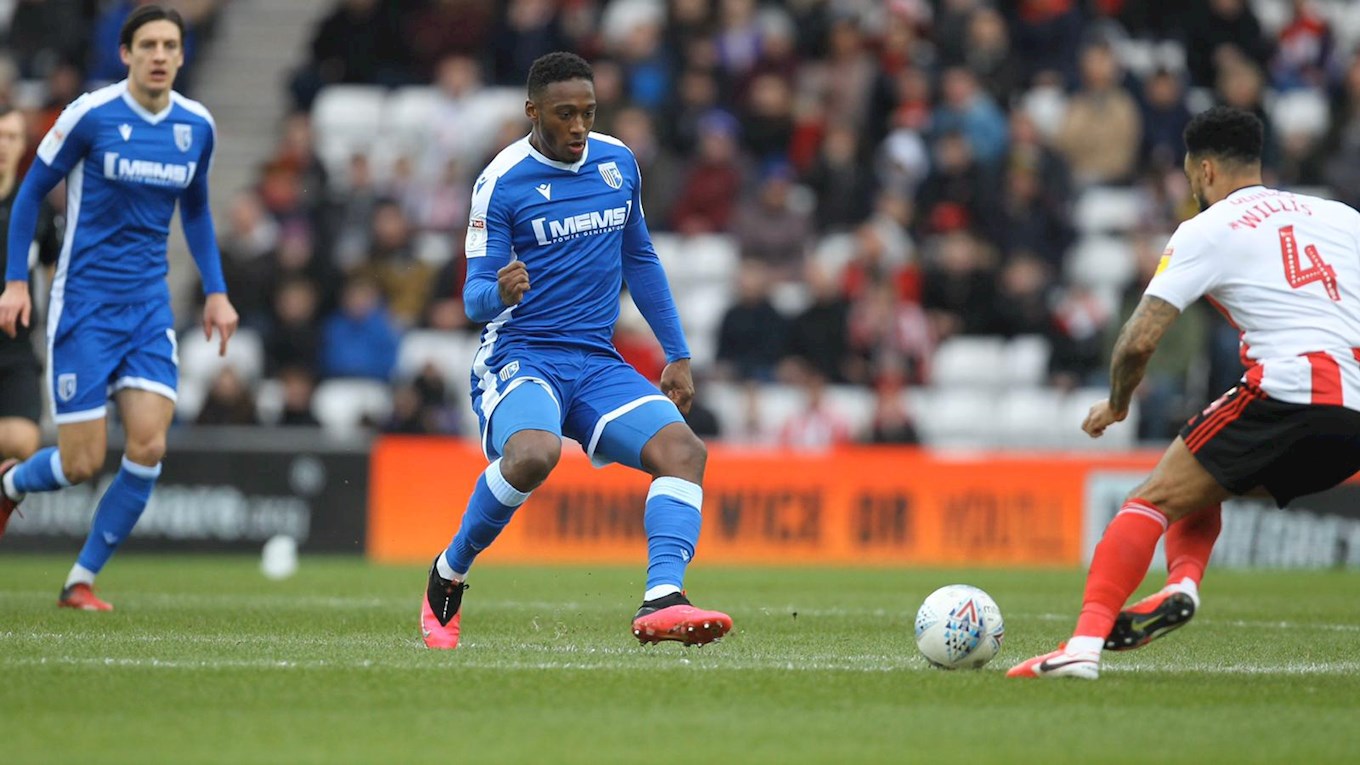 The Gills threat was coming from set pieces. Jordan Graham’s corner resulted in a dangerous ball in from Jordan Roberts, that Sunderland did well to clear, before a Graham free-kick was punched straight to O’Keefe by Jon McLaughlin, but the midfielder could only manage to head it back into the arms of the ‘keeper.

It was the home side who were having the better of chances however. Maguire turned well in the Gillingham box, before stinging the hands of Bonham, who turned it around the post for a corner.

O’Nien also tried to test the Gills stopper, but saw his shot from the edge of the box deflected into the side netting.

Sunderland had the first opportunity of the first half, Chris Maguire taking a speculative shot from a free-kick around 25 yards from goal, which never looked likely to threaten Bonham.

At the other end the Gills had a chance when good work from Mikael Mandron helped set up Jordan Roberts, who drilled shot was parried clear of danger by McLaughlin.

Moments later Sunderland had the best chance of the game so far, as Denver Hume pulled the ball back to Kyle Lafferty, who fired his effort wide from near the penalty spot.

With 57 minutes on the clock, the Gills made their first change, with Olly Lee coming on to take the place of Jordan Graham.

Sunderland were now having much the better of the game. O’Nien did well to reach the byline on the right, before sliding in a low ball that was gathered well by Bonham.

The Gills then made their second change, with Jordan Roberts making way for Tommy O’Connor. Despite the Sunderland pressure, the Gills then had their best chance, as Alfie Jones played in Brandon Hanlan, whose shot was palmed away by McLaughlin.

With 63 minutes on the clock, it was Sunderland who went ahead. Hume’s cross was headed in by Kyle Lafferty at the near post to make it 1-0.

The Gills made their final change with around 20 minutes still to play, John Akinde coming on to replace Stuart O’Keefe.

With 17 minutes still to play, the Gills levelled it up. Ogilvie’s long throw caused confusion in the area, and it eventually poked in by Mandron, to make it 1-1.

Two minutes later the Gills had another half-chance, O’Connor’s corner finding its way to Hanlan, who headed over. Seconds later they had an even better opening, Mandron collecting the ball in the box, before bringing a fine save from McLaughlin who dived to his left to palm away an excellent effort.

The Sunderland ‘keeper was called into action again from the resulting corner, saving well from Jack Tucker’s header.

However, with just eight minutes remaining, Sunderland regained the lead, George Dobson played a ball through to Lafferty, who slipped the ball beyond Bonham into the net. 2-1

But when the game looked gone, the Gills rescued it with almost the final kick. Ogilvie’s long throw was headed on by Akinde, and arrived at the feet of Mandron via Olly Lee, who fired in from the edge of the box to earn the Gills a vital point.