One-nil down and with seconds on the clock last Tuesday evening, winger Jordan Graham confidently placed the ball on the spot before demonstrating the perfect balance of power and precision. His last-gasp equalizer set-up a penalty shoot-out which saw Gills edge past Coventry at MEMS Priestfield Stadium, and into the next round of the Carabao Cup. 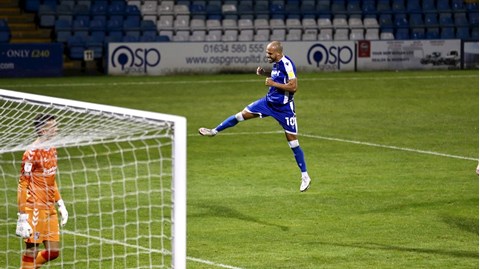 Ahead of this weekend’s trip to Wigan, he addressed a number of topics in front of the media from playing in empty stadiums to personal ambition.

“I enjoyed my time here from January up until the season got suspended. I thought it was a really good group and I enjoyed working for the gaffer. I feel he gets the best out of me. He keeps me switched on in training and out on the pitch.

“I feel personally that I’m getting to a really good stage where I can provide top level performances. My body feels good and mentally I’ve got loads of confidence!”

On his 94th minute equalizer against Coventry City

“Goals and assists are a personal target of mine. As a forward player you are expected to contribute more goals. When the penalty came about on Tuesday, I wasn’t going to let anyone else take it. I’m glad to get off the mark and looking to get more goals this season.

On his ambitions in Football

"Regardless of who we play, I want to win. It’s sad what they are going through, I wouldn’t wish that on anyone, but it’s none of my business. On Saturday at three o’clock, the team will be doing all they can to get three points.”

“The main thing is, the majority of the squad is really young now. We lost people like Max (Ehmer) who have that older head. Most of the faces that have come in are pretty young, around 25 or younger, so there is more energy and I think the gaffer has brought in some really good footballers. That’s going to start to show. We are going to show that we are able to play.

“With this group now, there are a lot more technical players. We can get the ball down and create more on the floor. It’s a young group and a group full of winners.”

Being a role model

“I feel it’s my duty to help and support our young players and give advice. I remember what it was like going into a changing room at Ipswich and Aston Villa.

“I don’t feel like I am an older pro… yet. Because the group is quite young, it can be daunting, but I’m quite confident.

“The younger players might not see me as an older player but I’m experienced in where I’ve been and what I’ve gone through. I’ve been making them feel comfortable. When a player feels comfortable you get the best out of them.”

“It’s not great, fans sitting at home. It’s a situation where beggars can’t be choosers, because I’m over the moon to have football back. The lock down made it evident how important football is in our lives. It’s massive. I’ve missed it like mad.

“I can’t wait for fans to come back. It makes a big difference to everything; it’s not the same without them.”