Paul Raynor spoke to the media via Zoom on Thursday to preview Bristol Rovers' visit to ME7.

Talk us through training this week following Tuesday’s game...

It was disappointing after a good first-half performance against a very good side, nullifying the threats of what they can do to teams. It was a little bit disappointing in the second half, but we had a meeting with the boys today. We spoke about individual errors and how we needed to cut those out, and it was a positive meeting. There were plenty of positives from our first-half performance, but unfortunately, as we said to the boys today, the better teams can punish you. We switched off, had a frantic ten minutes and the game went away from us. They guys were disappointed with that after the level of our first-half showing.

It must be difficult with those unforced errors because you can’t train that into players in some way. How do you address that with them?

It’s concentration, it’s discipline, and it’s game awareness. We don’t track a runner for the second goal and as I say, when you allow players with the quality of Dembele to come inside and get a run at goal, they’re going to punish you. That defensive awareness, spotting those runs a bit quicker and that defensive nous to make sure we’re more solid out of possession.

Because you’ve got quite a young group, does that change the way you approach that with those players?

We are a young group and you need to cajole these guys. You need to teach them, tell them what they should have done, show them, and that’s important. You need to show them the mistakes. We went through all the goals, but we usually do anyway. However, they were disappointing goals to concede, so we analysed them all; told them what we thought and how they could have done better, and hopefully, they’ve taken it on board. It’s a learning process for these guys.

Looking back to last Saturday to that fantastic result against Charlton, showing the very best of what you can do. What do you take into that game against Bristol Rovers now? Do you talk about the game at Charlton and the positives of that instead of the negatives from Tuesday? 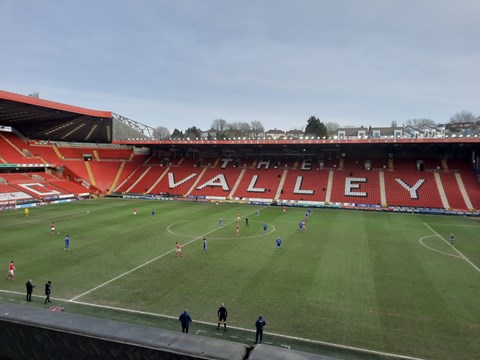 Bristol Rovers are managerless and that can make them a strange side to face. How does that change your approach to the game? Does it throw your scouting out the window?

It doesn’t go out of the window because you’ve got to do your work. You’ve got to look at how they’ve shaped up, and obviously, Tommy [Widdrington] took them on Tuesday against Portsmouth and that means we can have a look at some of the things that they did. You still have to do your work and your analysis. We’ve watched the game through on Wednesday against Portsmouth and we’ve watched it again as a staff today. We have highlighted areas we can exploit and some areas we need to be wary of. We’ve done our homework, and we know what Tommy is going to do. There won’t be too many changes after a brilliant result against Portsmouth.

We know Bristol Rovers are a well-backed club financially. Obviously, Max Ehmer and Brandon Hanlan are players you would have loved to have kept hold of in the summer. There’s obviously strength in that squad?

There’s some real strength in that squad. It’s a real eye-opener the sort of contracts they could put on the table for Max [Ehmer] and Brandon [Hanlan]. We couldn’t compete. We were desperate to keep them and they were fantastic for us. Two great lads, great players and we would have loved to have kept them. However, we were blown out the water by the fantastic financial packages Bristol Rovers put out for them. Tommy’s shown that the side he put out on the pitch on Tuesday could certainly put in a performance as they did against a strong Portsmouth team. We’re very wary of the qualities that they’ve got, but I’m sure they’ll be wary of what we can do to them. We had a good victory at their place earlier in the season, so it’s game on.

Considering you’re playing Bristol Rovers on Saturday and AFC Wimbledon next Tuesday, does that change your targets in terms of points for those games?

No, we’re just trying to accumulate as many points as possible. We want six out of those next two games, and that’s the target. That was the target for Charlton and Peterborough. We’re aiming it at one game at a time. We can only concentrate on Bristol Rovers, and if we can get three points in the bag, we will turn our attentions to AFC Wimbledon. The games are coming thick and fast at the moment. It’s Saturday-Tuesday from now until the end of the season. Games are coming every three of four days now, and we’re getting used to that.

I know you’re carrying a couple of knocks coming into the game. What’s the fitness looking like of the squad at the moment?

We’ve got a few little niggles and knocks and that’s to be expected after a midweek game. The boys have done a little bit of work ready for the game at the weekend, and we’ll have another look in the morning before we reassess and select a team ready for training. Hopefully, we’ll all come through, but it’s a bit of a wait and see to see how they are in training tomorrow.

About Stuart O’Keefe on that basis. After having such a long absence then coming back to first-team action and his first start. Was a rest on Tuesday something you thought you would have to do, or did Callum Slattery come back raring and fit to go?

It was a little bit of both. Stuart [O’Keefe] came in and did a great job for us at Charlton, but we always felt that two games in a short space of time after being out for so long, and although Stuart’s a fit lad, obviously he’s going to be lacking that match sharpness. So two games in a short space of time would have been too much for him, and also, we had the encouragement of having Callum available as well which made the decision a lot easier. Stuart could have played, we just fell on the side of caution with him.

We know over the last couple of weeks Steve [Evans] has been talking about bringing in free agents and having a look at who’s free on the market. Is there any more on that?

There was one we thought we might have a real chance with. We got quite far down the road, but as the gaffer touched on, that didn’t materialise, unfortunately. He was waiting for another offer from elsewhere, and you can only wait so long. If these guys are not keen to come and desperate to play football, you get to a point where you say “we’ll look elsewhere.” We are pleased with what we’ve got. We’re short on numbers, but we know what we’ve got to work with and we’re happy to work with the guys we’ve got at the moment. If something pops up that nobody expected, then we will have a look at it. I think we’ll go with what we’ve got.

Seeing how John Akinde has played over the last couple of games, it looks like he’s in really good form. Is that a fair assessment of him? Is he giving you something extra at the moment?

We’re pleased with John at the moment, but he’s always had it in the locker. We’ve been delighted with him for the last two or three games. Hence why he’s started, and that’s the thing John needs to do, to ensure he’s in the team for a lot more games.