Luke Jephcott netted for Argyle in the first half, and despite the visitors dominating proceedings in the second period, Gills were unable to force an equalizer as Plymouth held on for a 1-0 victory. 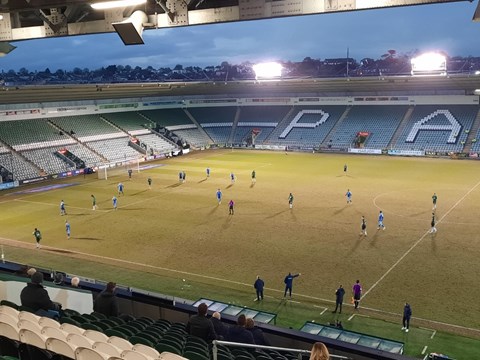 Speaking after the game Steve said: "Without a shadow of a doubt, the best team lost. We were the better side until they scored, they were then the better team until half-time.

"I thought we started the game really well; we were on the front foot and winning the 50/50's. Their goal was a good finish but you can't mark space.

"In the second half I don't know how many times we have put balls into the box, how many patterns of good play, but we never made the keeper work enough for sure.

"I was really pleased with the second half, we were outstanding. If there were fans they would have been applauded off because they gave everything. We have run over the top of them; they had no answer, which gives us confidence moving forwards. We played some great stuff.

"We deserved to win the game, never mind get a point. We move on; we are pleased with this performance but gutted with the result. It was total domination in the second half, but you need to score a goal.

"This [Plymouth] is a great club, we wish them well but our job is to concentrate on ourselves.

"We are not getting a lot of luck."

Jordan Graham started the game having recovered from injury and caused Plymouth constant problems, and the manager said when he is producing such fine performances, goals need to come from the chances made.

He added: "When Jordan Graham is in that type of form you need your strikers to be on the end of them [crosses]. In the second half he must have put 15 stand up crosses into the box.

"He was magnificent; he forced Ryan [Lowe] to take their left-back off."