As you may recall we have recently been supporting close friend and fan of the club, Kimberley Cogger, as she prepared for her charity challenge.

Kimberley recently completed her cycling challenge, which was undertaken to raise money for Gillingham Football Club's charity partner, Take Heart Mercy Mission. She cycled from Land's End to John O'Groats in the space of nine days.

Below, Kimberley reviews her journey day-by-day.

A beginning of a tough challenge all started with ‘Let’s Get Ready to Rumble’ at 5.30am! It’s not something I can see myself doing, but it is one way of getting 800 or so campers up and moving.

I spent much of the ride today with Andy and Aaron, two cycling friends. We encountered a lot of ups and downs on the first day - Cornwall has a LOT of rolling hills.

One poor chap came off and fractured his elbow less than two miles into the ride, a stark reminder that anything can happen and that we have a long way to go before John O' Groats.

Throughout the day we saw stunning coastline views at St. Michael’s Mount before skirting Bodmin Moor and Dartmoor, and hitting the short, steep climbs and descents that Devon and Cornwall are so famous for.

At one point I was riding alongside a man called Paul, from Teston nr Maidstone, who had just ridden from John O'Groats to Lands End and was joining us to ride all the way back again - total legend! 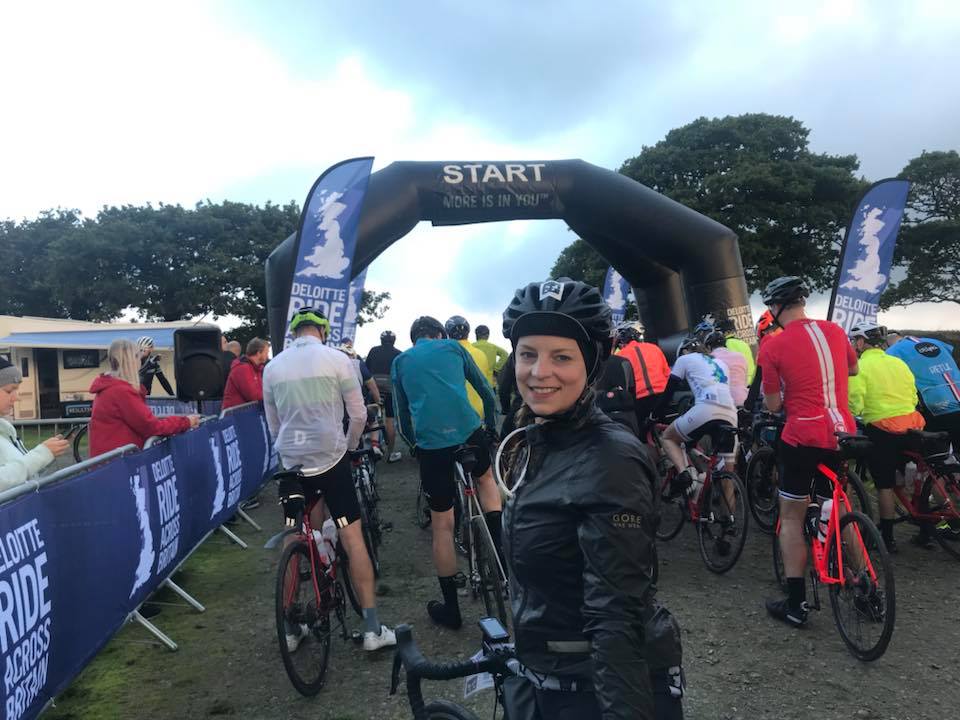 This morning’s wake up song of choice was ‘ Let me Entertain You’,  I wasn’t entertained, I was tired!

I rode for most of the day on my own, making new friends along the way.  The hills kept on coming, including Cheddar Gorge and the Quantocks.

Thankfully they also include lots of downhills which are a particular favourite of mine which was noted by a few of the chaperones who I may have nicknamed me ‘The Descender’.

It was a gloriously sunny and a hard day of riding which was rewarded by staying in Halls at Bath University. My best friend Dawn made the journey to Bath to come and surprise me, and gave me a much needed morale boost.

By the end of day two I was feeling absolutely shattered, tough doesn’t even begin to cover it! 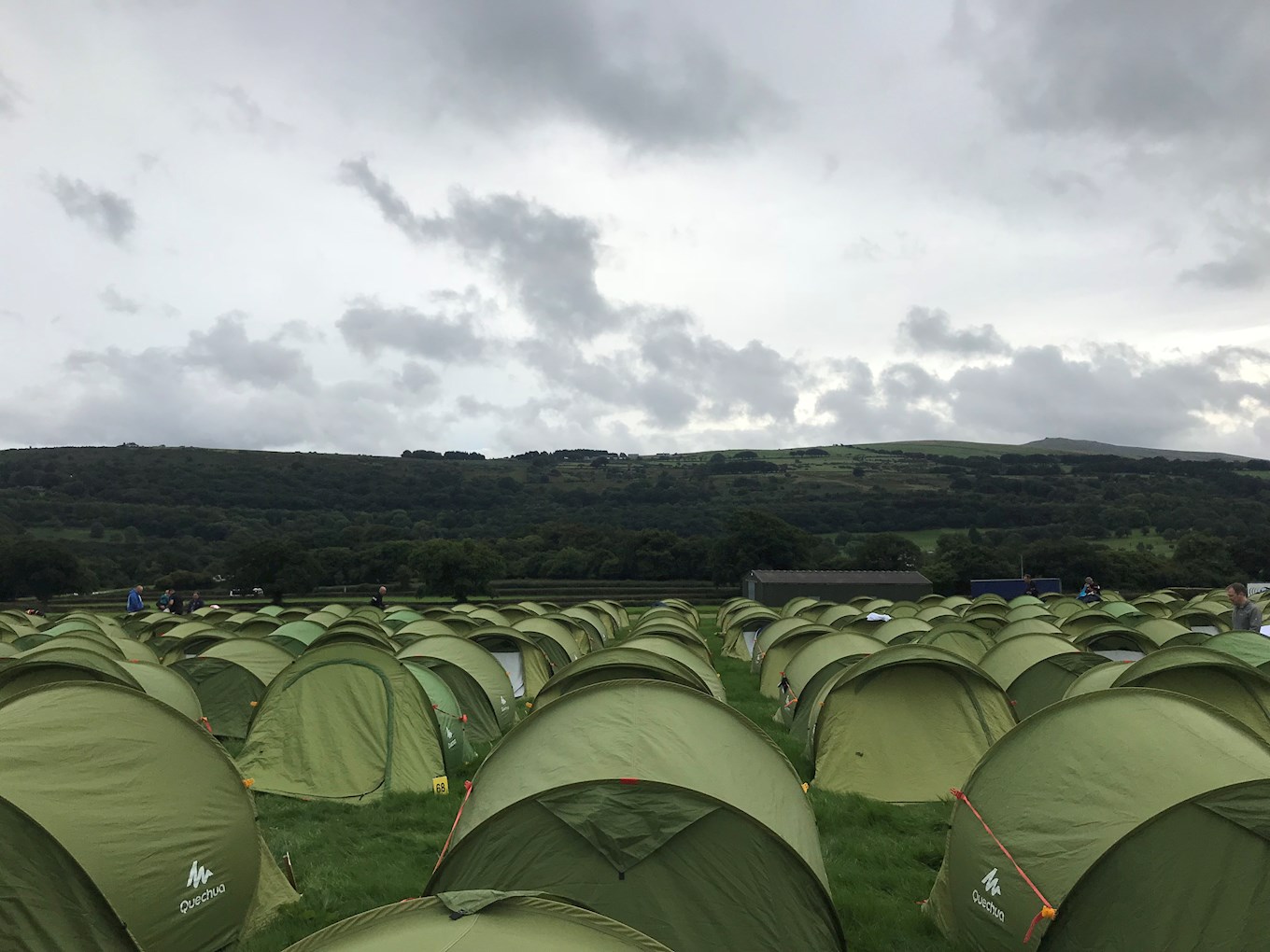 Today began with an amazing decent out of Bath, with two pro cyclists from Team Dimension Data also joining us for the ride.

They passed by whilst I was climbing a hill, struggling to breath, and they were checking their phones – this was way too easy for them!  Needless to say I didn’t see them again!

Stunning route over the Severn Bridge and along the Wye Valley. Still lots of hills though.  I find that I’m eating like an absolute animal.  Basecamp is Ludlow Racecourse where I get to have a much needed massage as my legs are beginning to feel very unhappy!

I missed the wakeup call this morning, as I overslept, the sleep deprivation is severe.  I woke with seriously puffy eyes and face.

Thankfully it was a relatively flat day, setting off with the sun rising over the hills, we crossed the edge of the Stiperstones Hills before hitting the Shropshire and Cheshire plains, which made coping with the then lashing rain and mud that much easier!

We arrived at Haydock Racecourse after another long, tiring day, to find two light aircraft in our campsite - there had been a slight incident the previous day, right where out showers should’ve been situated! 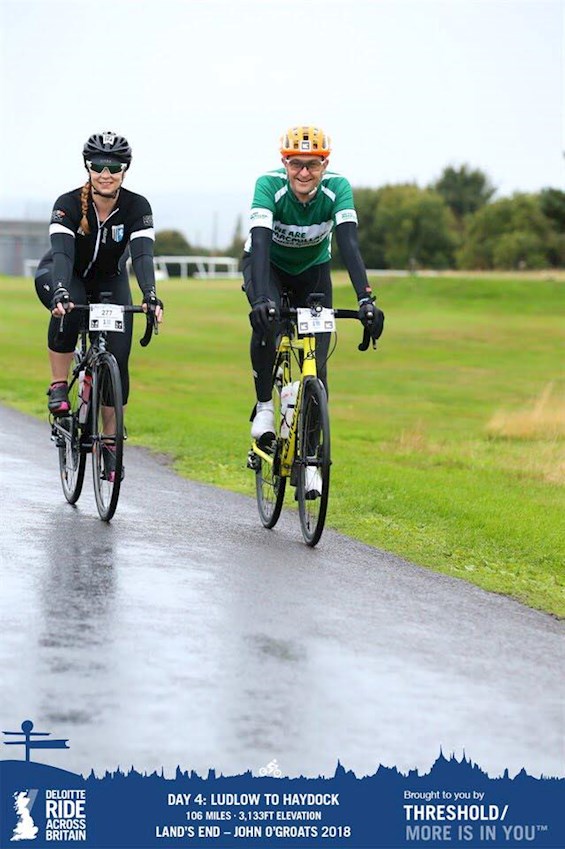 This morning we woke up to the sounds of The Proclaimers belting out ‘I will walk 500 miles’.  This made me chuckle to think I had to ride another 500 miles!  However, emotionally I was totally broken and spent the first 10 miles of the ride crying. Everything hurt.

However, the day brightened up as the route took us out towards the Lake District and to the much anticipated eight mile climb of Shap Fell.

The descent was as fun as I thought it would be, there seemed to be just as many ups as downs!  It was here that I took my one and only ‘nature wee’ in which two sheep walked up to me and just stared at me whilst I went about my business!

At one point of the day I was riding alongside, and chatted with, former Charlton goalkeeper Bob Boulder.  Massage was essential at the end of this day; I could barely move my legs and my glutes refused to work! 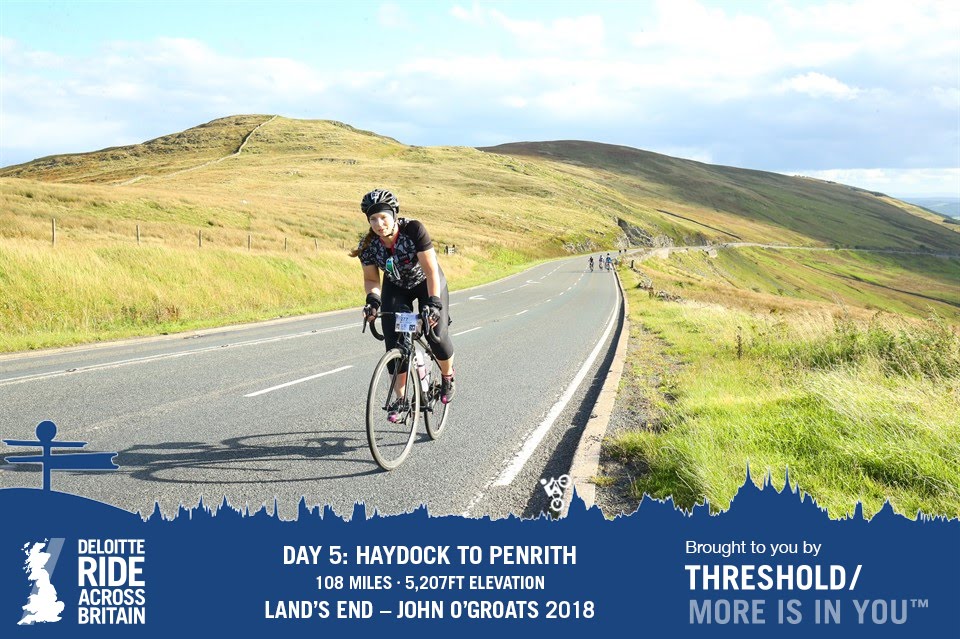 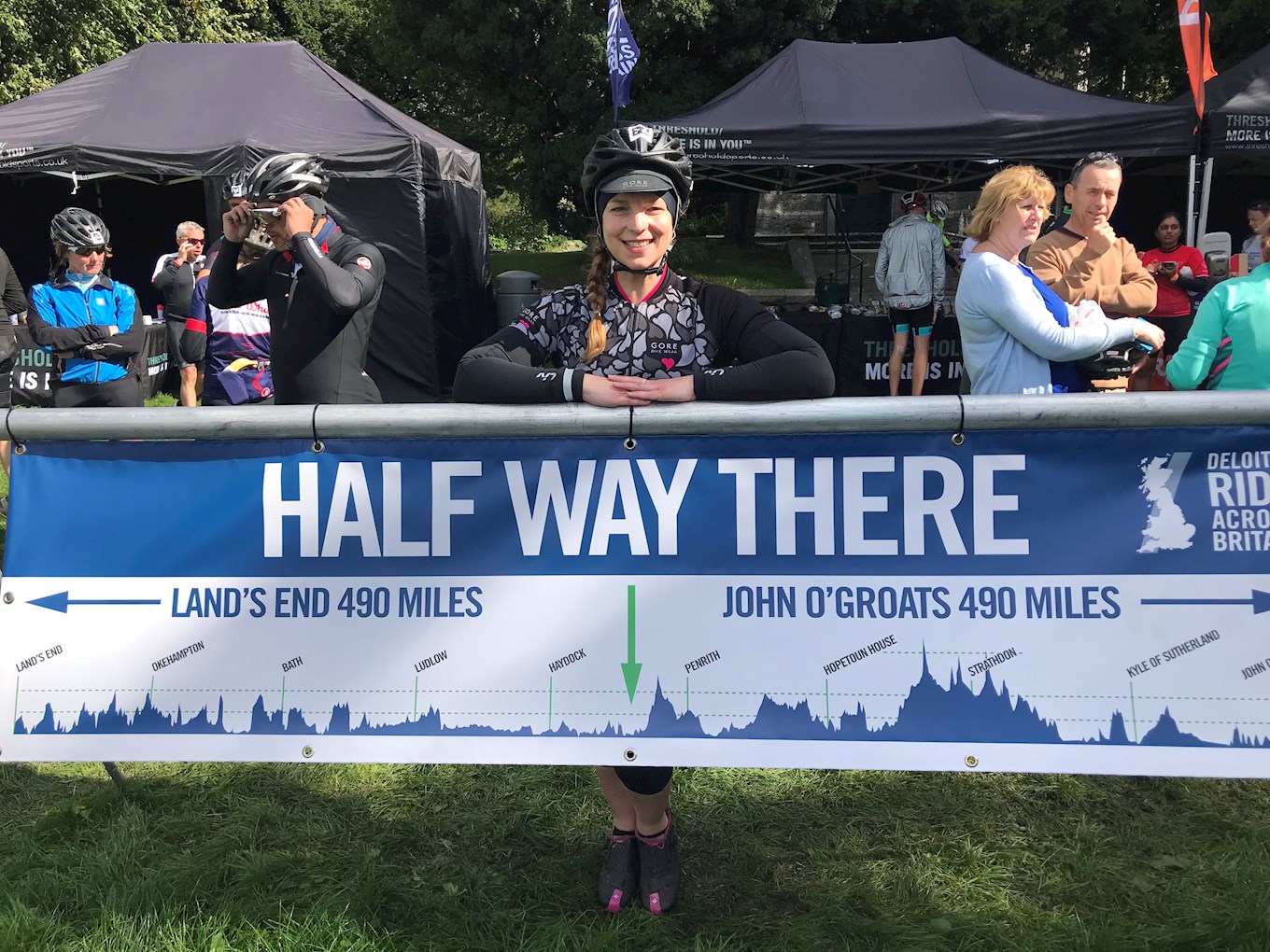 Ride of the Valkyries!!  Certainly was, the weather was wet, unbelievably cold, windy and the road surface was so bad in places, but still I made it to Scotland! Unfortunately, that was only 18 or so miles in and we had another 96 to ride!

We experienced fantastic and beautiful views (and descents) of the Lowther Hills, The River Clyde and the iconic Forth Railway Bridge. 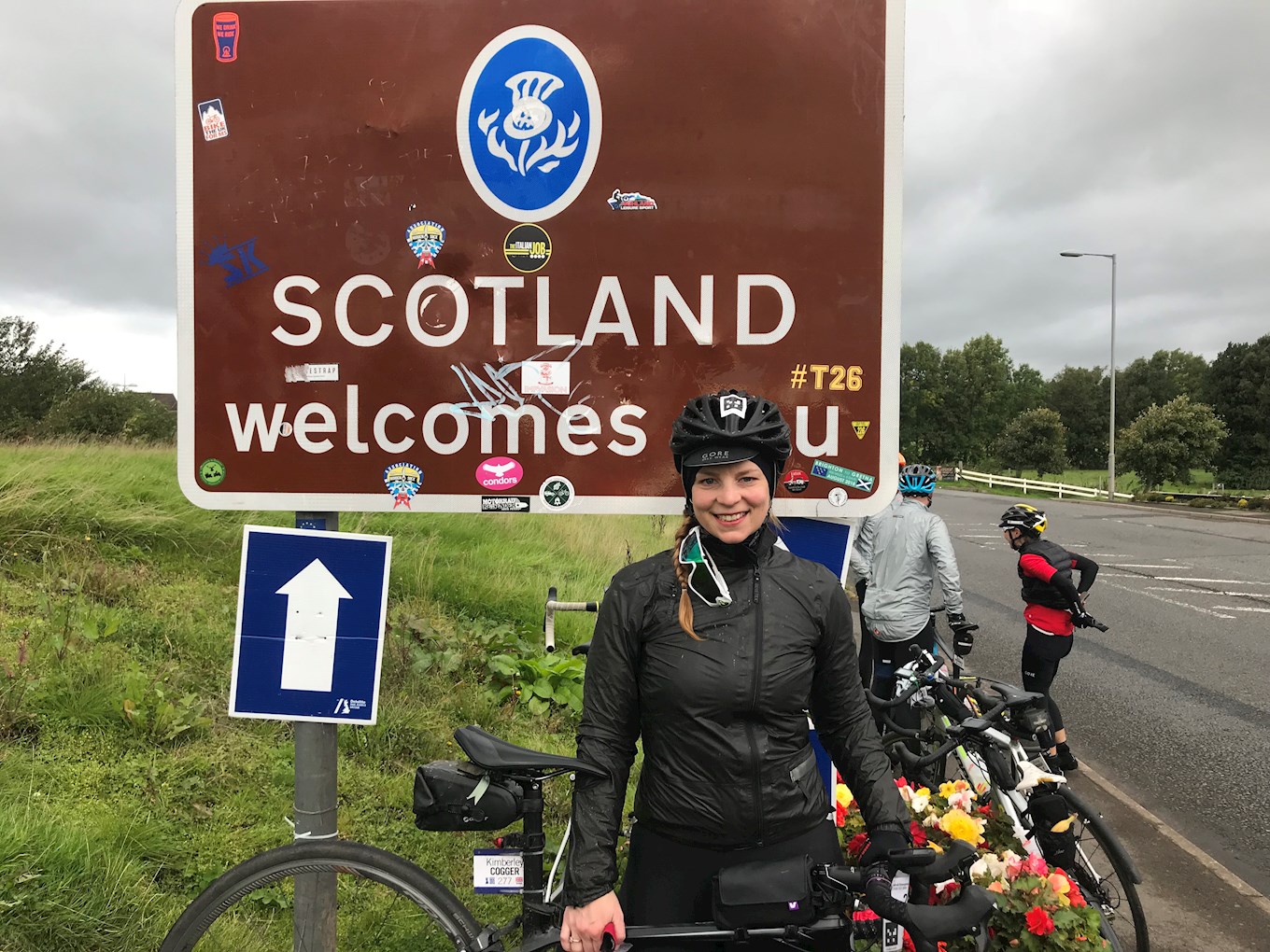 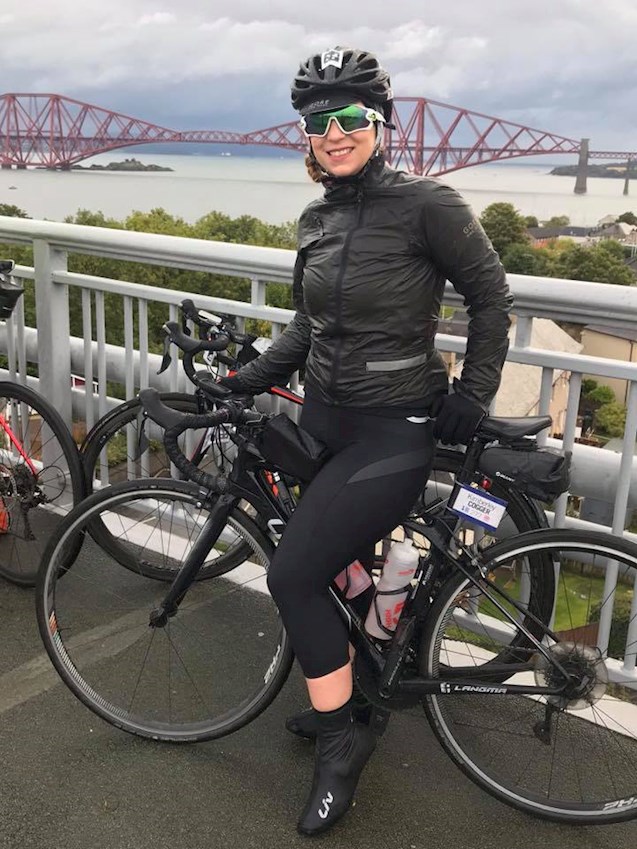 Day seven saw us heading towards the mighty climb for Glenshee.  Yes, the Glenshee of ski resort fame!  It was an incredible feeling reaching the top (10 minutes before the pitstop cut off time).

I’d been looking forward to the descent for a while and it did not disappoint.  The road was clear of cars and fellow riders in front of me and behind me, the sun was shining and I rolled down the hill hitting 41mph on the way, I wonder if I’d have hit 50mph had it not been for the almighty head wind!

I couldn’t help but laugh as I got towards the bottom; the sun was shining and I felt overwhelmed by the beauty of the landscape in front of me and the craziness of the epic adventure I was in the midst of.

My parents came and met me in basecamp after my day of riding, bringing me a well-deserved pint of Guinness on my arrival.  Sadly on one of the descents of the day, a friend I’d made on the ride, had a flip on a descent and cracked his collarbone in two places, his ride was over.

A big reminder to not take risks and get to the end, because anything can happen, no matter how experienced you are. 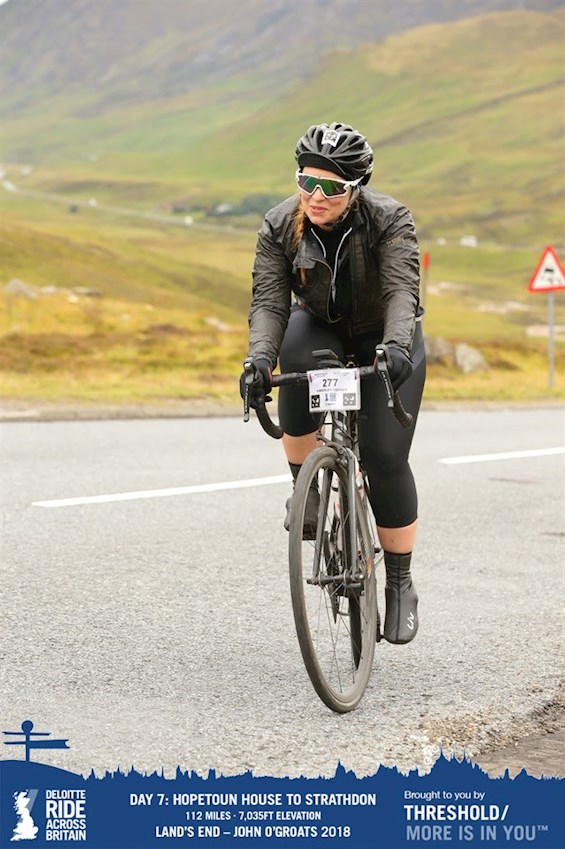 Day 8 –Strathdon to Kyle of Sutherland

‘Wake up it’s a beautiful morning’ played out over the tannoy to wake us up this morning.  OK, the sky looked pretty but damn it was cold, the tents were covered in ice and you couldn’t get warm. I think I started the day wearing five layers!

My thighs were hurting, they’d been spasming during the night, my achilles was in terrible pain so I needed to get that taped up before breakfast.

The first seven miles of the days were spent gently climbing out of Strathdon, the next 2.5 miles were spent climbing the fearsome Lecht which hits an unfriendly 20% gradient in places – it was a weird experience climbing to the top of a hill and being faced with chair lifts because you are in yet another ski resort!.

Brutal after a full English but at least I wasn’t cold anymore.  I can confirm the descent was amazing!  This is one beautiful route through a stunning part of the country.

It’s the ‘Final Countdown’ for our alarm at 5am – even though my alarm went off at 4.30am – I needed to be ready to get taped up. Both ITB’s, both knees and my right achilles needed some attention.

I’m glad my body only started breaking down on day eight.  It was a strange feeling waking up this morning, knowing it would all be over in just seven hours’ time.

After a huge breakfast, we set off at around 6.30am for John O'Groats.  My parents, best friend Dawn, and another friend Stuart were all standing on Bonar Bridge to cheer me on in the morning.

They continued driving past me throughout the day and cheering me on which made the last day all the more special for me, it helped take the pain in my legs away and get the job done.

The day started with a climb up to the two highest points of the stage – Cnoc Staign and Strath Vagastie – before winding through the most gorgeous Strathnaver Valley.

Receiving my medal and a hug from Andy Cook, the route director at Threshold, meant so much.  Although, I still can’t really believe that I did it!  I actually rode from Lands End to John O’Groats, not sure that will ever sink in. 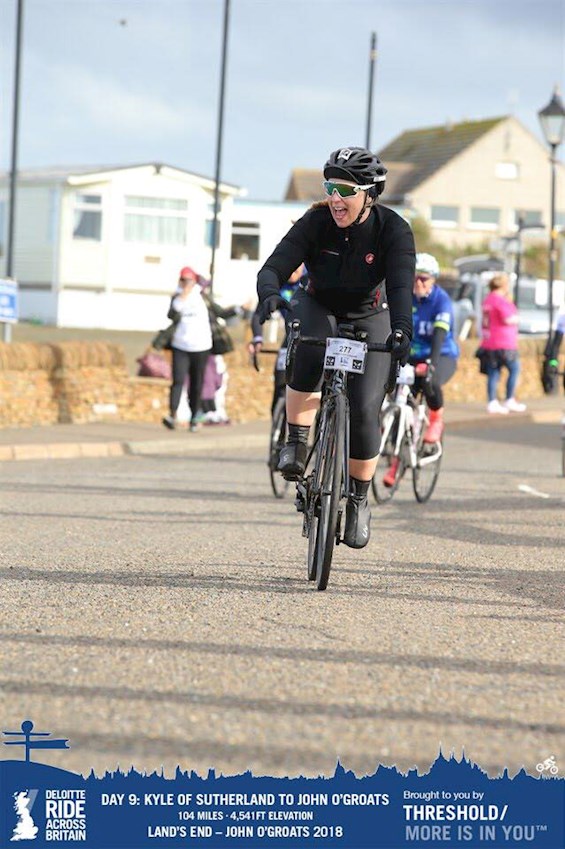 •             Go to tent allocation for a tent number, locate luggage truck and get bag, then eventually find the  correct tent!

•             Blow up the sleeping mat and make tent ‘homely’.  Sort clothing out for the evening and cycling kit for the following day

The organisation was amazing, you couldn’t not want for anything.  Lulu’s catering was incredible; who knew field kitchens could be so good and tasty!

I’ve met some incredible people on this ride, all with their own stories as to why they are there, some very inspirational people. I feel privileged to share this experience with 800 strangers that became a family of 800 friends in a very short space of time.

The community we had in the RAB Bubble is something I doubt I’ll ever experience again.