Gills boss not satisifed with just a point against Fleetwood.

Steve Evans was pleased with the reaction of his Gillingham side after an exquisite Alex Jakubiak strike earned a point at Fleetwood on Saturday in a 1-1 draw.

In wet and windy conditions in the North-West there was little separating the two sides for large periods, but following Paddy Madden’s opener the game looked to be slipping away from the Gills, but there proved to be a twist as Jakubiak stepped up and curled home his sixth goal of the season to earn the Gills a hard fought point.

Reflecting on the game, Evans said: “I think we’ve left two points here. My rationale for that is that firstly we’ve been a big notch down in key areas of the pitch and then secondly you can’t make a mistake like that and not concede a goal with the quality of Fleetwood’s front boys.

“We made changes to get back in the game, we went with almost four up front and we equalised with what was a real great finish from Alex (Jakubiak.) From there on in, there was only a real good block from their central defender to deny Ben Pringle to stop us from winning.

“Our substitutes got us back in the game. I thought they came on with a purpose - I thought Marshy (Mark Marshall) did well and I thought Alex did well with the goal. We are not going to just sit behind the ball and try and steal a goal. Steve Evans teams are known for a lot of late goals, last minute winners and equalisers. I’m going away disappointed.” 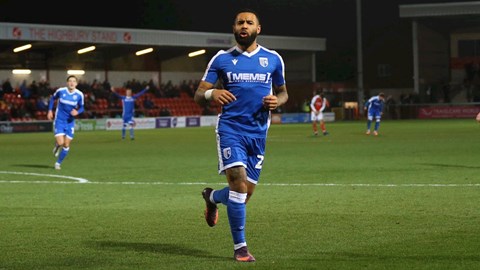 It was a battle at the Highbury Stadium and Evans was praiseworthy of Joey Barton’s Fleetwood side. He said: “It’s a difficult venue to come to. They’ve got someone who will be a top class manager and some good players but I think we’ve been a step down today. We measure it on ourselves - we just weren't at it. But we got a good response.”

Evans, as ever, saved the final word for the travelling Gills fans, who backed the team despite the treacherous weather, the long journey and the timing near Christmas. Thank you to the supporters who made the journey, what with it being such a horrendous day, but they’ve seen a special goal.”