Gills Manager Steve Evans said he could ask no more from his players following Thursday’s 0-0 draw with Ipswich Town at Portman Road.

The visitors bossed proceedings for the majority of the game but Ipswich put bodies on the line and put in key blocks at crucial times to stay in the game.

Max Ehmer, Brandon Hanlan and Mikael Mandron all had efforts thwarted by the promotion chasers, forcing Gills to settle for a point.

Speaking after the game, Evans said: “Our performance was outstanding; we’ve had three great chances in the first half, a couple of good chances in the second half. I cannot fault my players. We were organised, efficient, fresh, we believed in our players and we talk to them every day about what they can achieve. 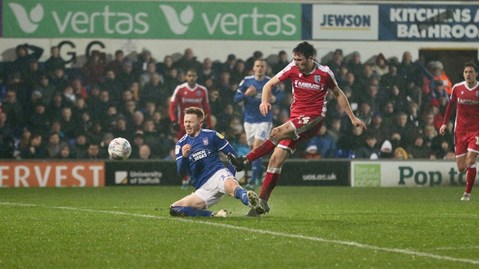 “We were courageous on the ball. Although I’m massively disappointed that we only got a point, by the same token I can only thank my players, and I did, for giving us everything they possibly had and as a Manager you can ask no more.

“You have to come together as a team, be a unit and I thought all over the pitch today we were really bright. We just didn’t get the breaks and I need to ask the referee about two big decisions.

“We had a lot of the ball, we created chances and on another day Brandon has a couple, we’ve hit the post with five to go. We had enough chances to win.”

Gills now contest three home games in the space of nine days with Rochdale, Portsmouth and West Ham set to face MEMS Priestfield Stadium. The Manager said now is all about getting ready for the next game.

He added: “It’s about recovery now and getting ready for Rochdale. Credit to every one of the Gillingham fans that turned up today in horrible weather. They gave us terrific backing; not many supporters will come and watch their team dominate here [Portman Road] for large spells. It was waves of attack at one point.

“We have got a point at the end of it. Had we won we would have jumped two or three places; we need to go again. The spirit inside the camp is unique, it’s fantastic.”

Roberts | "The club is in a great position"


Jordan Roberts pleased to have joined up with Steve Evans at ME7.