On Wednesday afternoon, the Gillingham FC Girls Academy travelled to AFC Sudbury to take on their girls academy team in the first round of the National Leagues Women’s U19 League Cup.

The game followed a strong away win against AFC Bournemouth’s U19 team, with goals from Caitlin Hirst, Lucy Dante and Milly Penfold helping them to victory.

Early on in the game, the two sides were fairly evenly matched as they both sought to take an initial advantage. After withstanding some Sudbury pressure thanks to some impressive defensive work by Sophie Chapman, Gillingham began to take the upper hand with an attempt on goal and a free-kick from Milly Penfold that didn’t fly too far wide of the target in quick succession.

Then, just as the clock ticked past 16 minutes played, Gillingham made the breakthrough they had been searching for. A clever assist from the captain Lucy Dante allowed Olivia Kavanagh to slot past AFC Sudbury Academy’s keeper to open the scoring for the day.

With momentum on their side, the girls won themselves a corner almost immediately after they kicked off again. In what was a perfectly executed training ground routine, it was taken short to Penfold, who swung in a brilliant goal bound cross that Sophie Chapman helped over the line. Two minutes had passed, and the girls had scored two goals.

With a healthy advantage established, Gillingham continued to test Sudbury, with another free-kick on the edge of the box being held by their keeper and Caitlin Hirst shooting just over the bar. However, as the half drew to a close, a goal from Sudbury’s number 11, Paige Clemenson brought them back into the game, and it was only thanks to some phenomenal defensive work from Hannah Tyler to clear a ball off the line that meant Gillingham still maintained their lead heading in to the break. 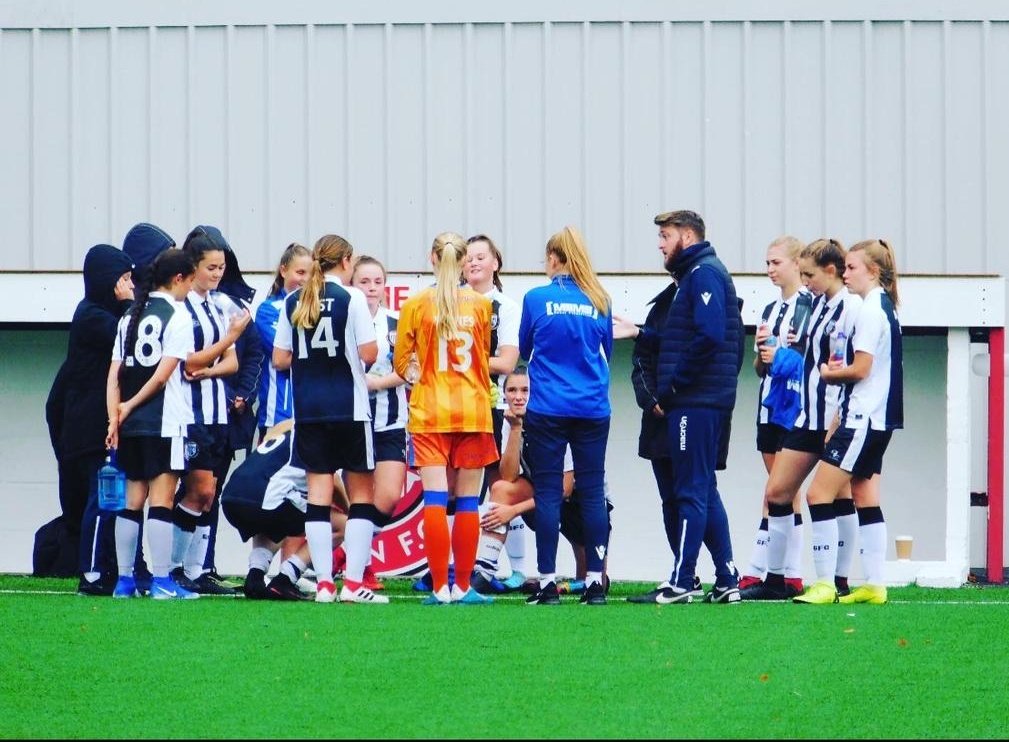 As the second half began, it was the home team who took the initiative. Just five minutes in, a good corner meant that Sudbury were able to level the scores at 2-2, with Gillingham’s early advantage disappearing. Whilst not the start to the half that they would have hoped for, there was still plenty of football to play.

Just before the 60 minute mark, Gillingham made their first substitution. Abigail Wilson, who had put in an impressive shift, made way for Stephanie Adby, who almost scored with her first touch that flew just wide of the goal. This seemed to mark the impetus swinging back in Gillingham’s favour, with a strong spell of possession piling the pressure on AFC Sudbury’s defence. There was clever play between Trinity Barden and Caitlin Hirst down the wing as they sought to grab what they hoped we be the winner, whilst Olivia Kavanagh had been swinging in pinpoint crosses all game long.

Finally, their continued patience and determination paid off, with the substitute Steph Adby showing great composure to create a chance and score what would be the goal to send the team through to the second round of the Women’s U19 National League Cup. After that, Gillingham were able to soak up the spells of Sudbury pressure, whilst also searching for a fourth goal. This nearly came about after what would have been the assist of the season from Penfold was put just wide.

Coach Jamie Raynor named Trinity Barden as player of the match due to her constant trickery and hard work up and down the wing. Of the performance he said:

‘Great battling performance, it was brilliant for us to dig in and show the values that are so important for winning teams. Focus turns to the next game now as the hard work doesn’t stop!’