Gillingham Ladies have made it to the Kent Women’s Cup semi-final after cruising to a 2-0 victory over South East’s Division One side, Kent Football United.

On a breezy and bitter Sunday afternoon at Glenworth Sports Club in Dartford, a brilliant brace from forward Maddie Farrand was enough to send the visitors through to the next round.

With both teams playing in separate divisions, the first quarter of the game was spent finding the weaknesses and adjusting to playing against a new side. Gillingham dominated the early possession, as Kent Football United started the match with a cautious approach.

It came as no surprise that Gillingham had the first chance of the match, as in the 15th minute a dangerous chipped through ball from Daisy Monaghan almost put Maddie Farrand in for a tap-in, but an excellent interception by the Kent Football United defender stopped the forward in her tracks.

Twenty minutes into the first half, Gillingham would really turn on the style - Alice Bussey proved to be a major problem for the host throughout the game. In the 24th minute, after some dangerous trickery by the winger, she was bought down for a free-kick on the edge of the box.

Ellie Jeffkins’ curled effort looked like it was going creep into the corner of the net. However, it landed just over the crossbar to the relief of the home side. 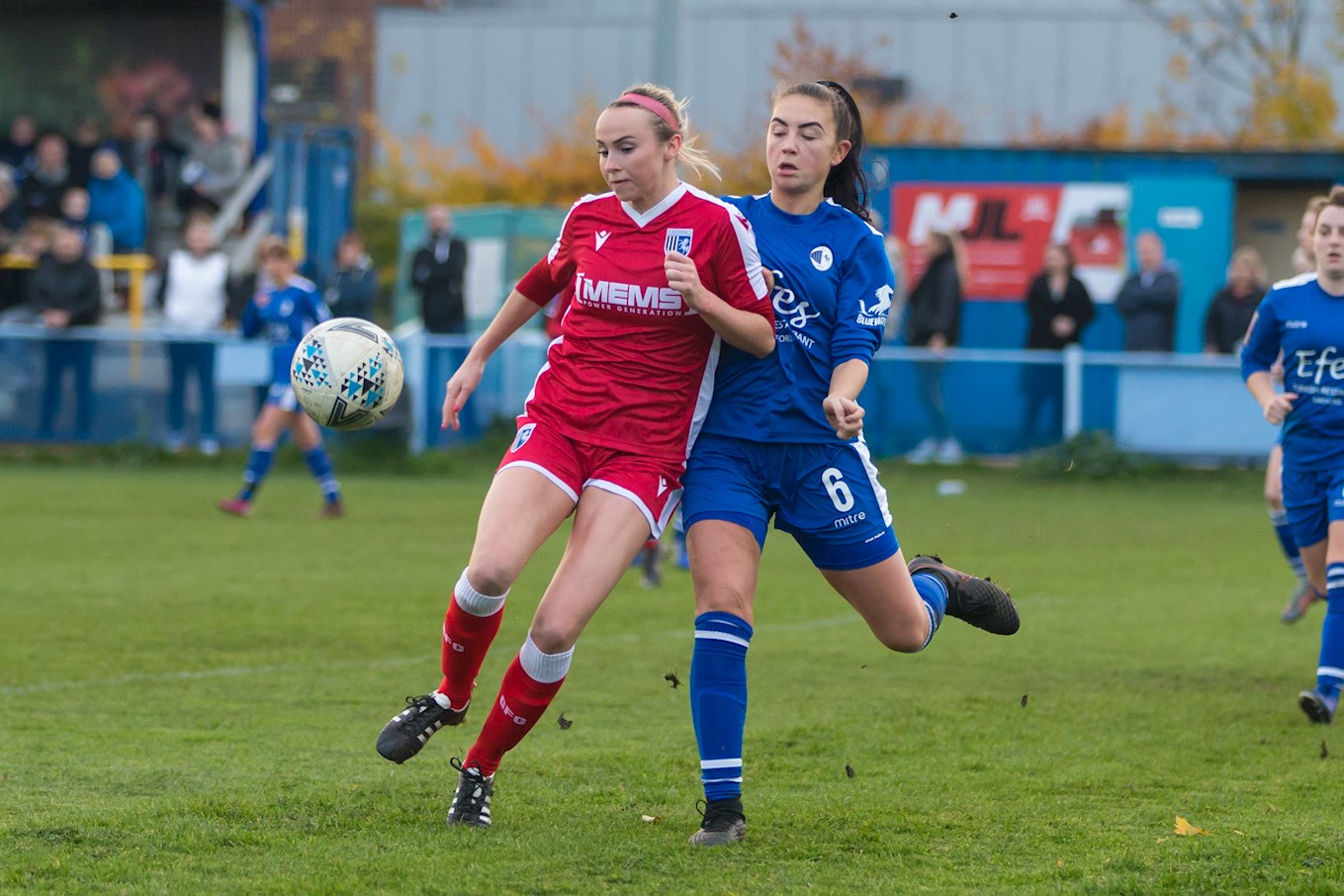 Bussey once again found herself one-on-one with the opposition full-back and was brought down in the 18-yard box, giving the referee no hesitation to award a penalty. Maddie Farrand stepped up and scored her first goal of the game, after placing the ball in the bottom right corner. Gillingham took the lead in the 30th minute. 1-0.

Gills looked to build upon their lead by constantly applying pressure to the Kent Football United defence. This was shown in the 36th minute, following a Gillingham corner which was cleared out, the ball fell to Georgia Paerch who struck the ball with venom towards the bottom corner, but it was well saved by the goalkeeper.

Gillingham continued to attack Kent Football United’s goal and the home side kept their defensive approach, not allowing the away side to stretch their lead as the first half drew a close.

Gillingham seemed to take their foot of the gas at the start of the second half, as Kent Football United dominated the proceedings. Courtney Shanly was finally tested 47 minutes into the match, as she made a great save preventing the hosts from scoring a free-kick from just outside the box.

After constant pressure by the hosts throughout the majority of the second half, it seemed as though they were going to equalize when their striker was through on goal. However, an excellent goal-line clearance from Vicky-Ashton Jones prevented an 88th minute hammer blow for Gillingham.

As time ticked on, Gills were looking to run down the clock by maintaining possession. Luck would be on the away team’s side, as before the referee blew the full-time whistle, Gillingham would double their lead.

A mistake from the Kent Football United Goalkeeper gifted an opportunity for Maddie Farrand to secure her brace, which she did by finessing the ball into the bottom corner; 2-0 with the last kick of the game.

This victory now means Gillingham are closer to retaining the Kent Women’s Cup, as they have progressed to the semi-final. Gills will look to carry this performance into their next league game against Hounslow.