Join us in the Great Hall on Thursday October 24 for our next sportsman's dinner with Razor Ruddock.

Former Liverpool and England centre-back Neil "Razor" Ruddock will be coming to MEMS Priestfield Stadium on Thursday October 24 for the club’s next sportsman’s dinner offering...and spaces are selling fast!

Ruddock, now 51, played over 450 games during his 17-year professional career and made his debut for Millwall in 1986. He went on to feature for Tottenham, Southampton and QPR and represented his country in November 1994 during a friendly fixture against Nigeria under Terry Venables.

He won the League Cup with Liverpool the following year before making his final appearance for Swindon Town in December 2001.

Since retiring Razor has appeared on several television programmes, including Celebrity Masterchef earlier this year.

The former West Ham man will be taking to the stage at Priestfield for a Q & A and to discuss his professional career in full, with Sky Sports presenter Rob McCaffrey conducting proceedings inside our Great Hall, where guests will enjoy the following:

A place will cost £35 per person or £300 for a table of ten. We are expecting places to fill up very quickly so book now to avoid disappointment. Doors open at 7pm. 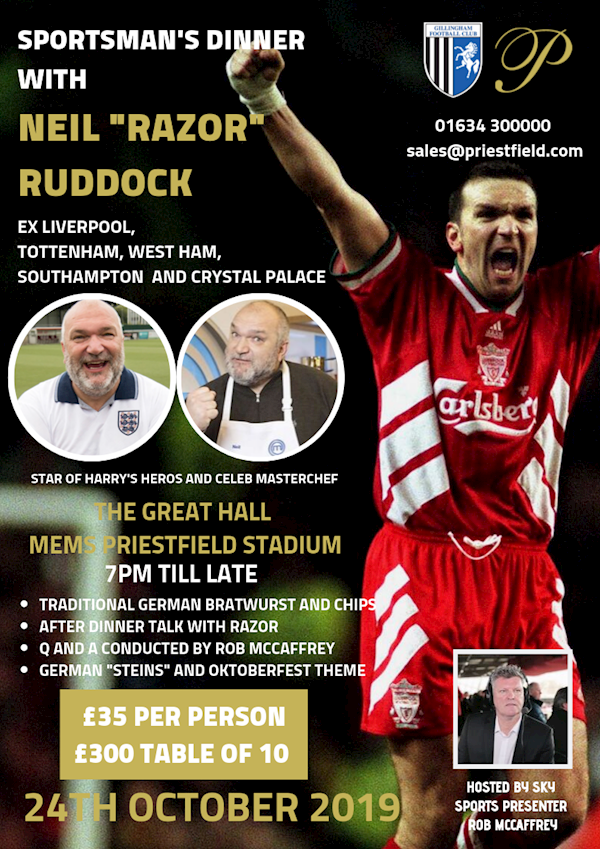