Gills boss Steve Evans said he had a lot to be pleased about following the club’s first pre-season friendly against Colchester United on Saturday.

Goals from Stuart O’Keefe and Connor Ogilvie gave the visitors a 2-0 win at the JobServe Community Stadium, and the Manager was happy with the way his players controlled proceedings. 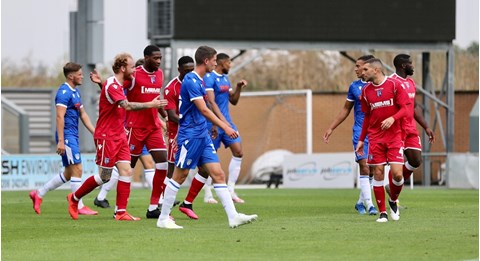 Speaking to the club website after the game he was asked if he got what he wanted from the fixture.

He said: “Yes we did. Some of the players got 45 minutes, or 60. A couple got 90 minutes. It was a good surface and good experience in terms of what COVID is going to be about with no spectators.

“I don’t think we started particularly well; we found it a little bit strange because it’s the first time we have played with no fans. We grew into the game and Stuart got a goal for us to put us in front.

“Jack Bonham made a good save before that to keep it level and we were perhaps unfortunate not to be two or three up at half-time. In the second half we controlled the game, we got the early goal and from there on in it was about who could do the minutes. We made some changes, we’ve come through it and finished with six or seven youngsters which is good.

“It was a good first day in terms of competitive Football.”

The Manager was asked what he looks for most during pre-season games.

He said: “Strangely enough, not performance, because we know what the players can do. There are probably three or four that we are just looking to improve in fitness, like Alex MacDonald, but we knew that.

“Jordan Graham has worked incredibly hard. John Akinde has done a lot of work over the summer and a lot of other players we are looking at the technical side. The back four looked really good.

“Vadaine Oliver had a little knock just before half-time, but he’s fine. We wanted to look at Brandon and I thought young Toby [Bancroft] was terrific when he came on.

“We are pleased the group is working so hard in difficult situations. It was played in a competitive and good spirit.”