Steve Evans has added to his squad with the capture of Vadaine Oliver, and the forward is keen to get going.

Gills new signing Vadaine Oliver said after chatting to manager Steve Evans he said it was a project he “had to be a part of.”

The striker joined the club on Wednesday after turning down a new deal at Northampton, and he’s now raring to get going after hearing some positive words from the club’s management team. 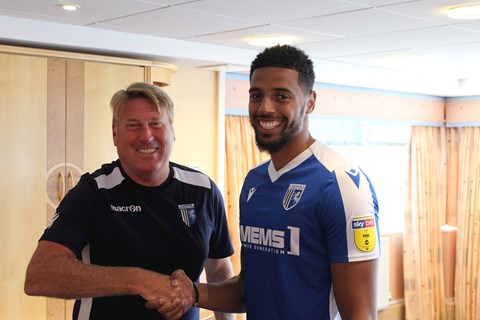 Speaking to the club website he said: “I am buzzing to get it over the line; it’s been a long wait since having the final [play-offs with Northampton] and knowing what was going on.

“I had a few offers from League 1 clubs, but the Gaffer rung my agent and said he wanted a meeting. As soon as I came down, spoke with him and what he wanted to do and what his plans are for the club, it was a no brainer.

“I haven’t worked with them [Steve and Paul] before, but it was about that drive, hunger and looking to build a team which is successful. It was a similar feeling to last year when I spoke to Northampton and the manager there set his sights on promotion, and we achieved that. If I could bottle that feeling I would.

“For this manager to say the same things, that’s what you want as a Footballer – you want to be successful and be in a team looking for that big push. You look what he’s [Steve Evans] done in the past, the players he has worked with and the levels he’s worked at, I felt it was the right decision.”

Vadaine said he leaves Sixfields with a heavy heart, but felt the offer on the table from Gills was too good to turn away.

He added: “Massive praise for Keith Curle, Westy [Colin West – Assistant Manager], Dan [Watson – Goalkeeping Coach], and all the backroom staff. It’s been an unbelievable year; it could have been easy to stay at the club and part of me will be sad because I had such a good year. I will always have a special place in my heart for those fans, and the club.

“The decision was based, for me, on what would put me on that path to get to the next level and that’s what the manager is setting up to do here. I had to be a part of that!

“It’s a new dressing room, which is fine. That’s part and parcel of Football, I don’t know anybody!”

Finally, the striker was asked how he would describe himself as a centre forward.

He said: “I’m a nightmare for defenders; I’m not nice to play against. I’m geared up for the benefit of the team; I’m good in the air, I will run the channels, hold it up and bring others involved. I back myself in the box, anywhere on the pitch against any defender. I think I bring a presence to the squad to help get up the pitch and, in addition, get in the box and get the goals.

“I can’t wait for this challenge.”