Paul Raynor chats to the club website following the 0-0 draw with Cambridge at MEMS Priestfield Stadium.

Gills Assistant Manager Paul Raynor says the focus is on peaking at the right time as the club continues its preparations ahead of the 2020/21 campaign.

The pre-season schedule continued on Tuesday afternoon at MEMS Priestfield Stadium as Gillingham drew 0-0 with Cambridge and, although Raynor said the performance was not the best, he feels everything is heading in the right direction. 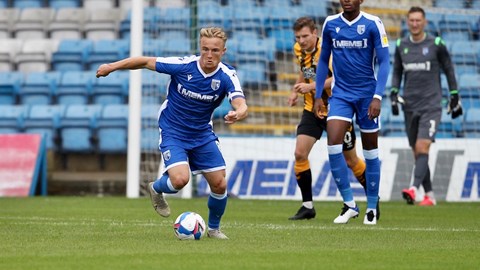 He said: “I don’t think conditions helped. It was obviously very blustery out there; that created a bit of a problem for both teams but it’s another 90 minutes under the belt, more game time for the guys and it’s answered a few questions in terms of looking at one or two things, particularly in the first half, with different shape and different personnel in different areas.

“It’s still a work in progress; there are still a couple of weeks to go before Southend in the cup and we will keep working incredibly hard.

“We have a lot of new faces in the building, just like last year. It takes time to get acclimatised to what we want, we are doing a lot of work in training and the guys had a particularly hard session yesterday so maybe we were a bit leggy at times today, but that’s all part of the process.

“We are packing a lot of sessions into a short space of time trying to get ready for the fifth of September against Southend which is our first competitive game and that’s the focus – peaking at the right time, and hopefully that will be the case.

“We want to win every game; we wanted to win today and at Reading but it’s about peaking for that first competitive game and winning is a good habit. We have one eye on Hull City aswell.

“It’s nice to be back at Priestfield, it’s just a shame there are no fans here – that’s the disappointment because they were brilliant for us last year. They really got behind us and made a massive difference and let’s hope we can get them back in here as soon as possible.”

Matty Willock was back in the mix after missing Saturday’s game at Reading, and the Assistant Manager was pleased to see him get through the game unscathed.

He added: “Matty had a really frustrating season last year – he was disappointed, we were, and we didn’t see a lot of him so it’s good that he’s got a good pre-season under his belt.

“He’s working incredibly hard and it was good to see him get some minutes in the tank out on the field. It’s about getting fit, integrating the new players into how we want them. There’s still a long way to go and there’s still a lot of work to be done.”

As for the rest of the week, Raynor provided an update on what the plans are:

“We will take the boys away for a couple of days,” he said. “The Chairman has been fantastic and has sanctioned a couple of days away; there will be a lot of training sessions, a lot of fitness work and a bit of bonding – getting the guys together – there are a lot of new faces here, we did it last year and it paid off and we thank the Chairman for it.”