A late winner from Callum Reilly ended Gillingham’s 15 game unbeaten run in League One with a 2-1 defeat to AFC Wimbledon at the MEMS Priestfield Stadium on Saturday.

Joe Pigott gave Wimbledon the lead early in the second half, but the Gills though they’d snatched a point through sub Regan Charles-Cook with just minutes to go.

However, as the game entered injury time Reilly fired home from just inside the area to give Wimbledon all three points.

Gillingham manager Steve Evans made one change to the side that picked up a goalless draw with Lincoln City last week. Jordan Roberts dropped out of the side, with John Akinde taking his place in the XI.

Wimbledon had the first effort of the game inside the opening minutes, with Anthony Hartigan trying his luck from a free-kick 25 yards out, but it was well gathered by Jack Bonham in the Gills goal.

At the other end, the home side’s first attack came through Barry Fuller on the right, who crossed for John Akinde at the far post, and he headed wide of the post. Defensively, Gillingham had Max Ehmer to thank for a fine acrobatic clearance on the goal line after Joe Pigott lifted the ball over Jack Bonham.

The Gills had another chance after good work from Stuart O’Keefe on the right, as he drilled a shot into the hands of Joe Day, which Brandon Hanlan was inches from getting on the end of.

In added time at the end of the half, Wimbledon had another good chance as the ex-Gills pair of Luke O’Neill and Scott Wagstaff linked up, with Wagstaff seeing his shot well saved by Bonham.

The Gills made their first change at half-time, with Jordan Graham coming on to replace Olly Lee.

With his first touch, Graham came close to giving the Gills the lead, curling a free-kick up and over the wall, but just wide of the post.

Moments later the visitors were in front. Luke O’Neill crossed for Kwesi Appiah at the far post, and after his header was saved by Bonham, Pigott was on hand to turn the ball home from inside the six-yard box. 0-1.

The Gills soon had an opportunity to level, but Max Ehmer headed Graham’s corner over the bar. It was end-to-end stuff now, with the ball dropping Appiah’s way in the area again, and this time he fired it straight into the hands of Bonham.

Graham was causing all sorts of problems going forward, with his next cross finding Akinde, and his header was turned around the post by Day. With just over half an hour remaining, the Gills made their second change, with Matty Willock coming on to take the place of Alfie Jones. 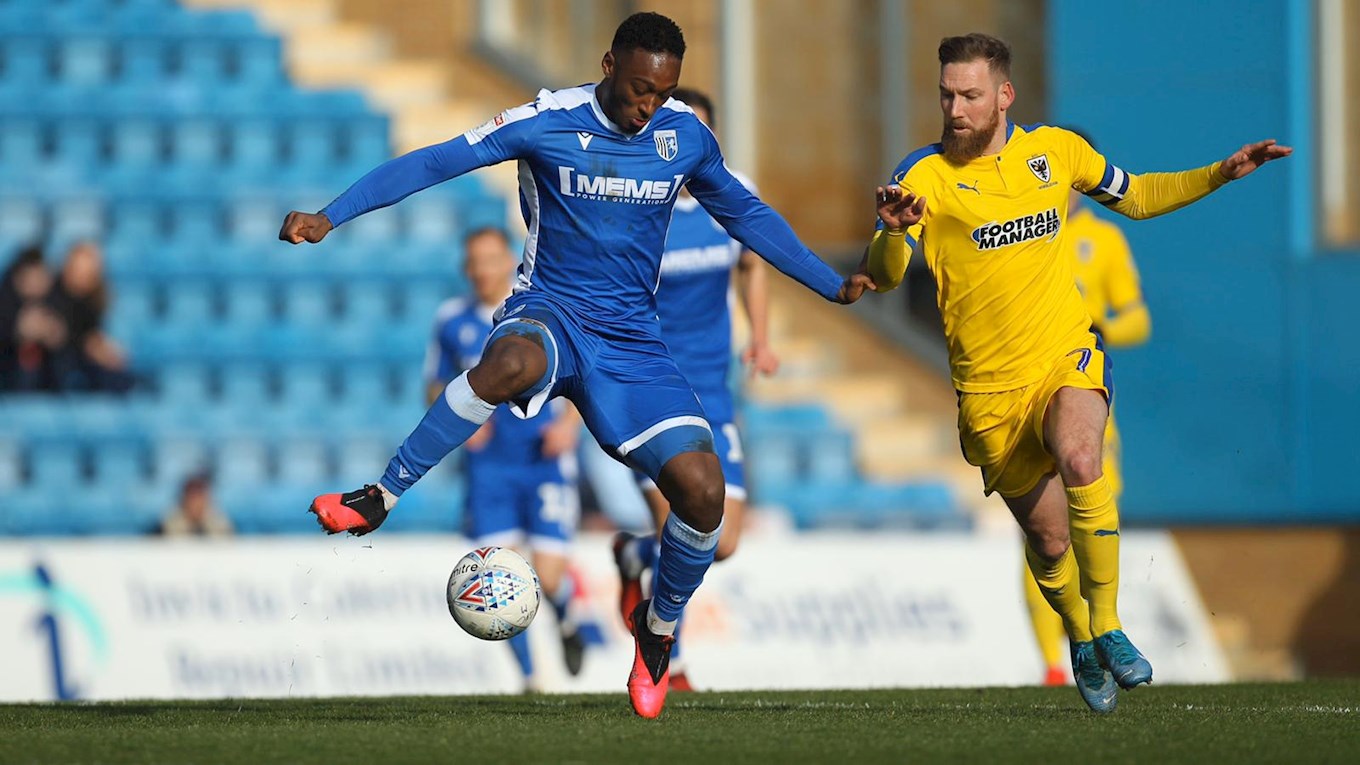 With 19 minutes to go, the Gills made their final change of the afternoon, with Regan Charles-Cook coming on for Tommy O’Connor. Somehow the deficit remained at just one moments later, as Appiah crossed for Pigott, who incredibly managed to volley over from six yards out.

With five minutes to go, the Gills were forced to go down to ten men, with Max Ehmer suffering a shoulder injury.

The Gills leveller did arrive though, with four minutes left. Connor Ogilvie’s long throw was headed goalwards by Hanlan, and after a miraculous save by Day, Charles-Cook headed home. 1-1.

As the game entered injury time, Wimbledon were back in front. Bonham made a brilliant double save from Pigott and Adam Roscrow, before Callum Reilly fired into the bottom corner. 1-2.

Deep into added time, the Gills could have earned a point, with Graham’s deep cross coming to Tucker, whose header was brilliantly saved by Day.