Gillingham forced to settle for a point against Nigel Clough's Burton.

The Gills extended their unbeaten run in Sky Bet League 1 to 11 games on Saturday but were left frustrated following a goalless draw at the Pirelli Stadium.

The visitors had the better of the chances in the first half, with John Akinde not able to convert from Max Ehmer’s cut back.

After the break, Burton were reduced to ten men after Oliver Sarkic was handed a second yellow card, but the visitors were unable to make their man advantage count, although Tommy O’Connor did strike the bar with a late shot from range.

Gillingham manager Steve Evans made two changes to the side that beat Shrewsbury ten days ago. Matty Willock and Tommy O’Connor came into the side with both Alfie Jones and Stuart O’Keefe struggling with injuries. New signing Jordan Graham came onto the bench.

Gillingham had the first chance of the afternoon within 30 seconds as Willock’s deflected shot was turned just wide by Kieran O’Hara in the Burton goal. At the other end, Burton’s first opening came as John Brayford flashed a ball across the six yard box, with somehow no one on hand to turn the ball home.

The Gills had the next chance after 20 minutes, as Ben Pringle’s corner found Jordan Roberts, whose header went just over the crossbar. A few minutes later Roberts cut in from the right and tried his luck from range, seeing his effort deflected just wide.

For Burton, Joe Powell’s free-kick was just too far ahead of Conor Shaughnessy, who was unable to divert his header goalwards. As the half drew to a close, Ben Pringle’s corner eventually ended up at the feet of John Akinde who skewed his shot wide.

Ten minutes into the second half the Gills had the best chance of the game so far. Connor Ogilvie hung a ball up for Akinde at the far post, and his header was clawed away by O’Hara.

For Burton, their first chance of the half came with over an hour on the clock, with Jamie Murphy cutting in from the left hand side before curling a shot into the hands of Jack Bonham.

With 65 minutes on the clock, the Gills made their first change, with Willock coming off to be replaced by debutant Jordan Graham. Moments later Burton were reduced to ten men, with Oliver Sarkic shown a second yellow for a late challenge on Ogilvie.

The Gills continued to pile the pressure on, with Graham’s deep cross landing at the feet of Olly Lee, who fired his volley over. With 15 minutes to go, the Gills made their second change, with Akinde making way for Brandon Hanlan.

With five minutes to go, Olly Lee’s corner was helped over the bar by Max Ehmer at the far post, as the Gills pushed for a winner. 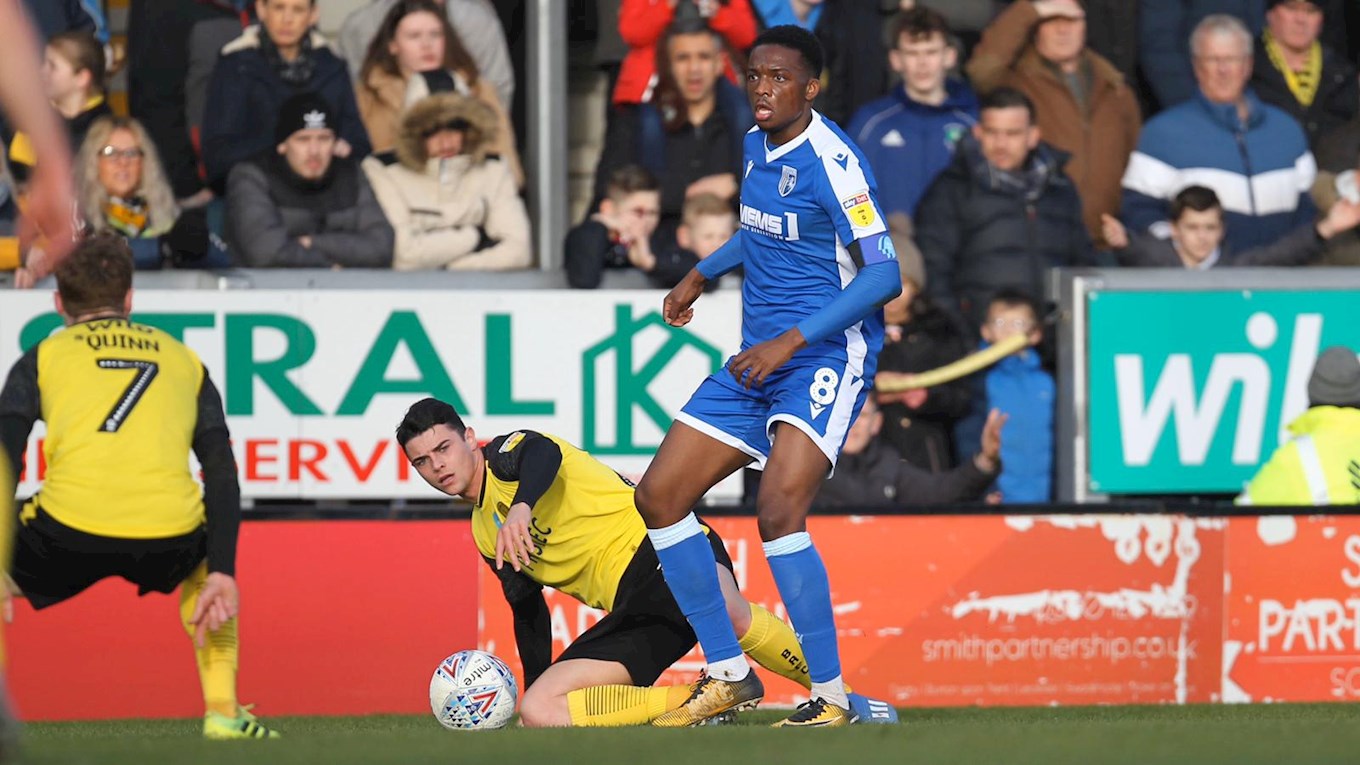 However, it was Burton who had the next chance, with John Brayford getting on the end of Ryan Edwards’ corner, and bringing a save out of Bonham in the Gills goal.

As the game entered injury time, Tommy O’Connor had a dig from range, with his powerful effort cannoning back off the cross bar. A few minutes later, Lee had a go from a similar position, but on this occasion his shot missed the target.