Hosts come from 1-0 down to down Donny at MEMS Priestfield Stadium.

Gillingham made it back-to-back wins with a hard-fought 2-1 victory over Doncaster Rovers at MEMS Priestfield Stadium on Saturday.

The hosts were behind early on after a fine finish from Ben Sheaf gave Rovers the lead, but were down to ten before the break when Feji Okenabirhie was sent off for an elbow on Barry Fuller.

Tommy O’Connor’s corner somehow snuck inside the near post just before half-time, and the Gills comeback was complete with half an hour left when Jordan Roberts’ cross was turned into his own net by Cameron John.

Gillingham manager Steve Evans made one change to the side that picked up all three points against Blackpool in dramatic fashion on Tuesday night. Jordan Graham dropped out of the side, with Stuart O’Keefe taking his place in the starting XI.

Within a minute the Gills had a free-kick on the edge of the Doncaster box after excellent work from Brandon Hanlan, but Tommy O’Connor saw his low drive blocked.

It was Doncaster who took the lead after 12 minutes, as Ben Sheaf picked the ball up 25 yards out and curled a terrific effort beyond Jack Bonham into the far corner. 0-1. 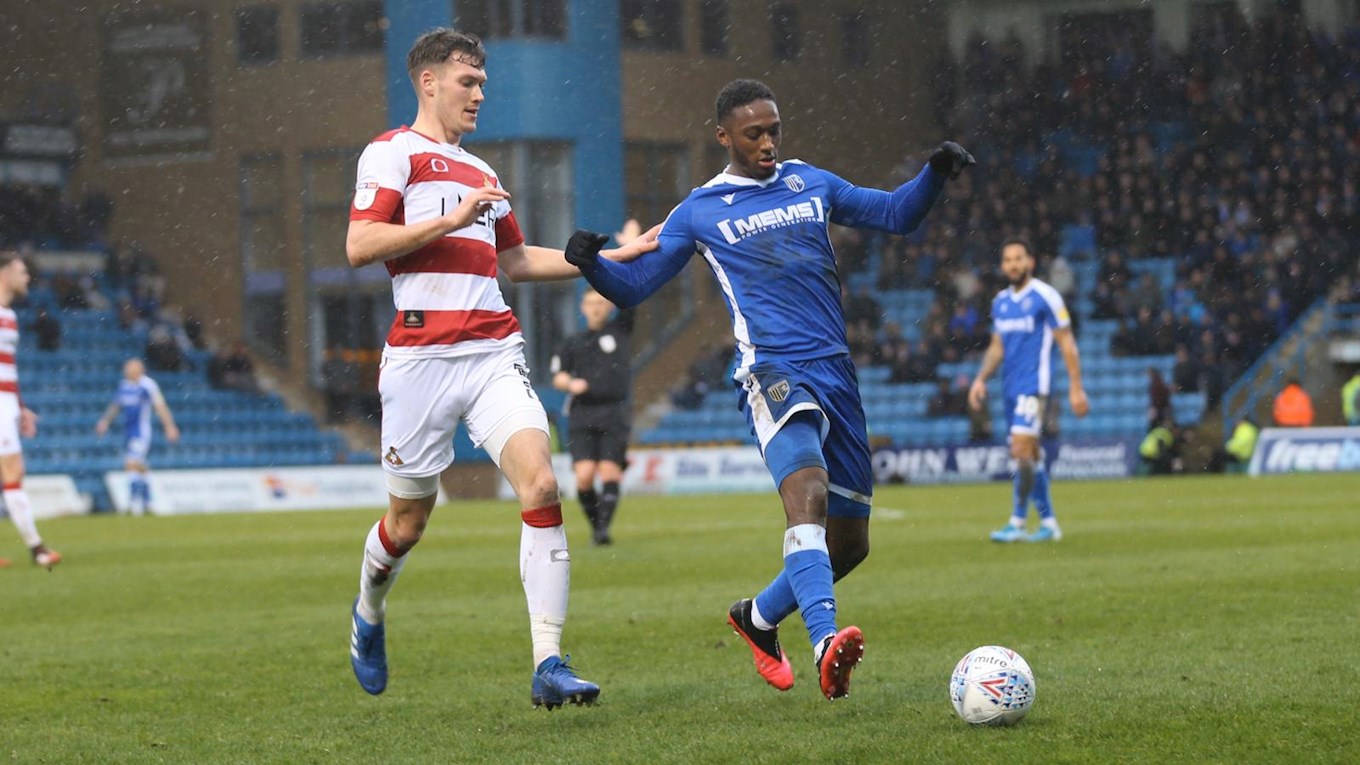 Moments later the Gills were under pressure again, when a deep corner from Ben Whiteman was clawed away from Bonham on the line. Just before the half hour mark, Sheaf tested Bonham again, this time coming in off the left before bringing a save out of the ‘keeper.

With ten minutes left in the first half, the visitors were reduced to ten men as Feji Okenabirhie was given his marching orders for an elbow on Barry Fuller. With seconds to go in the half, the Gills were level in bizarre circumstances, as Tommy O’Connor’s corner somehow found its way in at the near post, with a slight touch off Cameron John. 1-1.

At the other end, Doncaster had another opportunity when Niall Ennis found room on the right, and his cross was just beyond Jacob Ramsey at the far post.

Doncaster had the first chance of the second half, as a delivery from the right dropped to Tom Anderson, who whipped his shot against the foot of the post. At the other end, the ball was set up for Stuart O’Keefe on the edge of the box, and his shot was straight at Seny Dieng.

Moments later, Dieng dropped a Barry Fuller cross to the feet of Jordan Roberts, but he wasn’t able to divert his shot on target. After an hour, the Gills had another opening, when O’Connor’s corner was flicked on by Connor Ogilvie, but it looped over the bar. 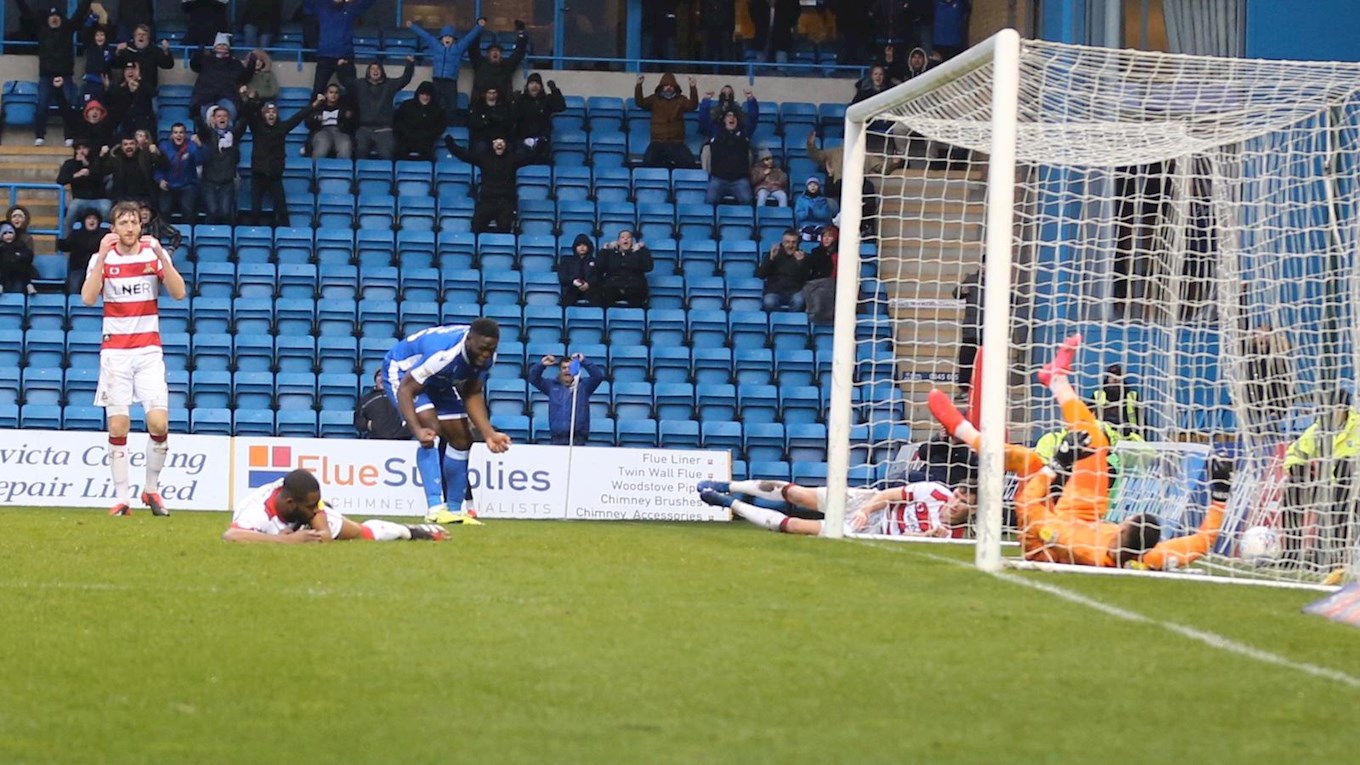 From the next corner, the ball landed at the feet of Max Ehmer, but after turning well, he couldn’t control his shot, and it flew harmlessly over the bar. The Gills then made their first change, as Matty Willock came on to replace O’Keefe.

With 66 minutes on the clock, the Gills completed the turnaround, as Jordan Roberts’ cross was turned home at the far post by Cameron John, for an unfortunate own goal. 2-1.

It was all Gills now, and they could have extended their lead as Willock’s brilliant cross found Akinde, who headed over the bar. With nine minutes to go, the Gills made their second change, with Jordan Graham taking the place of Ben Pringle.

The Gills soon broke, with Roberts finding Graham, whose cross came back to Roberts, and his shot was turned on to the post by Dieng. It was Doncaster’s turn to attack, with the ball eventually coming to Kieran Sadlier, whose shot was blocked.

Midway through added time, Steve Evans made his final change, with Regan Charles-Cook coming on for Jordan Roberts. With a minute to go, Ben Whiteman tried his luck from a free kick 30 yards out, which was turned over by Bonham with Devante Cole also having a great chance, but his header from close range was guided well wide.