Points shared at the LNER Stadium.

Gillingham extended their unbeaten run in League One to 15 games with a goalless draw away at Lincoln City on Saturday.

Gills had chances through Max Ehmer and Brandon Hanlan, while Anthony Scully came closest for the hosts, who had Tayo Edun sent off in the final stages at the LNER Stadium.

Manager Steve Evans made three changes to the side that claimed all three points away at Southend United on Tuesday night. Olly Lee, Stuart O’Keefe and Alfie Jones all came into the side, with Matty Willock, John Akinde and Mikael Mandron dropping down to the bench.

Connor Ogilvie had the game’s first effort after eight minutes, having a go from the corner of the area, but straight into the hands of Lincoln ‘keeper Josh Vickers. At the other end, Neal Eardley whipped a ball across the face of goal, but no Lincoln players were able to get on the end of it.

With 25 minutes played, Lincoln had the best chance of the game so far, as Edun crossed to Scully at the far post, who struck his volley wide. Moments later the Gills had their best chance, with Ogilvie crossing to Max Ehmer, who saw his volley well saved by Vickers.

With five minutes of the half remaining, Eardley took aim from the edge of the area, and stung the hands of Jack Bonham, who claimed at the second attempt. For Gillingham, a long ball dropped to Roberts in the area, only for the forward to slice his shot wide.

The first chance of the second half came the way of Lincoln, with Jorge Grant bursting down the left before finding Scully in room on the far side. His effort was weak though, and rolled gently into the hands of Bonham.

With just over an hour played, a deep free-kick resulted in substitute Harry Anderson heading over from close range. 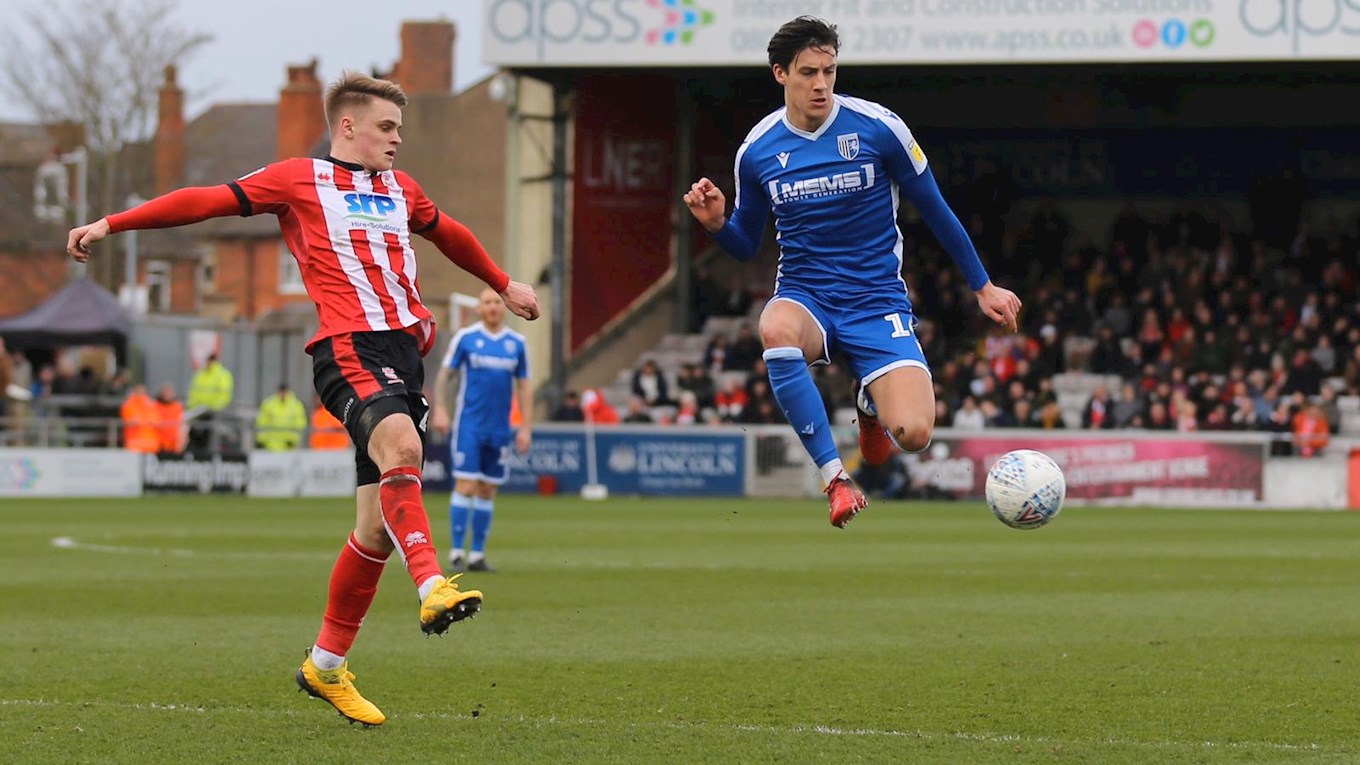 With 63 minutes on the clock, the Gills made their first change, with John Akinde coming on to take the place of Roberts. Akinde was straight into the action, winning a knock down for Olly Lee, who volleyed over from just outside the box.

Moments later, a corner ended with Ehmer setting up Ogilvie, but the defender couldn’t keep his shot down from 18 yards out.

The hosts had another decent chance with a little under 15 minutes to play, with Conor Coventry’s cross finding Anderson, whose header was spectacularly tipped wide by Bonham. The Gills then made their second change, Jordan Graham replacing Stuart O’Keefe.

As the game entered the final ten minutes, the Gills pressed looking for a winner, with Hanlan rising at the near post to help Graham’s corner over the bar. This was followed by the visitor’s final change, with Regan Charles-Cook coming on to replace Lee.

In the final seconds, Lincoln were reduced to ten men, when Tayo Edun was shown a second yellow card for an altercation with Brandon Hanlan.