Gillingham boss Steve Evans says he is “really pleased” that Midfielder Olly Lee decided to extend his stay at Gillingham until the end of the season after extending his loan from Hearts on Friday.

Lee has been a regular in the side since arriving from Scotland in August, making 26 appearances and scoring four times.

The Gills boss was happy to get the deal done, with other clubs having registered an interest. He said:

“I am really pleased because Olly had the opportunity to speak to other interested clubs, in particular two bigger clubs in this division in terms of finance, but Olly had a preference to stay here with us as he has enjoyed the first half of the season.

“He has been exceptional in some games and you don’t have the fans singing sign him up if you are not exceptional and I am pleased to get it done. Thank you to Hearts for letting us to keep him until the end of season.” 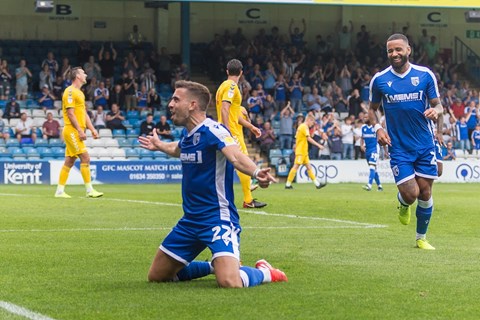 Evans admits that he wasn’t sure that Lee was going to extend when he saw the list of other clubs chasing him and it meant he was worried that he wouldn’t even have the Midfielder for the club's 0-0 draw at Peterborough on Saturday.

“I was down on Thursday because I wasn’t sure this would get done and I wasn’t even sure that we would have him for the trip to Posh but he said to me that he wanted to be here and we love him as staff because he is so professional every day.

“His family are decent people but that isn’t what makes you want to sign him as a manager, what matters is his performances on the pitch and they have been outstanding and I think he is getting even better.”