Gills boss speaks to the media following the 1-1 draw with Oxford at ME7.

Gills boss Steve Evans praised his players for their second half performance against Oxford United, with his team having to come from behind at MEMS Priestfield Stadium on Saturday to secure a 1-1 draw.

Speaking to the press after the game, Evans said: “Oxford were more on the front foot than us in the first half; they looked more dangerous than us without really making a real chance to be fair and it was a piece of wonderful ability that gets the goal.

“We just looked a yard off all over the pitch. I had to wake them up a little bit and we said they had ten minutes to affect the game or we change it. In the second half we were the better team; we got the penalty and got the goal. The fans were tremendous.

“I said at the break let’s be courageous. We got on the ball, we were brave, we got a reaction and I think both teams gave absolutely everything and I think a draw was fair. The boys are disappointed though.

“Afterwards, the second half was everything, apart from the second goal to win it, that we could have asked of our team. They [Oxford] are an excellent benchmark for us.” 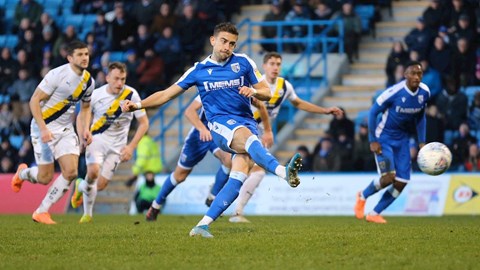 The fixture was a lively one with several aggressive challenges going in from both sides but the Manager felt that was understandable between two strong teams.

He added: “It was competitive and Oxford are an outstanding team. At half-time I was very critical both individually and collectively; we just didn’t do the things that we are good at which are pressing, playing at a high tempo, playing the percentages and picking the right pass and timing it right.

“We now get back on the training ground; it will be a disciplined, hard working week for the players. I thought Rochdale [who Gills play next] were an excellent side who passed it around well, broke the lines and have a good, young manager. We will prepare properly and try to win. The incentive is, if we can take four points from the next six, we will be in the mix.”

Finally, the Manager gave a brief update as to whether fans can expect any further signings before the transfer window closes.

He said: “The Chairman is trying. Last weekend I was almost certain I would have a new player in by Monday; it didn’t happen as the player’s parent club changed the goalposts. We have to live with that but hopefully we will have one or two in this week. We are trying to get stronger and make the right decisions. I’m sure we will strengthen.”