Gills go within three points of the League 1 play-offs following a draw against Portsmouth.

Alex Jakubiak came off the bench to score an 80th minute equaliser as Gillingham started the new year with a point against Portsmouth.

In what was a physical encounter at The MEMS Priestfield Stadium, Jakubiak’s seventh goal of the season cancelled out Gareth Evans’ first half opener as Steve Evans’ side moved to within three points of the play-off places in Sky Bet League One.

Evans once again kept with the same eleven that had been performing so well in December, a month where the Gills won four and drew two of their six games in all competitions.

Shooting towards the Rainham End in the first half the Gills nearly struck an early opener but Olly Lee’s rasping half volley was well saved by Alex Bass. the follow-up effort from Brandon Hanlan went over as the Gills looked to continue where they left off against Rochdale. 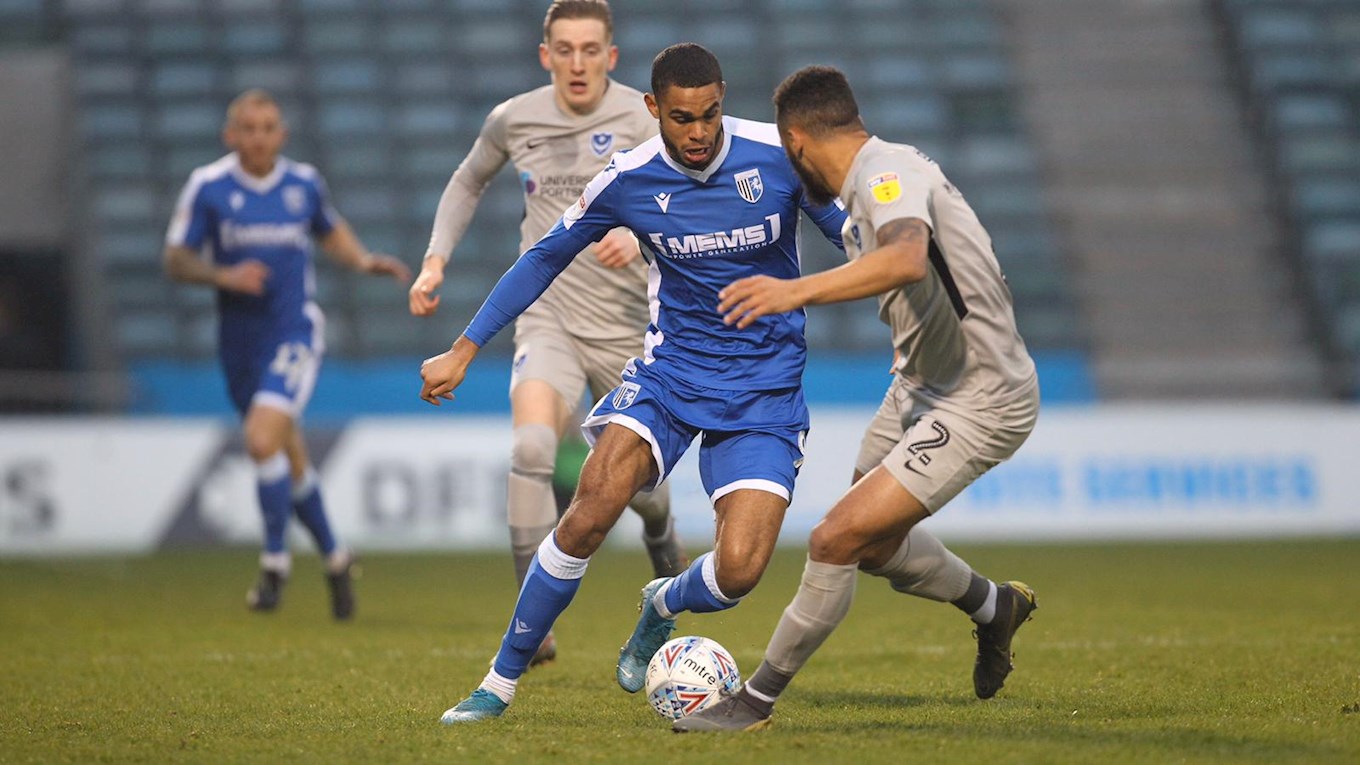 Portsmouth responded well, and nearly took the lead themselves when Tom Naylor was denied by a smart stop from Jack Bonham, the Gills keeper getting down well to deny the Pompey captain before a scramble eventually resulted in Stuart O’Keefe clearing the danger.

The visitors were certainly carrying a threat and Bonham again did well, this time denying Marcus Harness. After the winger’s first shot was saved, Harness tried his luck again but Bonham was a match to the shot across goal.

Portsmouth had started with a real impetus and took the lead in the 35th minute. Harness broke clear down the left wing before cutting the ball back to Gareth Evans, the experienced midfielder had space to fire past Bonham to net his fifth goal of the season. 0-1.

The Gills, not used to being behind at Priestfield, nearly pulled level through O’Keefe just before the interval. The midfielder did well to burst in to the box, but from a tight angle his shot was parried onto the bar and away for a throw in.

Neither side made a change at the break but Steve Evans’ half time message must have made an impact as it was the Gills who came out on the front foot. Both Max Ehmer and Mikael Mandron had shots saved by Bass before Mandron was seemingly dragged down in the box, though some very strong penalty appeals were waved away.

With the game becoming more and more stretched, the Gills started to up the tempo and Hanlan was the next man to try his luck, though his shot was comfortable for Bass. With 20 minutes left on the clock Steve Evans made his first changes as he introduced Mark Marshall and Alex Jakubiak.

It was starting to feel like one of those days for Gills and when Barry Fuller fired a powerful left footed effort towards goal a second Gills goal looked on the cards for the full-back but Bass was again on hand to tip over.

There was to be a sting in the tail though as Alex Jakubiak would again come off the bench to score an important equaliser for Gillingham. After receiving the ball from Tommy O’Connor the forward did well to shoot low under Bass. 1-1.

Both sides threatened a winner as Pompey introduced John Marquis and Ollie Hawkins, but it proved to be in vain as the game finished all square.