Gillingham were held to a goalless draw away at Peterborough United on Saturday despite producing a fine away display, and creating a number of excellent chances.

The Gills were by far the better side in the opening period, hitting the bar twice in quick succession, through new signing Jordan Roberts, and then Brandon Hanlan.

After half-time, Peterborough hit the bar themselves through Mo Eisa, before Mark Beevers was dismissed in the final minutes for two bookable offences.

Gillingham manager Steve Evans made one change to the side that were beaten 2-0 by West Ham last weekend, with new loan signing Jordan Roberts coming into the side to replace Alex Jakubiak.

Despite the Gills making the brighter start, the home side had the first opening of the game, as Louis Reed’s corner set up Mo Eisa, whose shot was well blocked by Alfie Jones. At the other end, the Gills had a chance when Peterborough goalkeeper Christy Pym palmed Olly Lee’s free-kick in the direction of Jack Tucker, but he couldn’t get enough power behind his shot.

Just after 20 minutes, the Gills had another opening, as Barry Fuller crossed towards Roberts, but he couldn’t direct his header towards the target. Just after the half hour mark, the host had the best chance so far, as the ball dropped to Jack Taylor in the box, and he saw his header well saved by Jack Bonham.

They had another go soon after, as George Boyd crossed to Ivan Toney, but this time the header was much more comfortable for Bonham.

With 40 minutes played, the Gills came incredibly close to scoring, not once, but twice. Olly Lee’s free-kick was flicked onto the bar by Roberts, before the ball rebounded to Hanlan, only for him to strike the bar again. Moments later Connor Ogilvie found Hanlan in room on the right, and he drove into the penalty area before bringing a save out of Pym.

It was Hanlan involved again as the half drew to a close, this time heading Lee’s cross wide. O’Keefe came close once more with the final kick of the first period, powerfully striking wide from just outside the box.

The Gills had the better of the play once more in the opening stages of the second half, forcing a series of corners. The most dangerous of which almost curled straight in, with Lee’s delivery parried clear by Pym on the line.

It was Peterborough’s turn to come close just after the hour mark, as Dan Butler crossed for Toney, whose flicked header was brilliantly kept out by Jack Bonham. Reece Brown also tried his luck with a volley from the edge of the box, but his shot ended in the hands of Bonham. 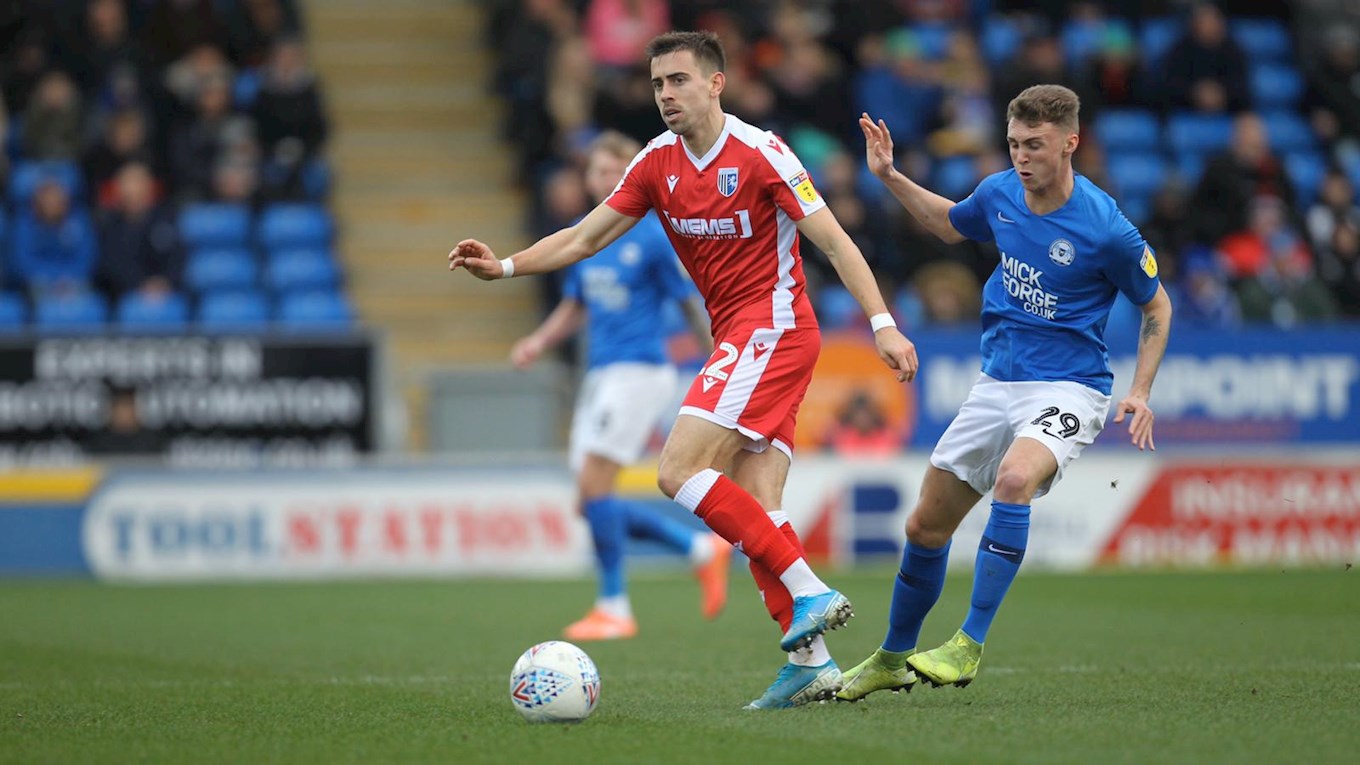 With 76 minutes played, the hosts hit the bar in almost the same spot the Gills did in the first half. Toney’s shot was parried out by Bonham, only as far as Mo Eisa, whose shot was magnificently turned onto the bar by Barry Fuller.

Eisa had another go from the edge of the box moments later, after once again linking up with Toney. This time he hit his shot over the bar.

Wiith 77 minutes on the clock the Gills made their first change, as Alex Jakubiak came on to replace Roberts.

With just a few minutes to go, Peterborough’s Mark Beevers was dismissed, shown a second yellow card for blocking Hanlan out on the right.

In the final minute of added time, the ball came through to Toney, in on goal, but under pressure from Jack Tucker, he dragged his effort wide of the post.