Gills Coach Craig Stone says the club are "in it to win it" following the 5-1 win over Dover in the Kent Senior Cup Quarter-Final at Crabble on Tuesday night.

Regan Charles-Cook (2), Jordan Graham, John Akinde and Toby Bancroft were all on target as the Gills booked a semi-final spot against Whitstable Town at the Belmont.

The visitors had gone a goal down but struck five times in the second half without reply to progress to the final four.

Following the game, Stone said: “Once we put to bed a few issues that we had at half-time we knew we had enough quality and could turn it around. 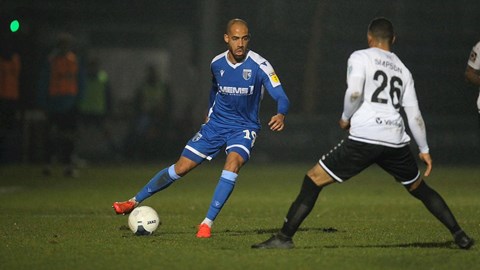 “Regan played really well, worked hard and deserved his goals. He was a real threat in the final third, as was Jordan Graham. You know what they bring; it took a while but we had a young back four and they are learning – they are playing against players regularly playing in the Conference National. It took them 15-20 minutes to get to grips, but after they did that I did feel we were in more control and in the second half, once we had got ourselves together, we moved the ball quicker and it was all about what we could do.

“Matt [Baker] was brilliant, he’s 16 years old. Once the lads got used to the intensity they did well and I was really proud of the young lads who stepped in during what could have been a tricky game, and Toby got a goal too. Tommy did well and came really well in the centre so I’m really pleased."

Stone was quick to emphasise that performing well in these types of games can certainly have their rewards, as Mikael Mandron demonstrated last weekend.

“We said before the game that if you play well in these games you play. Mika Mandron played last week in a friendly and then scored twice at Sunderland; they know the opportunities are there," he added. "And if they play well they will get in the side; it’s about who is playing well and who is giving the most in the games they play.

“We are in the competition to win it, there is no point being in there just make the numbers up. It’s great to win any game; you want to win and you could see that tonight. Players want to score, win, and prove they are better than the player they are up against.

“We will go to Whitstable; we want to win the competition.”