The first football fanzine I ever saw was the February / March edition of the general, as opposed to club-specific, midlands-based ‘Off The Ball’, sold to me whilst I was on the Tottenham members’ train, on the way back from having seen a 3-0 win at Sheffield Wednesday on the last Saturday of February 1988.

The origins of the football fanzine date back to 1972, with the first recognisable example of the genre being ‘Foul’, which had started publication in October of that year and was produced by Cambridge University students, disillusioned with the way the sport was being run.

It lasted for four years until finally folding after being sued for libel. Fast forward to the mid to late Seventies and the fanzines produced tended to be music ones, mainly devoted to punk. It wasn’t until the second half of the eighties that the football fanzine movement took off.

The sport was in decline at the time, attendances were dropping alarmingly (less than 10,000 saw Birmingham’s visit to Tottenham for a top flight fixture in April 1986) and crowd trouble was a major issue. 1985 saw Millwall fans riot at Luton and thirty-nine supporters killed following trouble at the European Cup Final between Juventus and Liverpool.

The condition of the grounds was an issue, with many having been allowed to become run-down. Crumbling terraces, combined with huge perimeter fences to deter fans from getting on to the pitch, made many football stadiums very unpleasant places at which to watch the sport. There was also the Bradford fire in 1985, with the wooden Main Stand at Valley Parade burning down in minutes, during the club’s final home game of the season, against Lincoln City, on an afternoon that should have been a celebratory occasion, with the Yorkshire side having won the Third Division championship. Fifty-six supporters lost their lives that day in the inferno. On the same afternoon, a Birmingham fan died following crowd trouble at his side’s game against Leeds United. 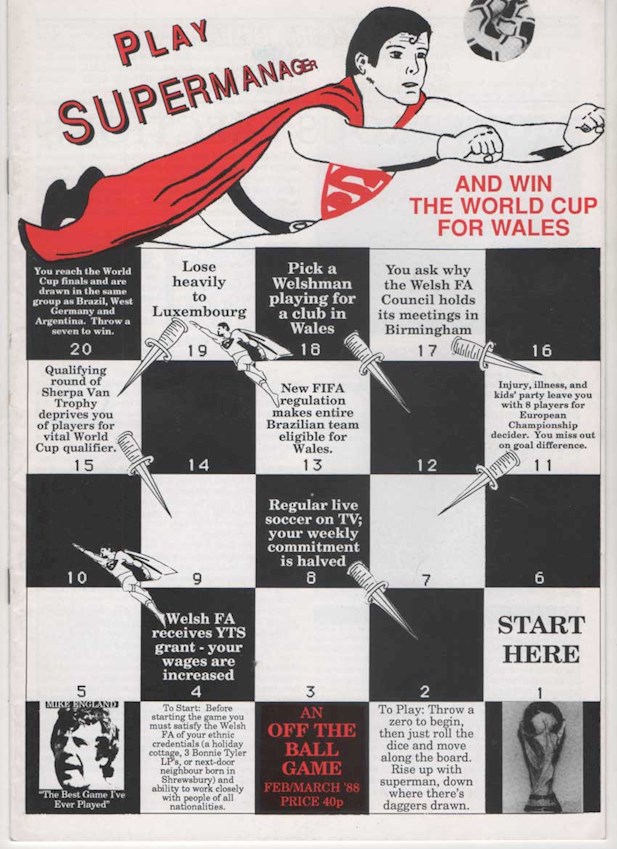 Fanzines gave the supporters the chance to have their say and there was plenty to discuss and debate as the sport lurched from one crisis to another. The general ‘When Saturday Comes’, first issue dated March 1986, and ‘Off The Ball’, which was up to its thirteenth issue by April 1988, were the frontrunners, joined by ‘The Absolute Game’ in Scotland. The issue of ‘Off The Ball’ that I bought in February 1988 included a feature titled ‘Monstrous Erections’, about the perimeter fencing at grounds.

The piece included, ‘But the lessons of the past leave no room for complacency. Common sense and the evidence of previous tragedies tells us that at least one element of modern safety measures – the increasingly prevalent fencing-off of crowds from pitches – actually puts supporters at considerable risk.’ I read the article on the way back from having spent the afternoon standing on the Leppings Lane End at Hillsborough, the same terrace where, just over a year later, 96 Liverpool fans lost their lives at their side’s FA Cup Semi-Final against Nottingham Forest, when overcrowding in the pens had led to fans being crushed against the high perimeter fencing at the front of the terrace.

The same edition listed other individual league club related football fanzines that were available, just over twenty, with three different Arsenal publications. Lower league sides were just as well represented as top outfits, examples being York City’s ‘Terrace Talk’ and ‘The Crooked Spireite’ up at Chesterfield. On the way to Tottenham’s away match at Liverpool in April 1988, I saw and bought my first-ever edition of a club fanzine, issue one of ‘The Spur’, featuring a cover picture of a Spurs player who had had his head replaced with that of Arsenal’s Kenny Sansom, with the headline ‘Perish The Thought’. By the start of the following season, Gillingham Football Club would also have a fanzine, one whose genesis dated back to the previous year...

In 1987 three Gillingham followers chanced upon a small specialist sports bookshop in London’s Charing Cross Road. It was a shop that stocked football fanzines and the intrepid trio flicked through as many as they could and each bought a selection. Antidotes to the glossy-weeklies, Shoot and Match, and the sanitised view of proceedings served up by matchday programmes, the fanzines were a breath of fresh air as they featured the views of the supporters themselves and the Gills followers were keen to start one for their own club. 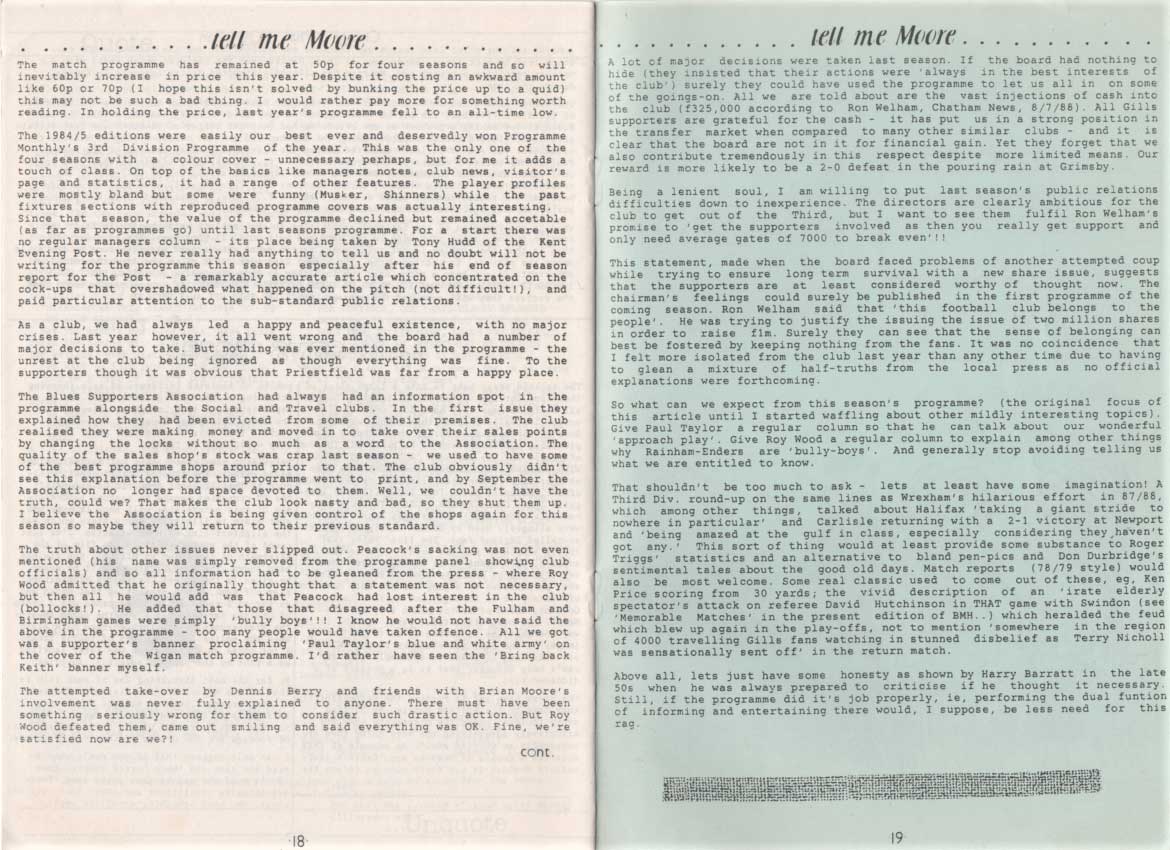 By the summer of 1988, they were ready to proceed. The assembled team consisted of original editor Robin Halls, Ali Mohammed, Chris Read, Eddie Allcorn, Chris Lynham and Simon Baker. By this time, Lynham had already had a two-page feature, ‘Turbulent Priestfield’, penned in the aftermath of Keith Peacock’s sacking as Gillingham manager in December 1987, published in ‘When Saturday Comes’. A cheap printer had been found but articles, which had been written in what was the pre-home computer age, needed to be typed up.

A typist was found, but one lacking in club knowledge, leading to some amusing misinterpretations of players’ names in early editions as the typist struggled to decipher poor handwriting. The money required to pay for the printing was raised through the time-honoured tradition of asking nicely, borrowing and begging, and from advance orders from Sportspages.

The publication, long in planning and execution, was finally conceived in a Rochester pub on a sunny Sunday evening. However, there was the problem of what to call it. It had originally been concocted as a Kent fanzine, with the favoured title being ‘A Footballing Backwater’, before the idea was put forward of a name that certainly stood out, ‘Brian Moore’s Head Looks Uncannily Like London Planetarium’, a line from Birkenhead group Half Man Half Biscuit’s song, ‘Dickie Davies’ Eyes’.

HMHB were often to namecheck various minor celebrities in the lyrics of their songs, including turkey farmer and double-glazing salesman Ted Moult and the man who spent his career with his hand up an emu puppet, Rod Hull. Davies was the presenter of ITV Saturday afternoon show ‘World Of Sport’, whilst football commentator Moore hosted the lunchtime ‘On The Ball’ football preview segment in the programme. The title was chosen as Moore was also, of course, a huge Gillingham fan and one of the club’s board of directors for several years in the seventies and eighties. At a time when new fanzines were cropping up at an increasing rate, ‘Brian Moore’s Head’ tended to get mentioned due to its somewhat bizarre name, the ultimate recognition being the national exposure provided by a plug on Ian St John and Jimmy Greaves’ show, ‘Saint and Greavsie.’

Having been a regular home and away Tottenham follower, by the end of the 1987-8 season I’d become fed up with going on my own to most games and, in addition, the cost was going up at a fast rate. So, I didn’t renew my membership that summer, deciding to only pick and choose a selection of matches to attend. Having only missed one or two home Spurs games a season for a few years, I booked a holiday that coincided with the start of 88-9, meaning I would miss the club’s first home fixture on the opening day. I gathered that, once I didn’t go to one match, it would be easier to not bother with others.

However, my plan went awry when Coventry’s visit to White Hart Lane was postponed hours before kick-off, caused by over-running building work at the stadium. It did however prove easy to break the habit and my attendance during the season was greatly reduced in comparison to previous seasons. I still loved football and was drawn back to Gillingham, whom I’d still been watching half a dozen or so times a year, having been a season ticket holder at Priestfield in the early eighties.

There wasn’t the sense of fans being ripped off lower down the leagues that existed in the top flight. On the second Saturday, the Gills were away at Aldershot and, fancying the idea of seeing a game, I went down on the train. After arriving at Aldershot station I bumped into Robin Halls, whom I had known since the late seventies, when we had been part of the group of Howard School rascals who could usually be found lurking in the downstairs back seats of the 145 bus, as we journeyed to and from our educational hotspot. Robin, the editor, sold me one of the few remaining copies of issue one of ‘Brian Moore’s Head’, to be referred to mainly, from now on, as BMH.

It had been launched the previous Saturday, at the home game against Swansea City, on the opening day of the 1988-89 campaign. Four hundred copies had been printed and it was priced at 40p for twenty pages. The first ever BMH was sold in McDonalds in Gillingham High Street at approximately 1.30pm that afternoon, and most of the print run had been snapped up by kick-off. 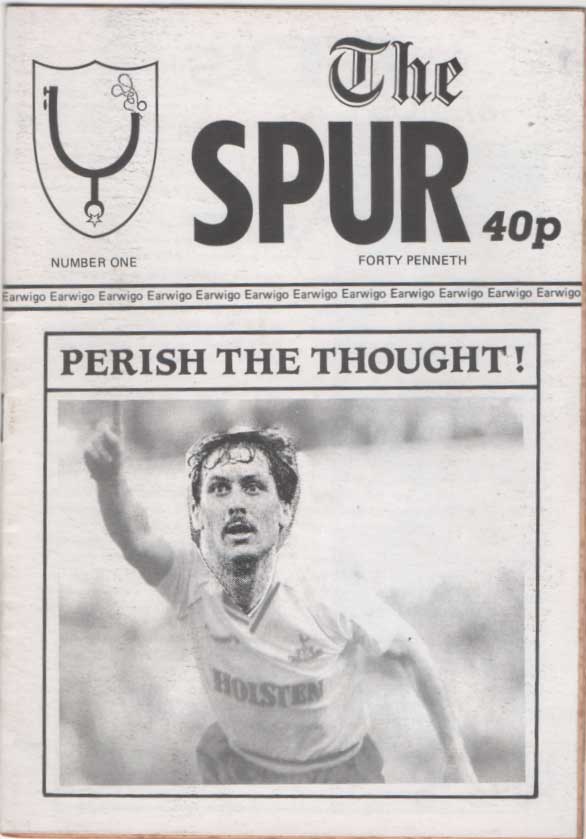 I read the first issue on the train back from Aldershot, having seen us romp to a 2-0 victory in the sunshine. The editorial set out the aims of the fanzine, ‘Well, I’m not going to bore you with the usual half-page about offering an alternative looks at the Gills, giving the fans a say etc. Well, yes, I am actually. Hopefully we will be providing a supporter’s eye view. We aren’t going to be anti-Gills, but will voice criticism where it is felt fair.’ The editorial team was listed as Halls, Mohammed, Baker and Lynham, whilst the first article was ‘Nightmare at Priestfield’, a team of the less memorable players to have turned out for the club, including Billy Lansdowne, ‘Whenever he scored, we lost.

It’s just as well he only did it twice’, Ian Macowat, whose ‘main contribution was to cause endless arguments amongst the fans on how you pronounced his name’ and Colin Ford, who ‘made his debut at Plymouth in ’80 and impressed to such an extent that he never played again.’ BMH appealed for fans to send in their own worst Gillingham eleven for future publication.

Other articles included a piece on Keith Peacock, a ‘Typical Awayday’ about a New Year’s Day trip to Bournemouth at the beginning of 1985, and a plea for the club to tear down the perimeter fences at Priestfield. ‘Memorable Matches’ looked back to a feisty encounter at home against Swindon in March 1979, whilst ‘Tell Me Moore’ began on the subject of our matchday magazine, then veered off into other subjects for a while before the author recalled what he was meant to be writing about, with the piece including, towards the end, ‘So what we can we expect from this season’s programme? (the original focus of this article until I started waffling about other mildly interesting topics).’

The first issue had made a loss, but any future profits would be used to improve the publication and ploughed back into the club through a sponsorship scheme. Issue one had been impressive, with plenty to read, and I was looking forward to what the team would produce for the second edition.