Issue two of BMH, launched at the home game against Chesterfield on 8 October 1988, included local newspaper reviews of the first edition.

The Evening Post, the Medway daily in those days, went with the headline, ‘New fanzine makes mark on début’, and stated that the publication was ‘well worth the cover charge of 40p’, and featured ‘caustic comment on club affairs’.

The following appeared in the weekly Chatham Standard, also now defunct, ‘Brian Moore’s Head is described as the alternative magazine and consequently uses language and stories designed to shock. They also carry amusing analysis – of referees, matches etc – and generally provide a read which is downright hilarious and pretty witty too.’

At twenty-four pages, BMH2 contained four more pages than its predecessor, and its editorial commented favourably on the club’s matchday magazine, ‘I was pleased to see a major improvement in the programme after last year’s effort. The price increase is well worth it considering the dramatic increase in quality - both visually (colour at last!) - and in content.’

On the same page was a list of the places, other than Priestfield, where you could buy the fanzine. These were London, Nottingham, Birmingham and Maidstone, as the new publication spread across England. With the number of different fanzines in excess of sixty and growing every month, BMH started to review a selection, beginning with a few of their favourites, including ‘The Leyton Orientear’ and the ‘Arsenal Echo Echo’. The reviews ended with, ‘Brian Moore’s Head Looks Uncannily London Planetarium’, which was described as ‘a load of c**p. And what a ridiculous title.’

‘Memorable Matches’ featured an away game at York City in November 1984, in which Gillingham conceded seven goals, ‘After five minutes it was apparent that the defence was having a collective day off, as we were 2-0 down and looking decidedly dodgy.’ Only a fortnight earlier the Gills had let in five goals at Brentford.

The BMH team had sifted through their old copies of ‘Football League Review’, the official publication of the Football League that was given away as a programme insert during the late sixties / early seventies, and re-printed some of their letters. One on the subject of what could be done to encourage attacking football suggested a different points system. 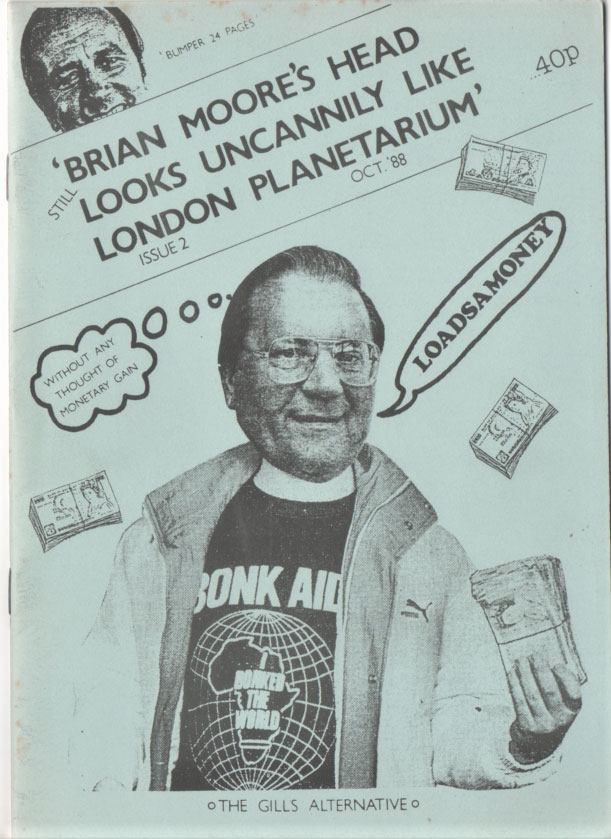 This was of course, in the days of two points for a victory and one for a draw. The writer proposed five points for an away win, four for a home victory, two points for the home side in a score draw and three for the visitors and a point each for a goalless game. Another correspondent was keen for the referee’s assistants to be more high profile, ‘It is high time moves were made to make linesmen more easily identifiable, but why stop at fluorescent jackets?

In a bid to curb football hooliganism, in the summer of 1988 the government had announced that, from the beginning of the 1989-90 season, fans would require a membership card to enter any league ground. The plan was to have a national list of members, from which any troublemakers would be struck off, if arrested and convicted of violent behaviour. BMH covered the subject in issue two, stating that membership cards would only deter the thousands of casual fans wishing to attend football. The article looked at what effect the move would have at Priestfield, ‘The implementation of a membership scheme looks even more crazy when you look at a club such as Gillingham.

In the last ten years I cannot remember any serious incidents, only the odd short trivial push and shove and the occasional rush towards the station. Apart from that, the one incident many people remember was the infamous attack on referee Hutchinson by an irate spectator at the 1978-79 home game against Swindon. Can anyone remember Gillingham being the scene of a riot or serious incident? I, for one, cannot.’ Also mentioned was the major problem of cost. At a time when the club couldn’t afford to re-vamp the condemned, wooden Gordon Road Stand, nor re-build the dilapidated toilets at the ground, the writer believed that expecting the Gills to finance the rebuilding and computerisation of all the turnstiles was ridiculous.

Opposition to the membership scheme was mounting. Another piece in the same issue included, ‘What supporters of all clubs need is a national campaigning organisation or union, so that football authorities have to sit up and take notice. This would serve the dual purpose of giving us a voice in the future of the game and of our clubs, and also present a respectable face for the public. With the latter, the Government would no longer have the same freedom to ride roughshod over our interests, as they have now. The organisation is already there in the Football Supporters’ Association.

But it needs you!’ Fans were urged to join, with the membership fee just £2 for adults, which equated to about fifty three minutes of watching the Gills. Printed opposite, very conveniently, was an application form and an article written by the FSA outlining their aims, ‘Football supporters are under attack from hooligans, politicians, property speculators and even some clubs, who appear to care little for the fans who provide them with their living. We are pushed around and exploited but rarely listened to. Over the past three years, the FSA has sought to change all this.

We have had some success, but with the Government seeming hell-bent on destroying football “as a spectator sport”, we need to be bigger and stronger.’ Schemes the FSA were involved in at the time included; increased ticket allocations for Cup finalists, better facilities at grounds for everyone (especially women and the disabled), effective measures to eradicate racism and racist chanting and battling against the compulsory membership scheme. The FSA stated, ‘Most of all, we want supporters to be involved and represented at every level of the game. Loyalty to the game must be our over-riding loyalty. We must take responsibility now and act in the best interests of the game. The only way to change things is to organise and act together.’

The launch of BMH at the start of the 1988-9 season coincided with the beginning of several years of struggle for the Gills, with the club’s manager departing in October 1988, after eight games in a run of successive league defeats that eventually reached ten. Issue three’s editorial began, ‘So Paul Taylor finally paid the price for Gills’ disastrous run of results.

There is no doubt that his dismissal is the right decision – Paul Taylor’s reign will not be remembered with any affection by the Gills supporters.’ The piece also included, ‘At the time of writing, the name of the new manager has not been announced, but it is hoped that the Board do not make the mistake of approaching John Hollins – this would be a disastrous move in the light of his record at Chelsea, whose poor results and internal arguments threatened to tear the club apart.’

The new boss was actually named after the editorial had been written, but before the issue went to the printers. Nowadays, such a scenario would involve a quick change to the text on the PC but, back in the typewriter-era, with the page typed and set out, there was little that could be done except append ‘P.S. Long Live Burky’ to the bottom of the editorial, the new manager being former Tottenham chief Keith Burkinshaw. BMH’s cover promised a tribute to the outgoing boss inside, this comprised of a picture of him leaving Priestfield for the final time, a headline of ‘Bye Bye Paul’ and the following quote from the Evening Post, ‘The departure of Paul Taylor and an end, hopefully, to some lamentable performances under his management, seems to have produced a great tide of relief.’ 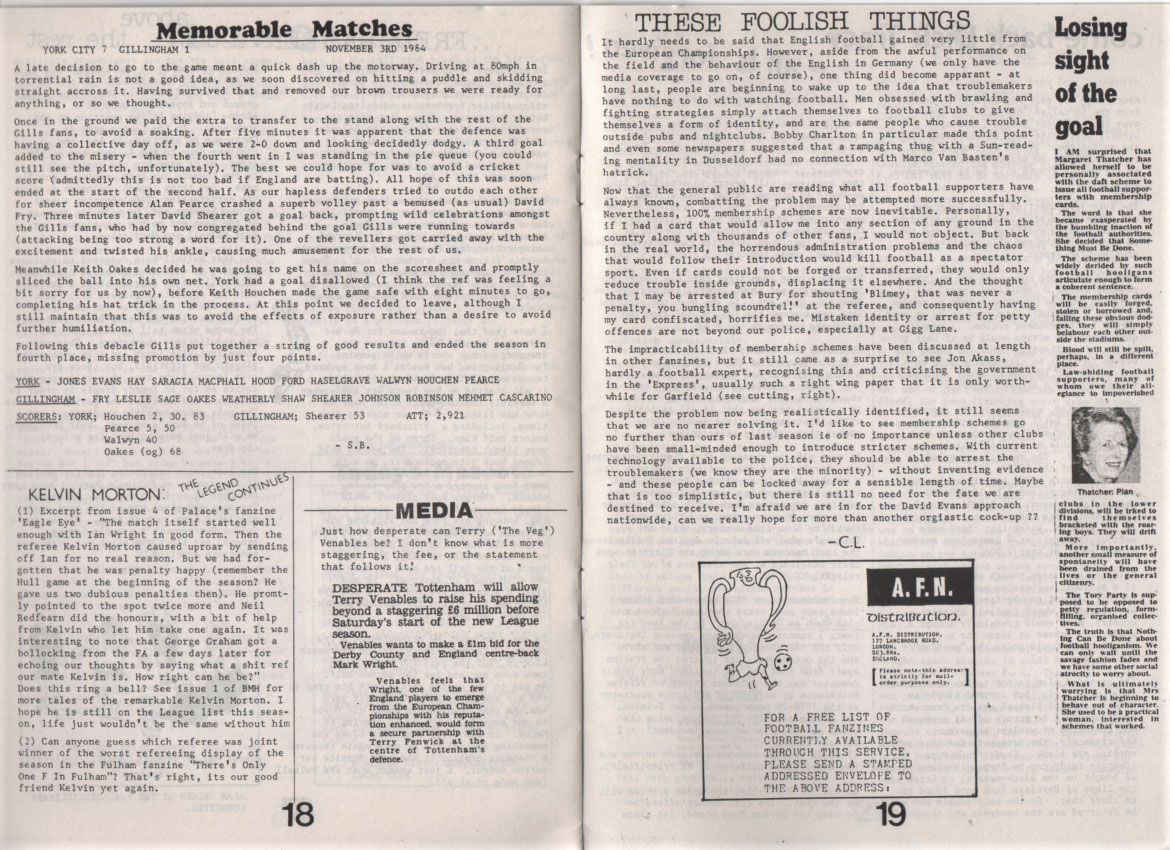 One of the problems in the early days for fanzines, before desktop publishing and the ability to fit text to pages, was how to deal with the annoying little spaces left at the bottom of a page after an article had been typed up. One such gap in issue one had been filled with the question, ‘Whatever happened to Spangles?’ prompting one Gills fan to write to Mars Confectionery about the boiled sweets. He received a reply, which was printed in issue three, with the fanzine mentioning that the response had taken a long time to arrive due to the postal strike and the fact that it had been sent from Mars! The confectioners stated that the product had become less popular with the public and had been ‘rested’, but there was still hope, ‘Whilst we reluctantly decided to discontinue Spangles, we do review the situation periodically and, if there is a swing in public taste back to this confection, we shall certainly consider its re-introduction.’ However, BMH asked how could there be a ‘swing in public taste’ if they were no longer being made.

It seems that there was quite a lot of letter writing going on, with the fanzine dropping a line to the Football League on the subject of referee Kelvin Morton, who was gaining a certain amount of notoriety with his officiating. The League’s reply was reproduced in BMH’s third edition, ‘In answer to your letter of 22nd October, I cannot agree that Mr Morton is totally incompetent as you suggest because there is much evidence to the contrary. You appear to have read many articles about this referee and I wonder if it is a case of a dog having been given a bad name’, prompting the fanzine’s editor to ask, ‘Why have the League got a dog as a referee?’

As a variation on the worst Gills teams that had appeared in the first two editions, issue three contained a Mis-spelt eleven, a side featuring those players who had suffered the ignominy of having their names spelt incorrectly in line-ups in away match programmes. The author wrote, ‘Although all clubs do it, I would particularly like to thank the programme editors of Rotherham, without whom compiling this team would have been considerably more difficult.’

It was the Millers who made a significant error with Ken Price, after the striker had left Gillingham and was playing for Reading, but I am unable to actually mention how Ken’s surname was spelt, though I imagine some people will have no difficulty guessing, especially if I let slip that the error was in the last letter! Also in the team was Karl Elsey, who became Carl Sllsey at Fulham in 1986-7. Grimsby turned David Shearer into David Sherare, despite the fact that he had previously played for the club, whilst Trevor Quow was Crowe at Cambridge and Quark at Faversham.

By the time issue three was published, the first edition had completely sold out. The fanzine was steadily improving and was now available in Scotland, stocked by ‘Football Crazy’ in Edinburgh, as world domination beckoned. The team responsible had been boosted from the original four of; Robin Halls, Simon Baker, Chris Lynham and Ali Mohammed, to seven, with the new names; Eddie Allcorn, Chris Read and Stuart Chilmaid. The fanzine also showed their appreciation for a vital contributor as far as the fanzine being produced was concerned, ‘Thanks again to Hilary for help with typing’.