Cass recalls his memories from the home leg of the 1987 play-offs against Sunderland.

Legendary striker Tony Cascarino said the club’s home fixture against Sunderland in the 1987 play-offs was “the greatest night” in his Gills career.

Today [May 14] marks 33 years since the first leg at MEMS Priestfield Stadium took place and Tony fondly remembers the occasion, netting a memorable hat-trick as Gills took a 3-2 advantage to Roker Park a few days later in front of a near 14,000 strong crowd.

Speaking exclusively to the club website Tony said: “I remember being very nervous before the game. Sunderland were a club who had been much higher up in the league; when we got them we thought it was a massive result if we could get past Bob Stokoe’s Sunderland, which we did.

“This was a pivotal part of my Gills career, and to score five goals in that tie, including a hat-trick at Priestfield, it was a rip-roaring match which everyone expected.

“We had the lead, they took the lead, the game turned around and from the very first minute of the first game there appeared to be a lot of twists and turns.

“I think we conceded first at Priestfield, we were 1-0 down which I remember due to a penalty and then my overhead kick was a bit of a freaky goal. I loved my second goal, which was a header, albeit at close range and then I slid in for my third which gave us a 3-1 lead.

“They got a goal towards the end of the game to make it 3-2.

“If you asked me for my greatest night at Gillingham I would probably go for that game because of the atmosphere, the result and getting the hat-trick and it was my moment of glory which, ultimately, didn’t quite get us into the second division.

“We were an attack minded team and Keith Peacock put together a really ambitious side with goals in. We had David Smith on the left, Terry Cochrane, Howard Pritchard, Dave Shearer, Karl Elsey, Trevor Quow. We had a lot of attacking minded players and one of Keith’s best achievements was putting a side together who had a front foot type of Football, and that suited me.

“We went to try and win games. We could concede goals quite easily and score quite freely.” 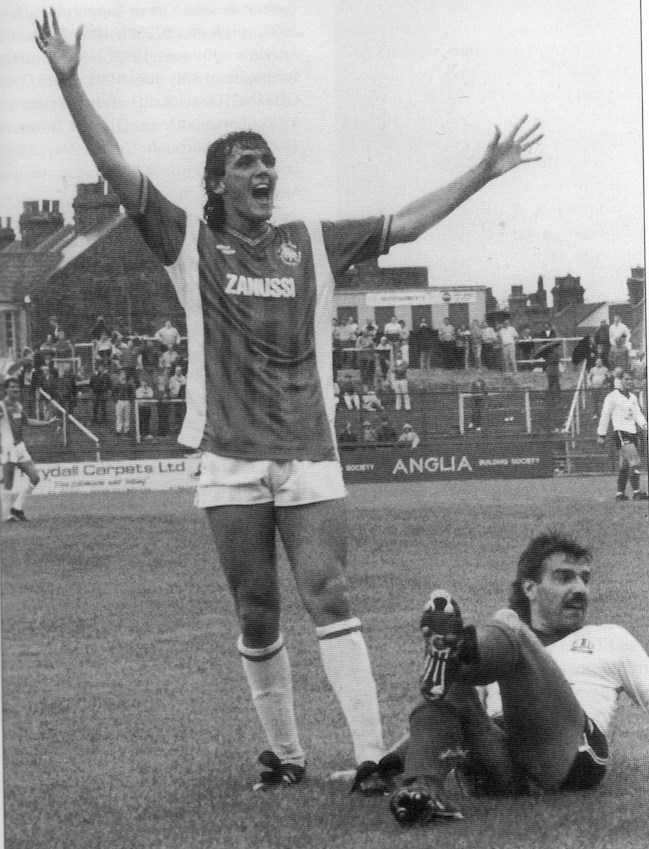 The striker, who netted 110 times in 269 appearances for the Gills, said that he had not made any decision on his future and was keen to see the club promoted before even considering his next move.

He added: “I hadn’t made a decision by then, and I did say at the time, I didn’t want to think about my future until Gillingham’s future was settled. I felt I owed it to Gillingham not to try and seek my own personal decision; it’s the longest club I’ve ever played for, I had come from non-league and had been given my chance by the Football Club and I was keen to end things in the right way, i.e. wait until the play-offs was done as my focus was getting us up.

“I am a believer in some things just naturally end. I spoke to Keith before the play-offs and I think he realised it was time for me to go; he knew it was my opportunity to perhaps play higher.”