Gills take Charlton all the way to penalties, but miss out on third round spot.

Gillingham were knocked out of the FA Youth Cup in dramatic circumstances on Tuesday evening, after losing to Charlton Athletic 9-8 on penalties at the Bauvill Stadium.

Josh Chambers had put Gills ahead only for Dylan Gavin to equalise just after the hour mark, and the hosts defended brilliantly to force extra-time, where either side could have won the tie before going to penalties.

Gills started the brighter of the two teams and enjoyed more of the possession in the opening stages, with Gerald Sithole testing James Beadle from a tight angle inside the penalty area. Moments later Jimmy Appiah tried his luck from range; he caught the ball well from 25 yards but fired his effort just wide of Charlie Walker’s right post.

Sithole was involved again on 12 minutes when Lintott drove forward on the right side and played an excellent low ball into the heart of danger zone. Sithole got a shot away, it got a crucial deflection to concede the corner which was well cleared.

Just shy of the 20 minute mark Gillingham had to be at their defensive best to stop Dylan Gavin opening the scoring for Charlton. A loose ball inside the box allowed the striker to pull the trigger. Walker, and one of his defenders, threw themselves at the shot and it was enough to get the ball away.

That block proved pivotal as a few minutes later the Gills found themselves ahead. Chambers positioned himself just outside of the box, and a short pass to the forward enabled him to get a shot away first time.

Josh’s right footed effort from 20 yards was perfectly struck; it was whipped up and over the goalkeeper and into the back of the net. An excellent effort.

Charlton nearly found their way back into the game on 34 minutes and it took an incredible save from Charlie Walker to deny Campbell from the edge of the box. He saw it late but at full stretch dived to his left and got a crucial touch to get it clear for a corner, which was cleared.

Charlton applied more pressure as the half came to a close and created two chances within the space of a few moments as the seconds ticked down. Gavin was tackled at the last moment by Lintott and Maher as the Gills duo forced a corner, before Walker was at his very best again to prevent Santos from finding the inside of the post from a difficult angle.

A late free-kick from Akehurst was well saved by Beadle to prevent Gills from going two up prior to the interval.

Charlton started the second half and were immediately pressing the Gills goal, but Walker remained relatively untroubled. However, at the other end, James Beadle made an impressive stop to deny Harry Maher.

The visitors were progressively asking more and more questions, and on 62 minutes the Addicks finally found a way through when a quickly taken corner was headed home by Dylan Gavin.

This swung the momentum in the tie and Gills had to dig in and maintain their shape. Baker-Moran was substituted to injury which removed an aerial presence, but within a few minutes of the striker going off, the hosts nearly found a second goal.

Akehurst got forward and delivered an excellent cross from the left. Ethan Smith was on the end of it but a crucial Charlton touch conceded a corner which was punched away.

In the closing stages of normal time a Gills free-kick was headed clear by Gavin and this helped launch a Charlton counter attack. Walker made an excellent stop to concede a corner before coming out bravely to collect the delivery from his left side.

The visitors created one final chance in the 90-minute period. Campbell was through on goal, was quickly being closed down, but with the goal at his mercy he sliced his shot over the bar.

With the scores level after 90 minutes the game required the two 15-minute periods of extra-time. The first 15 minutes saw Charlton enjoy more of the possession, but Gills were defensively solid and headed away anything that was sent into the danger zone.

Jimmy Appiah tried his luck from range but, from 25 yards, his effort cleared the frame of the goal by a good few yards.

The second period started with a Gills chance. Grode held up the ball well and played in Sithole on the left side; he drove into the box, fired an effort wide but as he pulled the trigger was brought down. The referee waved away the penalty appeals.

Chambers had a shot blocked, and Medhurst struck the side netting with a header. Following another penalty appeal, dismissed by the referee, the game went to penalties.

Charlie Walker saved Charlton’s first spot kick but from there on in the visitors slotted away every single one, with Gills missing their tenth penalty which was enough to send Charlton through. 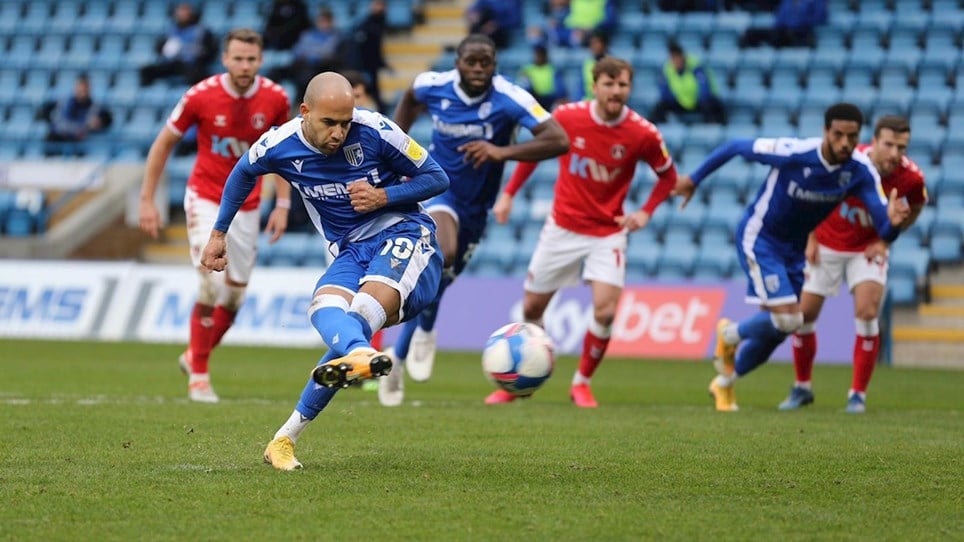 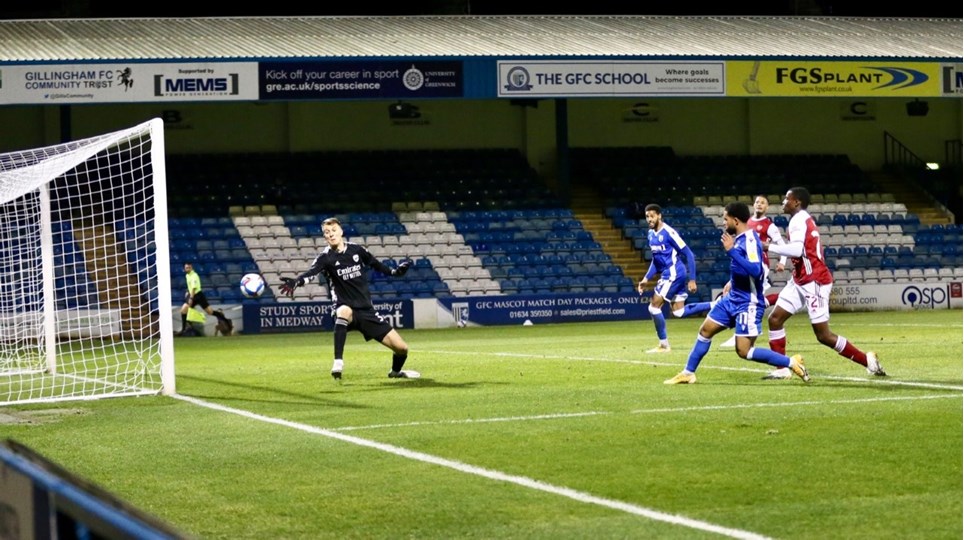 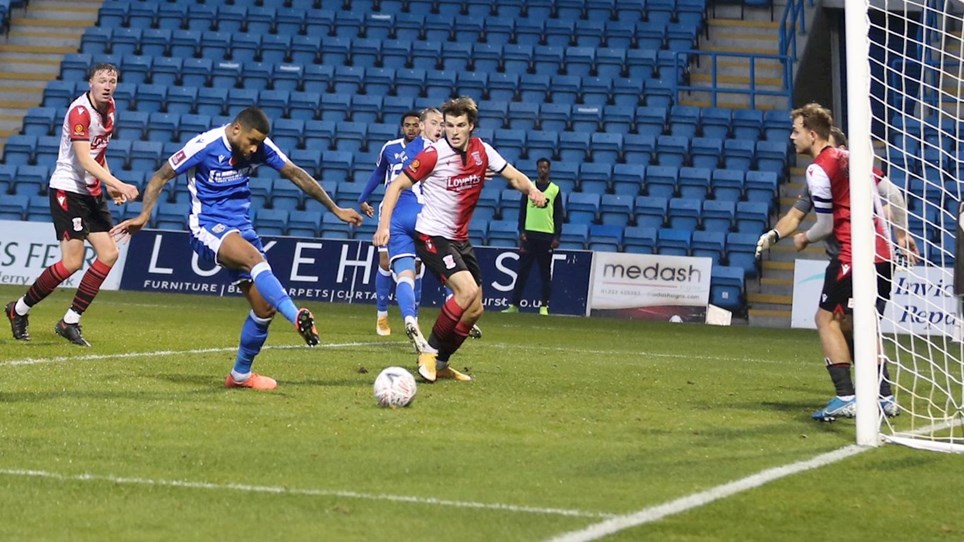 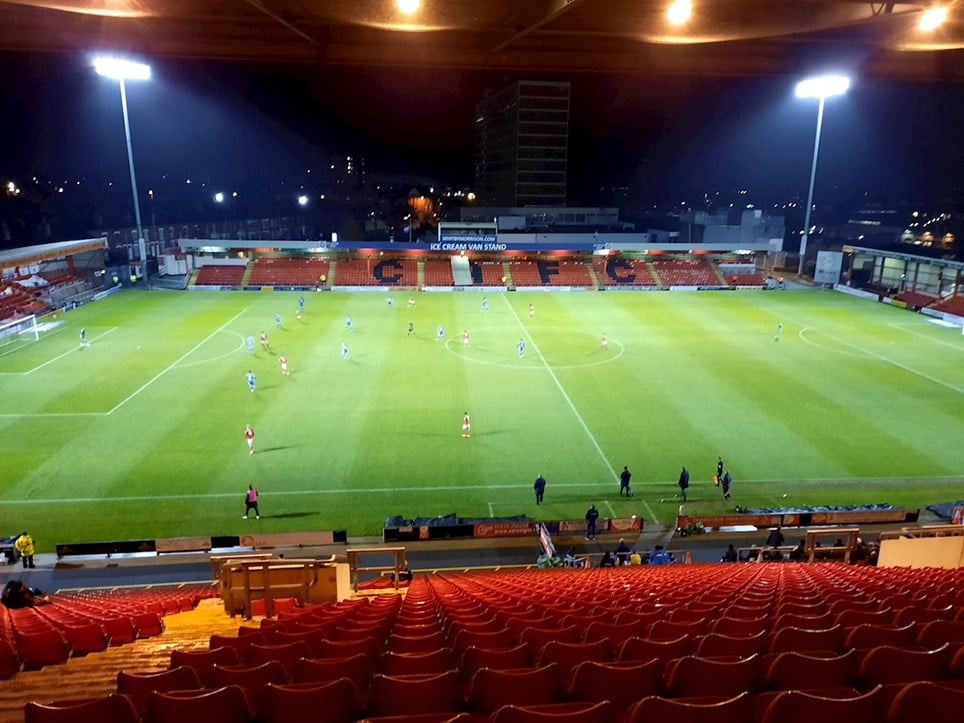