Exeter hang on to secure 3-2 victory at ME7 in FA Cup second round.

Jack Bonham came inches away from becoming the cup hero as three Exeter goals in ten minutes was enough to knock Gillingham out of the FA Cup at the MEMS Priestfield Stadium on Saturday afternoon.

Vadaine Oliver had initially given Gillingham the lead in the 22nd minute. It came after Alex MacDonald dispossessed an Exeter defender inside the penalty area, and his pass found Oliver in space as he prodded past Jokull Andresson.

Just short of the half-hour mark Nicky Law equalised. Gills lost possession outside of the penalty area, and after he worked himself into some space, he drilled a shot across Bonham’s goal and into the bottom corner.

Joel Randall got the first of his brace in the 35th minute after firing a powerful effort beyond Bonham 15 yards from goal.

His second just five minutes later was another smart finish. A cross into the penalty area found Randall, and he managed to dribble his way into space before drilling a shot under Bonham and into the back of the net.

Dominic Samuel gave Gillingham a lifeline with just under ten minutes to go. He capitalised on a header back into the six-yard box by Oliver and volleyed into the back of the net giving Andresson no chance.

Bonham almost became the hero with the last kick of the game as Exeter failed to clear a Connor Ogilvie throw-in. The ball fell to the goalkeeper, but his stab towards goal went inches over the crossbar.

Steve Evans made one change from the side that defeated AFC Wimbledon in midweek as Christian Maghoma replaced Zech Medley, whilst Scott Robertson came back into the matchday squad having been rested on Tuesday night.

After a quiet opening ten minutes to the game, Dominic Samuel missed a guilt-edged chance to give Gillingham the lead.

After the ball ricocheted around the penalty area, it finally fell to Samuel. However, his shot from the edge of the six-yard box cleared the crossbar.

In the 17th minute, skipper Kyle Dempsey was next to go close for the League 1 side.

After Samuel had won the possession halfway in the Exeter half, he laid it off to Dempsey. The Gillingham captain drove towards the penalty area, but his goal-bound effort deflected wide for a corner.

Exeter were dispossessed inside their penalty area by Alex MacDonald, and he played a pass across the penalty area to an unmarked Oliver. The striker had all the time in the world to put the ball underneath Jokull Andresson, and into the back of the net.

However, just short of the half-hour mark, Exeter were level.

Gills lost possession near their penalty area, and Exeter worked the ball into the path of Nicky Law. He got some space inside the penalty area and fired a shot across Jack Bonham’s goal and into the bottom corner.

And not long afterwards, the visitors were ahead. Bonham mis-hit his clearance, and it allowed Exeter to counter-attack. They worked the ball inside the box before Randall smartly created space and blasted a shot into the back of the net.

And a third followed within just a few moments. Exeter got the ball into the danger zone and the ball fell at the feet of Randall. He did well to work some space before drilling his shot underneath the oncoming Bonham and into the back of the net.

Oliver had the first real chance of the second half, but his acrobatic effort looped over the crossbar leaving Andresson unchallenged.

Randall went in search of his hat-trick, but his shot from a tight angle curled high and wide of the goal.

Samuel had another opportunity in the 73rd minute. He managed to find some space from a Ryan Jackson cross but headed wide of the goal. However, it would not have counted as he was adjudged to have fouled a defender in the process.

In the 81st minute, the former Blackburn Rovers man did finally give Gillingham a lifeline.

Graham swung a cross deep towards the back post, and after Oliver kept it alive twice, he headed it towards the six-yard box. Samuel was first to meet it and volleyed the ball past Andresson in the Exeter goal.

Randall came close to his hat-trick with a few minutes left on the clock when his shot from range bounced and hit the post; luckily for Bonham and the Gills defence the loose ball ran clear of danger.

Bonham came whiskers away from becoming the hero at the end. Exeter could only clear a Connor Ogilvie throw as far as the big number one, but his left footed stab towards goal went just over the bar as Gills were eliminated from the FA Cup. 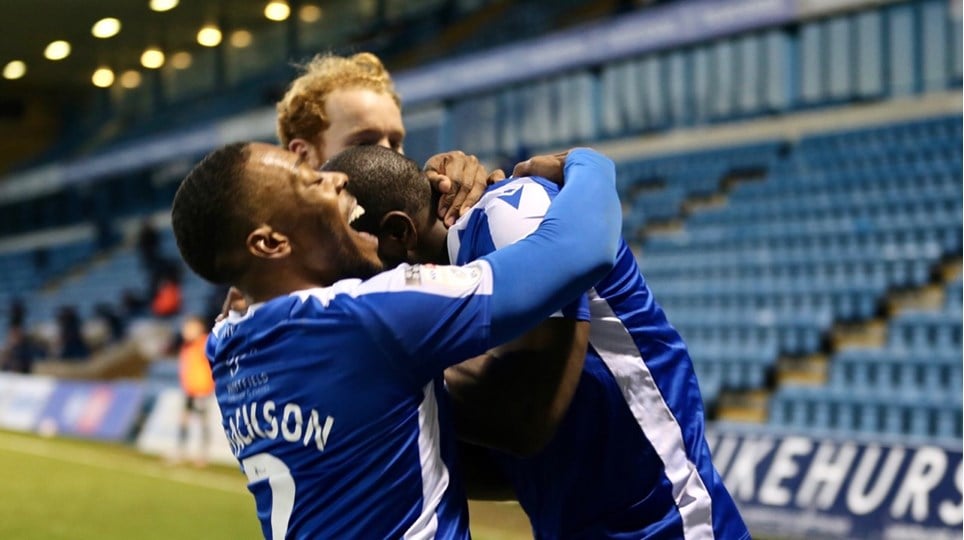