Steve Evans said his side more than deserved the late goal that clinched them a point in a 1-1 draw with Shrewsbury Town on Saturday afternoon.

Although the manager wasn’t overly happy with the first-half performance, he felt the second definitely deserved a result. 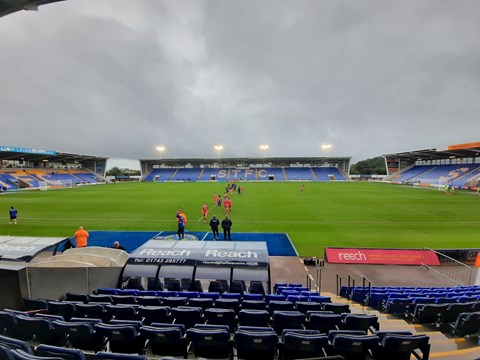 He said: “There is nothing in the first half that I recognised about us last week. I thought we were sloppy in possession; we didn’t close down with the intensity that we normally do; we didn’t play the passes quick enough, didn’t move the ball quick enough and we have to be disappointed with the goal we conceded.

“It’s a straight corner kick, and we have to say the challenge before that [on Connor Ogilvie] was horrendous. It wasn’t picked up, the game moves on and you have to defend it. It should be a simple clearance; we didn’t deal with that.

“We work ourselves into the game, in the second half we said we were going to have a go, we were going to make some changes as the half progresses to try and get back into the game. And everyone has seen it, including the Shrewsbury people and if they say anything different I’d be surprised because they have an honest Gaffer in there, apart from launches up the pitch or the set plays they played for, we were totally dominant.

"We went 4-2-4 to try and get back into the game and Dominic Samuel must be the unluckiest player in Britain when Vadaine Oliver drives across the goal and it hits him as he’s trying to get out of the way, but that happens.

“If that goes in we probably win 3-1, we were so far in the ascendancy. To be fair, Dominic Samuel has picked his spot beautifully and Vadaine is like Superman getting across the line. If he stands still it goes in. He tried to get out of the way and he has given us everything.

“We spoke about the youth, the energy, the character and the willingness to keep going and we got the goal and it’s more than deserved. We have left two points here today.

Graham’s goal came in the fourth minute of second half stoppage time, and the manager praised the winger for his performance.

He added: “He doesn’t do it [get into similar areas] enough; he is so naturally talented but you need to get him to work hard and, when you do, he’s such a natural talent. When we got promoted at Rotherham we had a player called Kieran Agard, he played on the right and people thought he was a striker. I played him where Jordan plays and he got 26 goals! Jordan Graham could do that, but he has to work as hard as Kieran did that season.

“In the 94th minute, if you look at the build-up, two or three players have gambled, and if you make the runs sometimes you get the break of the ball. To have the composure, from memory, to turn, side step and come back on your left foot and bend it into the corner, it was a sublime finish.”