Defender keen to get involved straight away after returning for second loan spell.

Tommy O’Connor has re-signed on loan with the Gills after shining last season, and he is looking forward to seeing what the club can achieve during the 2020/21 campaign.

The versatile left-sided player is eager to complete unfinished business, after the Covid pandemic brought an end to his first spell in March. 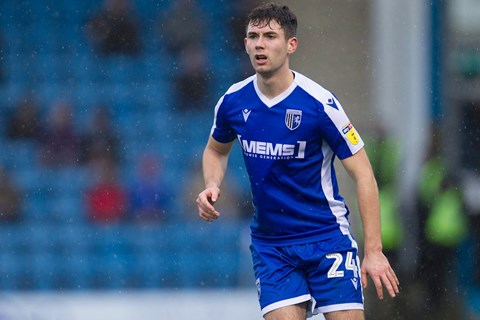 “I’m delighted to be back,” he said. “I had a good season last year. It was unfortunate it was cut short; I felt we were doing well. It’s nice to get it sorted now and I look forward to the season.

“I enjoyed everything about being here. Obviously the manager wanted me back and I know a few of the lads here. There have been a lot of changes but there are a few familiar faces. I also know the area; everything came together.”

The 21-year-old Irishman, who has already clocked up 32 appearances in a Gills shirt, has been keeping an eye on the Kent side and has been encouraged with what he has seen so far.

He said: “I watched the highlights against Wigan and I’ve seen the two goals at the weekend as well (Dominic Samuel’s double against Blackpool). It looks like they’re playing well and I look forward to joining the squad and hopefully we can push on and move up the table.

“Everything is positive. Everyone seems upbeat; it seems like a good camp, just like last year. I’m looking forward to getting to know the lads and get back training.”

If called upon for Saturday’s away Sky Bet League One clash with Shrewsbury he assures supporters he is fit, ready and confident.

“I’ve played three or four games since the start of the season for the Saint’s U23’s. U23 football is different to first team football; the intensity is not quite the same. However, I feel fit and raring to go.

“Shrewsbury will be a tough challenge; we got a draw last year. It’s a tough place to go. But the form that the lads are in, we expect to go there and hopefully get a win. A good performance and three points will be nice!”