Reaction from the Gills manager following win over Blackpool.

Dominic Samuel scored twice on his second debut for the club, but it was a complete team performance with the visitors restricted to very few opportunities, despite having a lot of possession. 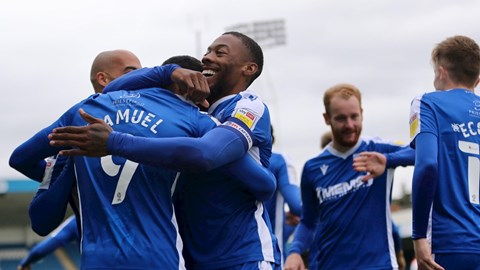 Speaking after the game the Gaffer said: I'm really proud of the kids in the dressing room. You look at the average age of the team; I was surprised myself how young we were! Considering we were playing against, I think, a team who will be in the top six at the end of the season, they are full of good players and had some good play, but we were certainly on top in the first half an hour; we played some wonderful Football ourselves.

“There is always a concern when you are one up but we started the second half really bright; we were on the front foot, got in behind them a couple of times and then Dominic scored with a fantastic finish. Brilliant play from Vadaine Oliver; he robs the centre-back and gives it to Dominic who produces a brilliant finish, the goalkeeper has no chance.

“Then we have had to battle haven’t we? They are a quality side who knock it about well so I'm very pleased. They are young men who are just starting their careers; we only have one or two older players in there. I am really proud of them.”

Samuel signed for the club on Monday and wasted no time in finding the back of the net. Three minutes were on the clock when he found the target from close range following some fine work from Connor Ogilvie and Jack Tucker.

The Gaffer added: “To be fair it’s a fantastic corner from Scott Robertson; we really like him, it’s a wonderful corner, a brilliant run from Connor Ogilvie, good retention play from Jack Tucker to put it back in and I was expecting Samuel to be there; to put it in is a bonus for us but I was expecting him to be in the middle of the goal because that’s what we have worked on.

“He has come in with a real workmanlike attitude, he has trained with us for the best part of a week so he is getting a little bit fitter and we kept him on the pitch a little bit longer. During a water break he said he didn’t want to come off; he was tired but it will benefit him greatly.”