Gaffer determined to bounce back from Hull defeat with positive result against Wigan at the DW Stadium.

Steve Evans is ready to lock horns with Wigan this Saturday but knows his team will need to be at their best to leave with a positive result. Despite the opposition's points deduction and financial issues, the Gills manager saw enough first-hand to know Wigan are very much a force in Sky Bet League 1.

“I went to watch them last week at Ipswich and it was a very impressive performance that deserved something,” said the Gills boss. “When you can pick up a team sheet and still see some of their players, like Joe Garner, who leads the line, a proper, proper striker. I could go around their team. The boy (Gary) Roberts is 35-36, but his left foot is a wand.

“I know they have one or two younger players but it is still a very impressive 14-15 players. I don’t think Wigan are in any danger whatsoever but for the sake of that football club and for the sake of football they just need to get sorted out don’t they?

“But that’s not my business, my business is to go there and try and get a positive result.”

Evans will be hoping to get one over a respected friend in John Sheridan; a person he rates as a player and a manager.

“I know him very well,” remarked Evans. “He’s a Sheffield boy. He was absolutely fantastic as a player. A really good guy, a football guy. So is Leam Richardson, his number two. Proper football men.

The Gillingham squad were given a recent welcome boost with the signing of Coventry starlet Josh Eccles. The 20-year-old midfielder lined-up against Gillingham on Tuesday and came back to sign on-loan just two days later. 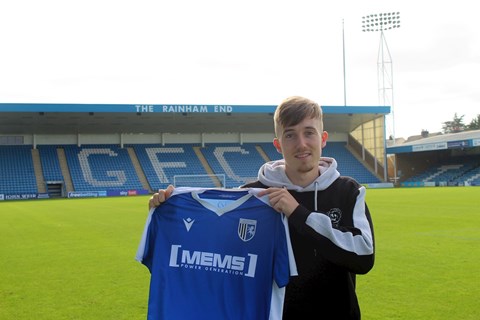 “I’m grateful for Mark Robins for allowing it to happen so quickly,” said Evans. “The boy got home very late on the Coventry team coach and he was he was back in Medway on Thursday. He trained this morning. He was really impressive.

“He’s a passer of the football. His abilities are unquestioned. He sits in and moves the ball quickly. He adds something we were looking to add. Physically he is a big boy. He made eleven appearances in a title-winning team. To be in and around that team speaks volumes of the type of player he is.”

After the luxury of midweek cup football, Evans is ready to get back to the bread and butter of league football and is keen to get Gills’ season up and running.

“We need our first win, our first clean sheet, our first goal,” he said. “These are the benchmarks we want to get. We are a young group. It might take a few weeks for them to get to understand each other a bit more. We have to focus on ourselves and keep working hard on the training ground. We have some very talented footballers!”