Gills number nine could make his second debut for the club this weekend.

Dominic Samuel, the latest member of the club’s evolving squad, said he didn’t have to think too hard before making his return to the Kent club. 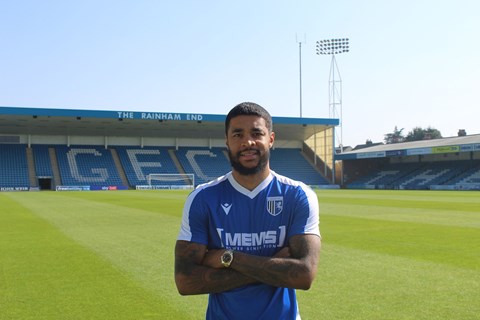 The in-demand 26-year-old striker, who signed his paperwork on Monday, faced the press before the Sky Bet League One visit of Blackpool, and he spoke of his warm relationship with the Gills fans, his desire to be number nine, and his high ambitions for the season.

“I had a few options, but it was a no-brainer coming to Gillingham because I had a good loan spell and I know what the Club is like. It’s close to home and I feel like when you are close to home with family and friends and you are happy it becomes a good thing when you step on the pitch on match day.

“The Club, the staff and the Gaffer have all made me feel so welcome and that’s a big factor for me coming here. As a player, you want to feel wanted.

“I feel at home. The fans especially made me feel welcome last time. That’s what made it a special moment for me to come back.”

On his development since his first spell

“I feel like I’ve matured more as a player since I was last here. I have experience that I can give the squad. Hopefully, I can use that experience to help the team.

“I’ve improved my understanding of the game. I can find weaknesses in the opposition’s team and use that to my strength.”

“As a striker you always want to be a number nine. For me it’s more than just the number on a shirt, it’s my favourite number outside of football."

On his new team-mates

“After watching them against Stoke, a good Championship team, I was impressed; we made it hard for them. If we can do that week in, week out in League One then I don’t think we will have a problem at least getting in the play-offs, if not automatic promotion. There are better teams coming into this league, so I’m not saying it’s going to be easy.

“There’s a lot of young boys here learning the game but they’ve got talent. The talent I’ve seen here at the moment is unbelievable.

“It’s a good Club, a good set of players and an experienced manager who knows about the league, so hopefully as a squad, and in football you never know, we can go all the way.”

On making his debut in an empty stadium

“It’s a bit upsetting, but with everything that’s going on, it’s better to be safe than sorry. Hopefully the fans will return soon. I would like to have played in front of the fans but you just have to adapt to what the situation is.

“The players will be ready. Everyone’s confident. Everyone here is a confident player. We will be in that changing room knowing we are going to do well in the game, and hopefully get three points.”