Reaction from the Gills manager.

Gills manager Steve Evans said it was a huge disappointment to see his side let slip a two goal lead to draw 2-2 with Northampton Town at MEMS Priestfield Stadium on Saturday afternoon.

Goals from Vadaine Oliver and Olly Lee had put the hosts in a commanding position, but Northampton threw caution to the wind in the closing stages and struck twice in a short space of time to take a point back to Sixfields. 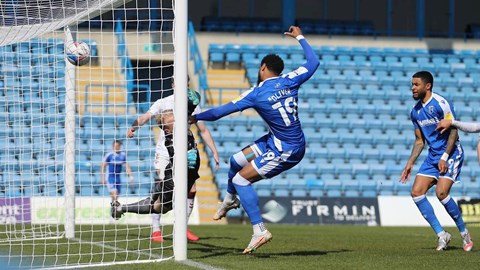 Speaking after the game, the Gaffer said: "It's a game we have, again, gone 2-0 ahead; should have been four or five. With the first I need to see the goal back to see where my defenders are, and for the second the defender is outmuscled from the corner.

“There are two bits of it today; the chances we didn’t take, and I can count four or five. At the same token we have to defend properly. It's a huge disappointment as you can imagine. 2-0 is always a difficult scoreline and we’ve got hurt by it in the last seven days.

“You need the third goal to go in, it’s quite simple, and then the game really opens up.

"If you can't defend you don't win games and we've not been able to defend in two key periods in two games, last Saturday and today.

"We have come so far from what was expected of us, so far. We fight on next week, we take the disappointment and prepare for Burton the way we did for Peterborough."

The boss was asked what the message was to the players following the full-time whistle.

“We had words, but more about both boxes really,” he said. “The first one is a ball into the box, there are two strikers free in the middle of the goal and for the second the corner is hung up and he outmuscles him. The other argument is that we should be five or six up, comfortably. We are talking about big chances, good chances to players who would normally take a chance. We didn’t, we’ve failed in both boxes.

“Some of the players have been incredible and produced really special performances, but when it’s really mattered we’ve been found wanting in key positions which has cost us. We’ve not been able to defend our box from aimless balls in last Saturday and today and seen people left unmarked, that’s a real problem because we work so hard on it Monday to Friday.

“We will see what the results are Tuesday, we’ll train properly and prepare for Burton Albion. Just because you are not in the play-off group it doesn’t mean you don’t fight to win.

“If we can’t finish in the play-off group we want to finish one place out of it, or two places out of it. If we look after last week and look after today we are right in there with two to go. We’ve just not had the quality at certain times."

Gerald Sithole made his professional debut, coming on as a second half sub, and the manager was delighted to see an academy product take to the field.

He said: “I think he’s a tremendous young talent and I don’t think he’s offside when we put him through on goal either. It would have been interesting if had he gone on and stuck it away.

“It’s not every day you make your Football League debut as young as he is; he will play a lot more and he’s a young kid who conducts himself properly and if he was your son you would be very proud.”