Post-match reaction from the Gills manager.

Gills boss Steve Evans says his side are “no longer in the mix” following Saturday’s 3-2 defeat against Oxford at the Kassam.

Vadaine Oliver and Robbie Cundy both scored to put the visitors 0-2 ahead, but Karl Robinson’s men took advantage of some individual errors to walk away with all three points. 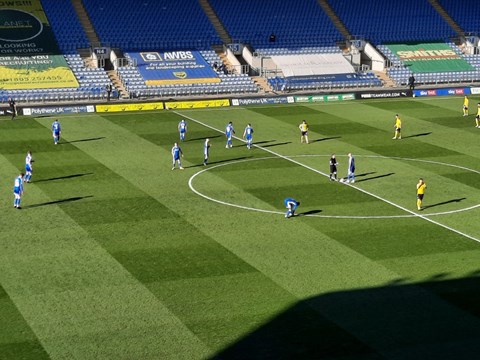 The manager said he couldn’t fault his players for their effort or work rate, but said a lack of concentration in the closing stages of the game cost them dearly.

He said: “For 73 minutes the boys have carried the plan out. The plan was to get the ball down, play and attack them. We did that, were two up and it could have been three or four. You can't then not mark individual players. You have to match runners.

“We get the second goal, they get one back which gives them a lift. We didn't do our own jobs. When you are two up you shut the game out.

“You have never won until you've won. The goal on 74 minutes gets them back in the game, that gives them the belief and they put balls in the box and take chances. We didn't do our jobs individually. They have given everything but mistakes cost you.

"We will take the hurt, we go away disappointed. Take nothing away from Oxford; they've dug in and found a way to win. We now need to come up with a game plan for Tuesday.

“We accept we are done now. It’s been `what ifs` in recent weeks. Doncaster 2-0 up, Rochdale, Burton. We have been trying to resurrect it and keep it going but when big moments have come we haven’t dealt with them.

“We are as down as we’ve been all season, it’s a big opportunity lost because we had 75/80% of the game. We are out now; we are not silly, Oxford have a six point advantage and better goals so it's more seven.

“We take the hurt, we have been pushing up hills from a poor start to the season. From our point of view we will focus on ourselves, but we go away disappointed.

"We are not in the mix anymore, but we'll go and try to represent the Football Club with some real pride on Tuesday when we take on, for me, a team that is absolutely outstanding. It will be very tough.”