Steve Evans says his team are still in the fight for a play-off place in Sky Bet League 1 despite drawing 0-0 with Shrewsbury at home on Saturday.

Connor Ogilvie and Vadaine Oliver both went close for the Gills, but they were forced to settle for a point in a result that sees the club go tenth in the table, and four points shy of Lincoln who currently occupy the final play-off position. 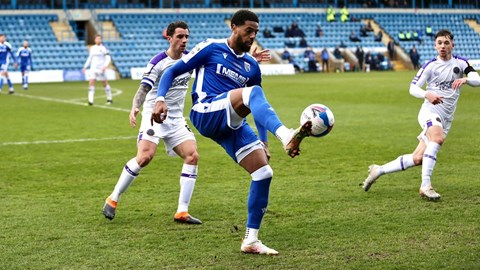 However, the manager believes his side are still capable of finishing in the top six, but will need to win four of their remaining five games to have a chance of doing so.

He said: "I don't think it's a fair result. I think it's certainly two points left behind. They bossed it a bit more than we did in the first half and we didn't play with any fluency, but in saying that they don't make a chance and we make two big, big chances.

"We identified at half-time where they were strong, we changed the system and the personnel a little bit and there is no doubt it worked. We suddenly bossed the game and they had to play more on the counter attack.

"What was missing in our performance today was some real quality.

"How many real good crosses did we put into the box in search of our strikers? Not enough.

"It's a feeling of disappointment; we can do so much better. Apart from one chance when they put it over form a brekathrough in the second half, I don't think Jack makes a save. We probably had four really good chances that we have to take if you are going to win games.

"We lacked that little bit of quality today. We are still in it, we are still fighting. Everyone is looking at the league table now; we are certainly looking at it and we understand teams have games in hand. However, some of those teams are on the wrong end of form to win those games in hand.

"We will prepare, freshen up and get ready for two really tough away games in League 1 to Oxford and Peterborough.

"We can't ask any more in terms of effort, commitment, passion and hunger. These boys have been absolutely terrific. They gave everything."