Manager Steve Evans chats to the media via Zoom as Gills prepare to welcome the Sky cameras to Priestfield for the visit of Lincoln City.

The presence of the TV cameras will not get to the players, says Gills boss.

Steve Evans is looking ahead to Friday night’s televised match with Lincoln, a team he rates as the very best in Sky Bet League One.

Michael Appleton’s Lincoln sit second in the league, equal on points with leaders Hull, and boast the division’s most miserly defence and a clinical attack.

Gillingham, however, have proved that they are not to be underestimated and are currently enjoying a purple patch of their own. A four-game unbeaten run, including the comprehensive 4-1 demolition of highly-rated Crewe and a gutsy 2-2 away draw with promotion-favourites Sunderland, has seen the Gills move to within six points of the coveted play-off positions.

Gillingham’s manager sat down with the local media via Zoom to discuss his side’s performance at The Stadium of Light, share his thoughts on transfer deadline dealings, and also preview what promises to be a thrilling clash with the Imps.

“The performance was excellent; we should have got three points. We dominated for long spells, conceded a deflected goal, got back in the game, hit the underside of the bar, we gave away a penalty, which was never a penalty, but that can happen. We got our foot back in the game and in the last 25 minutes we are around their penalty box trying to score a goal. Jordan gets us a goal in the 90th minute and it was a good point, but we certainly left two behind.”

“We got James Morton in the building, a loan from Bristol City and we were very close on two others.

“James is a left-sided central-midfield player that is technically very good. He can find a pass. He’s young and he will be learning. He adds good competition to what we have got already. 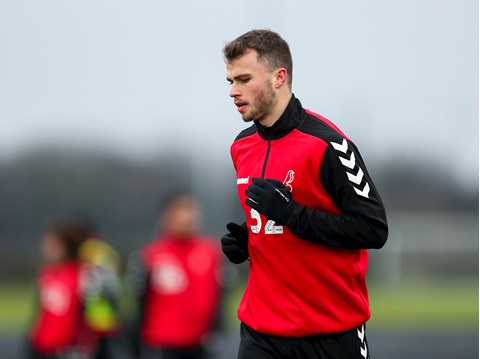 “We were within five minutes of landing a striker, everything was agreed with the player and club but we couldn’t agree with the football agent. We can’t jeopardise this football club in this pandemic.

“There are a lot of players who have severed their contracts on deadline day who will still be available. There will be options to sign players and we have resources to do it.

“It was a very good day for us in keeping players. We had offers in for Dempsey, Jordan Graham, Ogilvie and a host of clubs wanted to take Stuart O’Keefe, but our Chairman stuck strong, he wasn’t going to sink us by taking away these players.

“We have to make sure that we get through this season, and that next season there is a Gillingham Football Club. The Chairman does not get the credit that he deserves in this pandemic. He has done an absolutely brilliant job.”

“I have had enough cameras in my time at Leeds United. They don’t exist; they are peripheral. They won’t make any difference when I am screaming at my full-backs to get back or my striker to get in the box. It doesn’t affect me; I don’t see them.

“Both teams will have a few cleanly-shaven players tomorrow night and will be trying to look a bit prettier than they already are. I don’t get involved in that. We have some experienced boys. Oliver and Akinde have had enough cameras with various promotions and Dempsey and Bonham are the same. The cameras won’t affect us.”

“I think they are the best team in the league and they are stunning away from home. I’ve watched them live and I said to my staff that ‘if you finish above Lincoln, then you will be playing in the Championship next season’.

“They have two or three players for every position. It doesn’t matter to the manager if five players drop out, he can bring five quality players in. They are a terrific side; an excellent footballing side who can mix it up and Michael Appleton is an excellent coach. It will be a tough game for us but we are in good form and we have got good players. We are looking forward to it.

“Lincoln play with a back four that become a back seven when they are out of possession; it’s very difficult to go through them. A lot of teams higher up the league table than we are have failed to do it. They are the best team in the league, both defensively and offensively.

“We need to have a good night and we need to be on the front foot. We need to turn inches into yards. Lincoln are a possession based team and if they get a grip on the game they can be fearsome.

“We don’t kid ourselves, it’s going to be a tough evening but we will work to our game plan, that is what gives us a chance. We have a group of young players that are giving us everything. We have got some individuals with real quality. There will be no excuses from us.”