Gills boss Steve Evans said he was disappointed not to walk away from Fratton Park with all three points on Saturday, but took encouragement following a dominant second half performance against Portsmouth.

The scores were level at half-time with Sean Raggett’s header cancelled out by Vadaine Oliver’s effort prior to the interval, and although Gills created several opportunities in the second half, they couldn’t quite find the net for a second time to clinch victory.

Speaking after the game, the Gaffer said: "I am really pleased with the performance, particularly the second half. It was very good. We should win.

“It was also good to see Kenny Jackett back on the sidelines who has been missing for a few weeks; he’s a friend of mine and I was buzzing to see him pre kick-off. I have the utmost respect for him.
"I thought we were terrific in the second half. We have got a point when we should have had all three. I’m as down today as I was on Tuesday.

“You don’t often come to Fratton Park and miss a host of chances and totally dominate for the second half of the game, and that’s what’s happened today.” 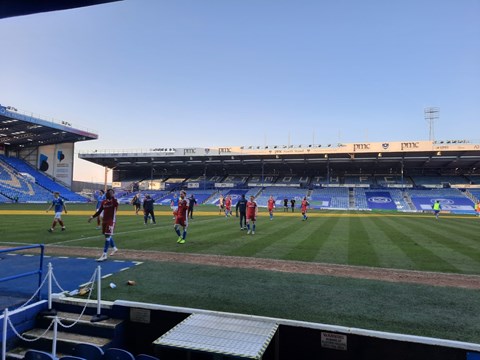 Gills were at it from the first whistle and could have had a penalty in the opening stages, but the referee waved away the appeals in a cagey opening 45 minutes.

The boss added: “We are disappointed not to be given a penalty inside a minute, we go a goal behind when we are defensively sloppy in a couple of challenges, we get back level and Vadaine does well to read that situation [a poor back pass] and score; Olly Lee forces a brilliant save from their keeper and we had a good half-time chat with the boys.

“In the second half we were terrific and if it finished four or five here it was justice for the performances, and chances, but we didn’t. We didn’t get anything from Tuesday when we deserved all three and we got a point today when we should have got all three. We should win comfortably.

“Vadaine will be disappointed he hasn’t hit the target, so will John. The balls in from Jordan [Graham] are terrific; he’s had the left back on toast for the second half.

“Kyle Dempsey had a chance on the edge of the box which was an inch or two wide. We got the chance right at the death, John goes through one-on-one and if you score you’re a hero and if you miss everyone says you should win.
“We should win the game, we haven’t, but the performance was very good."

Steve admitted he has rarely visited Portsmouth and controlled proceedings in the way Gills did on Saturday, but knows if his side replicate that type of performance then a late attack on the top six positions isn’t completely out of the question.

He added: “I think 1-1 was fair at half time but in the second half we were far superior in every department. I don’t remember ever coming here and playing a second half when my goalkeeper has had nothing to do.

“I thought Jack Tucker and Robbie Cundy were excellent against particularly difficult strikers. John Marquis came on and is one of the best in the league and they didn’t give him a sniff.”