John Akinde's penalty had put the hosts one nil up at the interval, only for the Posh to find themselves ahead with two quickfire second half goals, with Jonson Clarke-Harris adding a third on 67 minutes. 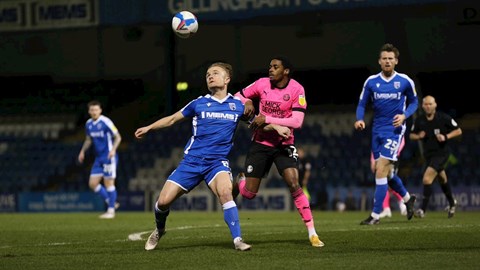 Steve was pleased with the first half display, but was disappointed to see a number of mistakes allow his former club back into the game.

After the match he said: “It was a game of two halves. We were by far the better side in the first half. We were bright, error free, strong, committed and played with a real purpose. I think we dominated them.

“I spoke at half time to the team about they’ll get a reaction; teams at the top don't need any help. They have a good manager with top players. We knew Dembele was coming on because we got the shout so we knew it was a tweak of the system, we prepared for when the lads went out, seemed in a good place.

“You cannot commit the big mistakes that we make in the first few minutes in the second half."

The Gills boss was hopeful of holding onto the lead until at least the hour mark, which would have forced a change of approach from the opposition.

He added: "I had concerns at half-time thinking one goal wasn't enough.

"When you are up against a good team who are challenging, you have to deal with the first 10 or 15 minutes of the second half properly, and we didn't.

“You just want to get 60 minutes because then they go a bit longer, it becomes a bit more predictable and opposition's normally deal with it, but we don’t give ourselves a chance. Over the 90 minutes we don't deserve any of the points; if we take out our errors we probably win.

“The second goal for them is just a straight run into the channel and the shot takes a deflection. They probably earned that with their work rate in the first five minutes. For the third we didn’t get it away, it gets intercepted and Jonson does what he does.

“We regrouped, worked incredibly hard, but if you play against good teams and you commit big errors you lose. Simple."