Jordan Graham chats to the club website following Gills 2-2 draw at the Stadium of Light.

Gills winger says the approach to Lincoln this Friday remains very much the same.

In any other season, Jordan Graham’s searing runs, close control and composed finishing would have the notoriously-vocal Gills fans regularly on the edge of their seats. Whilst stadium turnstiles remain closed, however, his trademark antics on the wing remain a wonderful sight for armchair supporters following on their TV’s, laptops, and mobile phones.

On Friday, the virtual audience will be a lot bigger when the Gills face Lincoln live on Sky TV, but Graham won’t be fazed, saying “it’s business of as usual” as the Kent side look to make it five unbeaten in Sky Bet League One action.

The attack-minded midfielder spoke exclusively with the club website to reflect on his last-minute equaliser against Sunderland, discuss the new January signings, and preview an exciting televised clash with the Imps.

Dramatic draw at the Stadium of Light

“We were gutted to have not won the game and there was a feeling in the dressing room of two points left out there. I thought it was a really good performance from the boys against a big club.

“We played really well and moved the ball nicely. The additions that have come in January have really helped us. We knew our game plan down to a tee.

“We were happy that we got the last-minute goal and we at least left with something. I think it is showing how far we have come that we were disappointed to have left those two points at Sunderland.” 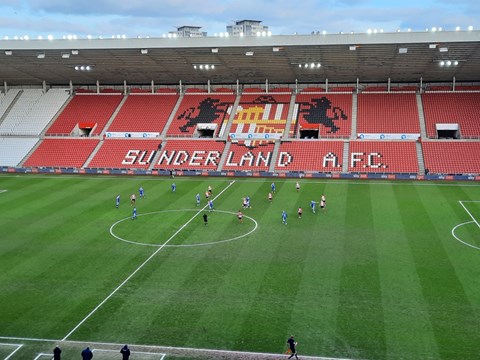 “The ball has been played up the pitch by Jack (Bonham). John Akinde has won the header and flicked it on, which has hit Vadaine (Oliver), and he has somehow managed to flick it round the corner to me.

“I saw that their left-back has got dragged over. I had that split second where I had to decide whether to hit it or take it round the keeper, but I thought wherever I would go he would block it. I knew my first touch was important then I just wanted to lift the shot into the goal so players on the line couldn’t block it. When I hit it, I knew it was in; it was a good feeling.”

Fresh faces in the team

“It’s been a good window for the club and the signings have been great additions. They have made a big difference to us and you can see that in our performances. They have added a different dimension to the way we can play.

“I knew Olly Lee from when I was here before. I really like him as a footballer. He likes to get the ball down and he gets into those pockets. He’s more like an out-and-out number 10 for us. He is classy and I really like the way he plays. He’s brought a bit more experience to the group.

“I didn’t know Callum Slattery before he came here, but he is really good on the ball and he likes to get it down and play.

“We have added some really good technical players to the group.”

“They are a really good side. I had their manager, Michael Appleton, when I was at Oxford. That loan was the reason why I went back to Wolves and was playing.

“He is a great manager and a really good guy. I have a lot of time for him. I know what he is about and the way he likes to play.

“We know what to expect on Friday, but they are coming here and I think it will be tough for them. When I was at previous clubs and came to Gillingham, it wasn’t enjoyable. No one looks forward to coming to Gillingham. They know what they are going to get. It’s high-intensity, it’s a small pitch, we are in your face, and we make it tough to play.

“That’s what we will do on Friday. We will make it as hard as we can and get in their face. We will do what we know we are good at and hopefully leave here on Friday with three points.

“I’ve played on Sky two or three times and won Sky `Man of the Match` for Wolves against Forest. I have fond memories of playing on Sky. There is no added pressure that we are on TV or if there are crowds here or not; it’s in the back of my mind. It’s business as usual for me. We want to go out there and win.”