John Akinde came off the bench against Rochdale on Saturday to salvage a draw for the Gills and said, “it was good to hit the back of the net, but we wanted all three points.”

The imposing forward fired home an unstoppable 93rd minute close-range volley in front of a deserted Rainham End to level the score at 2-2, just as the game appeared to have slipped away.

The Gills, now unbeaten in their last two, will return to the training ground to prepare for their Sky Bet League One clash with Crewe on Tuesday and Akinde is determined to take maximum spoils to make up for the dropped points.

The striker said after the Rochdale draw: “We wanted all three points today and we want all three points on Tuesday. We know we have to improve and we will do. We look forward to Tuesday night and getting a win, that’s the aim.

“We didn’t lose against Rochdale so we have to take the positives.” 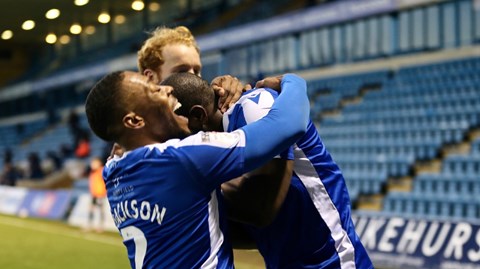 Akinde will have fond memories of the last time he faced the Railwaymen in early November. Gillingham had weathered an attacking storm at The Alexandra Stadium, with inspired on-loan keeper Joe Lumley and the woodwork coming to the rescue, before Akinde climbed off the bench to make them pay, scoring the winner with a thumping header within three minutes of joining the action.

He said: “I just want to do well, whether I am starting or coming off the bench. I want to score against every single team I play against.

“I just try and get myself in the position to get the chances to score goals. That’s what I’ve done throughout my career and I will continue to do so.

“We are aware of how Crewe play and their strengths and weaknesses. We are looking forward it.

“When we played them earlier in the season they did have a lot of chances but we came away with the points. We want to do the same again.”