On-loan winger looking forward to spell at ME7.

No sooner had recent capture Tyreke Johnson penned his loan deal on the Friday, he was lacing up his boots for his first start against Burton on Saturday, and he showed enough early promise to suggest he will be a real asset to the Gills. 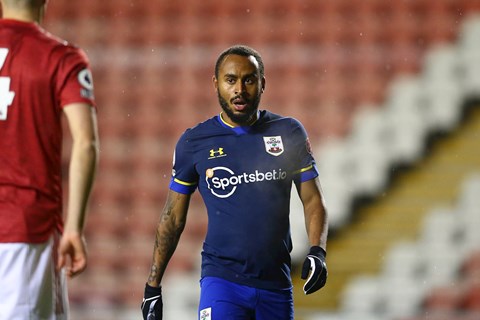 The attacking midfielder, who joined from Premier League side Southampton, told the club website that he is ready to hit the ground running, saying: “I’m getting an understanding each day how things work around the club and how we play. I want to play as much as possible. I like to create chances just as much as I like to score.”

Johnson, with the south coast side since a schoolboy, made his Premier League debut in a 3-2 win over Arsenal in 2018 and has since featured for the U23 team as well as benefiting from a productive loan period with American side Hartford Athletic, scoring twice in his 15 appearances.

With his versatility and desire to prove himself at MEMS Priestfield Stadium, the January signing may perhaps become a key element in a Gillingham squad who are looking to move up the Sky Bet League One table.

Johnson said: “I have played in a few positions. I’ve played as a winger, a full-back and a striker. My main attribute is being a winger and getting at players, putting in crosses and getting on the scoresheet as well.

“I just want to come here and get some games under my belt. I want to keep learning my trade.”

The Saints are known for having one of the best youth academies in England, with their talent conveyer belt producing homegrown players such as Alex Oxlade-Chamberlain, Luke Shaw, Theo Walcott, Adam Lallana and Gareth Bale to name but a few.

Johnson will recognise another face from that same academy in the Gills changing room, fellow Southampton loanee Tom O’Conner. The young Irishman is enjoying his second spell at ME7 and his presence should help new signing Johnson settle in quickly.

Johnson said: “I’ve played with Tom for a few years now so I know him quite well. He was left-back and I was left-midfield in the Burton game, and it makes it easier on match day.

“It is great that he is here with me but to be fair to all the lads, they are very welcoming.”

Johnson was disappointed that his debut ended in a 1-0 defeat, but he saw enough from his new teammates to give him belief that brighter times are just around the corner.

He said: “We had a lot of chances and it is a shame we didn’t put them away. It was looking positive by the end of the game and we put on pressure. If we had started like that we could have got a result but we were unlucky. We are positive in the camp and we want to make it right. Hopefully on the weekend we can get the three points.”