On-loan Hearts midfielder believes the Gills squad is looking good ahead of a busy fixture period.

An ambitious Olly Lee described his move to Gillingham as an unexpected surprise and now he is back he is looking to “upset the applecart and get in those play offs.”

The combative-midfielder, who signed on loan at MEMS Priestfield Stadium last week for his third spell, is determined to lay down his marker against free-scoring Rochdale on Saturday, in what promises to be another difficult Sky Bet League One fixture. 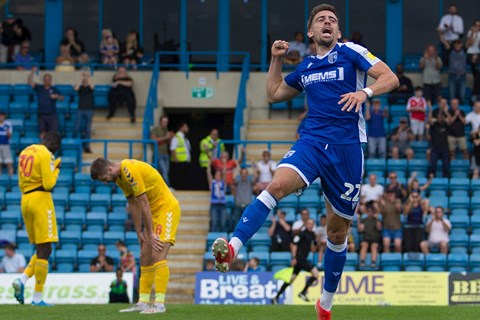 Olly, speaking to the local press ahead of the game, said: “I didn’t come to a team that is just going to sit around in mid table and not be bothered by anything. Whether we can make the play-offs or not, it won’t be through a lack of trying.

“I’ve been really surprised how good our team is looking. It’s only been one game, so I don’t want to get ahead of myself, but I think we have a strong spine in the team. We’ve got good players who can score a goal and we’ve got players who can keep it out of the net; we’ve got a bit of everything. We are not one of the big hitters like Sunderland or Ipswich but player for player I would fancy us against anyone."

After a chance phone call to Hearts from Steve Evans, the wheels were set quickly into motion and the Gills boss’ managerial style proved to be a huge factor in Olly’s positive decision.

He said: “If we want to do anything this season then your home form is always important. The home form always backs up the teams that are up there at the top of the league. We were hard to beat last season when that Rainham End use to suck the ball in.

“Rochdale are always a good side; we had some good games against them last season. I’ve seen Rochdale’s recent results where they have had 3-3s and 4-4s, so it should be an exciting game.

“They keep the ball well so it’s going to require a lot of effort to get a positive result. They have shipped in a lot of goals but have scored a lot of goals against good sides too. They can be a threat but we have got to be ‘at it,’ work hard and not let them get their passing game going. We think we have the players to hurt them, so we have to go out and show it.”