Gaffer pleased with effort at Colchester, but knows a lot needs to be worked on before the new season begins.

Gills boss Steve Evans said he was pleased with what he saw from his team on Saturday against Colchester, but says the camp are “in a race against time” to be ready for the opening game of the League 1 season on August 7 against Lincoln.

The squad had two first-team fixtures cancelled due to an outbreak of COVID, impacting the club’s pre-season schedule, but the manager says everyone will stick together and work as hard as possible to play catch up. 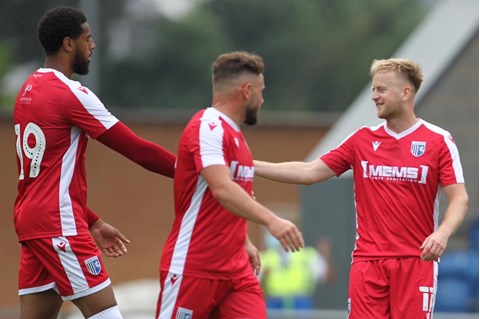 Speaking to the media after the game he said: “I think it was very rusty, I’m not questioning the effort and desire – that’s our second time on a Football pitch proper since last May and we’ve almost had two breaks with COVID and last week was particularly tough when nine of the players had it, with three or four of the staff, so we had to take an enforced break and other clubs are going through similar things.

“I’ve seen a lot of things that I liked, a lot of thing we need to work on. Timings and touches will only get better, but we are in a race against time to be ready for Lincoln.

“I think there was some good defending, some sloppy bits in the middle of the park but when it came into the box we won first contact 95% of the time which was a plus, and I’m pleased with a lot of them. I thought Ben Reeves was very good, but I was pleased with them all. Energy was good.

“When the going gets tough, you get up and fight and we lead our troops to battle.

“At one point we were training with four players and we had to call a COVID break. Our medical team called it; I had to make a decision that I knew was right for all of us, but I knew it could hinder us.

“We are trying to work the players during the week; they came back in Wednesday and have worked really hard. Some were still stiff from running yesterday. We tried to get two or three of Colchester’s boys but got nowhere near it.

“It was good for us; they are five games into pre-season and we’ve only had 45 minutes at Welling so we are pleased where we are as a benchmark given the opposition.”

Gills welcome Millwall to MEMS Priestfield Stadium on Tuesday evening and the manager is hoping a goalkeeper will have been added to the group by then, although Ryan Jackson is likely to sit out.

He added: “Ryan felt his hamstring tighten, that might be a week, 10 days. We won’t panic; we have Robbie McKenzie fighting to be fit. We are small and limited, but if I need to go into the market for a right-back I’m sure the Chairman will support it.

“If we include a keeper, we need four players. Looking at the numbers, if you take away the kids, we have 16 senior players. We need 18 or 19, backed up by the kids you’ve seen today and one or two of them really excite me. Bailey [Akehurst] and Harvey Lintott, young Gerald [Sithole] we haven’t seen due to an ankle knock. He will also play a part.

“The next three signings need to help the group; League 1 is so tough this year.

“We’ve come to an agreement with a club about goalkeeper, that should happen over the weekend then we are two or three players away from being ready. He’s coming on loan for the season and is highly regarded; I watched him five or six times last season. We were in a queue; we have had to wait, make the argument and we are hopeful he will sign the papers and join us.

“I don’t think any of the players are ready for 90, we are just not. We’ll probably look at that when we get to Norwich. Certainly [on Tuesday] towards 70 or 75; it will be a different team with perhaps a different system.

“We need to make sure we have given everyone in the group the opportunity to have those minutes.”