Centre-back raring to get his second Gills spell underway.

Max Ehmer said it was a "no brainer" to head back to Gillingham for a second spell. 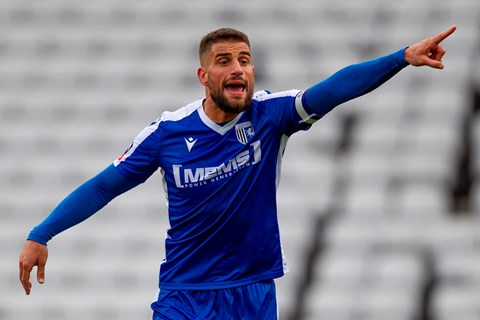 The 29-year-old left for Bristol Rovers last summer but has returned to the MEMS Priestfield Stadium after just one season away, and the former club captain could not hide his delight on agreeing to come back to ME7.

“I’m over the moon to get back to Gillingham. I can’t wait to get started, and it’s not long from now, and I think we’re back in on the 28th [of June], so it’s good in terms of signing it and then getting straight back to work. I’m really pleased and can’t wait.

“It just feels like home, and coming back was a no brainer. There were no second thoughts, and I was coming back no matter what.”

Ehmer struggled with a shoulder injury last season, and he missed the final two months of the season as he underwent surgery to correct his issues.

Despite wanting to battle on until the end of the campaign, the 29-year-old admits that the way events panned out were much in his favour.

“Last season, all the ligaments had basically gone, so it was a case of trying to manage it until the end of the season.

“Then I was allowed to get it done before that. So in terms of timing, it worked out perfectly for pre-season.”

With pre-season fast approaching, Ehmer has begun his preparations for one of the most intense periods of the year. However, he knows that he and his teammates are all looking forward to the same thing.

“You’ve got to do your pre-pre-season running, which I’ve been doing lately," he added.

“I’m sure all of the boys will say the same thing, and everyone’s looking forward to getting back in, getting the running over and done with and getting the games started.”

Ehmer is hopeful that his first game back at Priestfield will have supporters. Having been a Gills player for over five years, he knows just how crucial their support will be for this upcoming season.

“From my previous time here, they’ve always been the 12th man, and they know that as well. It’s been spoken about numerous times in the past by different players, managers and whoever else.

“Hopefully, next season, they will be that 12th man again and help us kick on even more in the division in terms of finishing higher up.”