Boss delighted after 3-1 win at the County Ground.

Vadaine Oliver bagged himself a brace in five second-half minutes as Gills cancelled out Brett Pitman’s opener. Kyle Dempsey got the third from a free-kick as Evans’ side climbed back into the top half following a 3-1 victory. 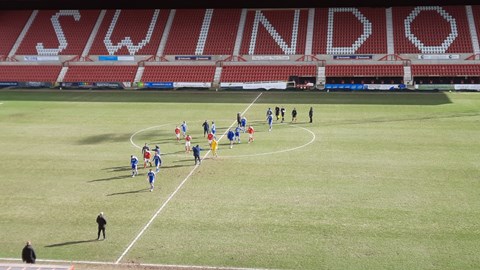 Despite falling a goal behind, Evans felt upbeat about his side’s chances of taking something from the game. The changes he made had a big impact, and he was full of praise for them.

Evans said: “We changed the system two or three times in that second half, we made some changes and had positive impacts off the bench from Alex MacDonald and John Akinde.

It has been a week full of travelling for the Gills with two games on the road in the space of four days.

Having played at Fleetwood on Tuesday night, Evans was more than impressed with how his squad have dealt with the strenuous week.

The 58-year-old said: “It was an outstanding performance from the lads who got back to Medway at 5am on Wednesday. We had to turnaround quickly, train Thursday and Friday, then make the trip up to Swindon, which is still a two-and-a-half-hour trip from Medway.

“There’s some real character in that dressing room. A number of the players were outstanding, and [Robbie] Cundy was the best for me.”

Oliver's brace set Gills on their way to all three points, and Evans was happy with how the club's top scorer went about his business.

He said: "I think he led the line with a real presence like he does most weeks. He really led it today, and John [Akinde] came in and marshalled it with him as well.

"We were really pleased with him."