Spirit in the camp is brilliant, says Gills boss.

Steve Evans says his Gillingham players are “fighting like warriors” as they battle to edge themselves into the play-off mix.

After Saturday’s hard-fought 1-1 draw away at league-leaders Hull, the Gills welcome a Wigan team on Wednesday who are scrapping for survival. 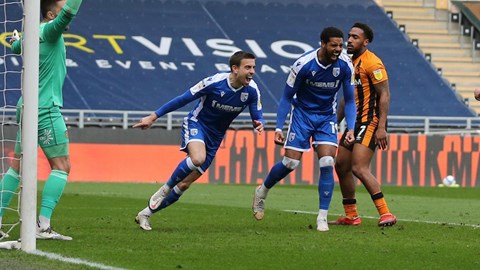 With just nine games to claw themselves out of the bottom four, the relegation-threatened Latics could prove a dangerous opponent, but Evans is confident his players are up to the challenge.

Speaking with the local press on Zoom ahead of the Sky Bet League One clash, the Gills boss said: “Wigan will be a difficult game, they have just drawn with Ipswich Town, which is no mean feat. That tells you how difficult our challenge will be on Wednesday. If we could get three points, it will make Friday (when Gillingham’s play-off rivals play) interesting.

“We have a group of lads that really care and we have some especially talented players. If we can keep them focused, fresh and working hard and we remind them what the prize just might be, wouldn’t it be interesting to be five points off those big budget teams with five games to go. There will be some nervous players and managers not being able to sleep.”

In-form Gillingham have only lost once in their previous eight games, and recent strong displays against some of the league’s high-fliers have fans at home daring to dream. Evans says his players deserve all the credit that’s coming their way and expects them to keep standards high in their remaining fixtures.

He said: “The boys are working so hard, they are taking on board ideas and instructions. They work hard for each other. When you have a group like that, then they can achieve the impossible. We move to eight games to go and we are still fighting tooth and nail to haul ourselves into the play-off group.

“Our boys are impeccably fresh and there is a real buzz about the team; some days we have to drag them off the training ground.

“We have talented players, players that are so committed. I am proud of every one of them. We will see what we can achieve at Priestfield on Wednesday.”