Steve Evans praises the fighting spirit of his Gills team after defeating Lincoln.

Steve Evans said his side deserved a lot of praise following Tuesday’s 3-0 win over Lincoln at the LNER Stadium.

Gills bossed the opening 45 minutes at Sincil Bank and went two goals up thanks to the in-form Vadaine Oliver, and skipper Kyle Dempsey. 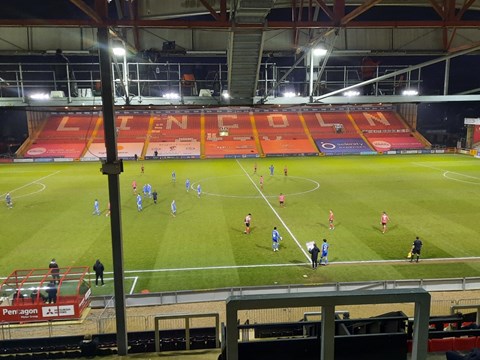 The visitors had to be defensively resolute after the interval, but sealed the points late on thanks to a Jordan Graham penalty, which puts Gills within touching distance of the play-offs.

Speaking after the game, the manager said: “We’ve had a lot of outstanding results and that’s credit to all of the boys that we have got who are working so hard to achieve them.

“V has a terrific header and then the front lads combine again and set Kyle Dempsey free for a second goal, and Kyle has been working on those runs day after day with Paul Raynor and the coaching staff, making runs in behind the striker and he gets away and it’s a good finish.

“And that’s when we should have put them to the sword; they were really scrambling to get to half-time and my thoughts to the team were that we should have buried it, the third or fourth goes in and its finished. It didn’t happen so we knew we had to work incredibly hard, and the boys have!

“We were strong tonight in a lot of areas and we had to work as hard as we did but there was a lot a really good intensity to our performance. It could have been five or six in the first half quite comfortably with the chances we missed but I would rather be in charge of a team that misses chances and is creative, rather than not.

“The ugly side of the game, the boys were brilliant in chasing lost causes, putting their heads in the way and I am really pleased with all of them. I can’t single any of them out.”

The Gaffer made two changes to the side that beat Swindon at the weekend, with John Akinde starting up front with Oliver, and the manager said it was a call designed to win the game with points very much needed at this time of the season.

He added: “We made it quite clear in our team selection that we had to look to win the game, we had to do it in a certain way. If you come and take Lincoln City on with the quality they’ve got and say `you play, we play, ` we get beat, it’s as simple as that.

“We had to find a way to win. Our way of winning tonight was to come and be solid, strong, be industrious and take opportunities if they come and three nil, if anything, probably flatters the home side.

“We will work with whatever XI we have to pick, whatever 17 or 18, we just work with them and we believe in this group. We represent Gillingham Football Club, the only pro club at this level in Kent. We need to do it with as much pride as we possibly can.

“I said to the front two give me everything you’ve got. I can’t live with a lack of effort, that’s a problem to me, and they’ve given me everything, they have all season, so no complaints.”